I love dog and cat paws, I think they both are unique, and I like the squishy feel of their pads. But have you ever stopped and thought, what is the difference between a cat paw print and a dog paw print?? Or maybe I am one of the only ones who thinks that way. I thought it would be fun to share the difference if anyone is interested as much as me! Next time you see a paw print in soft dirt, snow, or even after a rain in mud, you will be able to decipher if it was a canine or a feline.

My husband grew up on the farm, so he knows many types of paw prints he would come across in the yard, drive, or around the home. Possums, raccoons, coyotes, dogs, cats, and the list goes on. He can even tell what type of tire it is by the tread. It is safe to say he is very observant and over the years of looking at prints, he began to learn what each animal was, and even tire tracks that come in the drive. Since we have been married and moved to the country, you see all kinds of prints out here. We have a lot of deer, turkey, possums, raccoons, skunks, coyotes, and even more wildlife. I am slowly beginning to learn what tracks are what. It can be kind of fun trying to guess! But today I will keep it pretty basic, dog vs cat paw prints!

How sharp are the nails?

I already mentioned in the video that wild canines will tend to have much sharper nails. With a bit of comparison this is fairly easy to spot.

Another great way to tell cat vs dog tracks is by the gait pattern.

A gait pattern means the way an animal actually moves.

In general – Canines tend to move in a trotting pattern, while cats almost always move in a walking gait.

The exception to this rule would be in the case of domestic dogs, as I’ll explain in the section on telling domestic dog tracks from wild canine tracks like foxes, coyotes & wolves.

Studying animal gaits is a bit more complex than just looking at individual tracks, however when it comes to identifying cat and dog tracks, it is an extremely useful technique.

I covered animal gaits with a bit more detail in my online guide to animal tracks so check that out if you’d like to learn more about this technique. 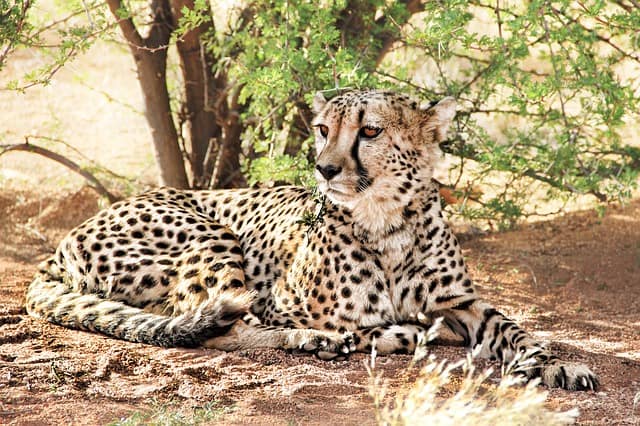 See the claws? This actually blew my mind.

Somebody pointed out to me that Cheetah tracks are an exception to the rule of cats having retractable nails.

Here’s a great blog post about the differences between Cheetahs and Leopards that explains why Cheetah claws are non-retractable.

It’s a good reminder of why you should never rely on just one identification feature.

​If you spot one of the features I mentioned in that video… always look to see if you can observe the others as well.

The golden rule that really does ALWAYS apply is that the more clues you have the more confident you can be about an animal’s identity.

It’s finally snowing which means animal tracks are highly visible. But what kind of tracks are you seeing? You can generally tell your dog’s tracks from your house cat’s but can you identify a mountain lion print from a your dog’s or a bobcat track from a coyote’s?

Ok, so you have figured out whether the track is from a canine or feline, but now you want to know exactly what animal it is from. This is where the size of the track can be important. The larger the track the larger the animal that left it!

When you see a track you first want to determine if it is from a canine or feline.You can start by looking at the shape of the print. Is it more of a rectangular shape or square? In general canine tracks are longer than they are wide (rectangular) while feline tracks are more even in their height to width ratio looking more square.

Can you see claw marks? Canine tracks will have visible claw marks which are usually not seen on feline tracks. But careful! Just like you put chains on your car, felines will keep their claws out for extra traction on slippery surfaces.

How can you tell the difference between a cat and a dog track?