Lets be honest: We find dogs of all colors and sizes adorable. Despite this, black dog breeds face challenges—and not just the struggle to photograph their good sides! (Although their dark coats do consistently appear as a two-dimensional dark blob in pictures or washed-out enough so that you can see their form.)

No, dogs with black-colored coats are the least likely to get adopted from shelters, according to the American Kennel Club (AKC). Psychologist and AKC Family Dog contributor Stanley Coren, Ph.D., surveyed his lab and found that black Labradors are perceived as “27 percent less friendly” than blonde counterparts. But just as you wouldn’t judge a book by its cover, you shouldn’t write off a canine for its coat. If you’re interested in adopting a pup who might have an unfairly hard time finding a forever home, keep your eyes peeled for any of these lovable black dog breeds at your local shelter.

While this breed’s shiny black coat is broken up by white and caramel colors at the snout, chest, and paws, its people-pleasing personality may sway you to let him on the list with these other all-black canines. “Their strength and size are contrasted by their calm, loving nature toward their families,” Purina writes about the breed, which reaches 80 to 115 pounds in adulthood.

Dont be fooled by the Gordon Setter, with its glistening coat—this dog is more than just a looker. The AKC describes these black-and-tan bird hunters as “built to withstand their homeland’s tough terrain and foul weather,” much like other Scottish breeds. Indeed, this 45- to 80-pound black dog features a sturdy frame, balance, and an outdoorsy attitude.

Famous for recent White House resident Bo Obama, the Portuguese Water Dog is an intelligent, active, even water-loving breed with curly coats and webbed feet from a long past of assisting fishermen. Though not specifically hypo-allergenic, the medium-sized black dog breed doesn’t shed quite as much as others, which may seal the deal for dog-loving households that include light allergies.

This old German dog breed is active, intelligent, and confident—overall, a great addition to the household of an experienced dog owner. Though a large guard dog (weighing in at anywhere from 80 to 135 pounds), aggression isn’t a given for this muscular breed; as with most species of dog, temperament has much to do with how early you start training and how often you socialize the pet.

While black Scotties are commonly pictured, these terriers do also have gray, wheaten (a sandy blonde), or brindle (a multicolor striped pattern) fur coats. With any, you’re looking at the personality of a “big dog in a little dogs body,” Hill’s Pet Nutrition profiles: high energy, excitability, and independence. Though the 10-inch-tall animal may seem the perfect height for toddlers, this breed is best for adult households or those with older, respectful children.

Labrador Retrievers, a breed that features yellow and chocolate colors as well as black, have held the top slot in the AKC’s annual popularity rankings for the past 28 years. It’s no wonder, when these medium-sized, “famously friendly” animals take so well to training and enjoy play with any household member with the time.

One of the newest breeds, dating back only as far as the end of the 19th century, the svelte, 60- to 80-pound Doberman Pinscher brings together bits of Rottweiler, Black and Tan Terrier, and German Pinscher. This natural guard dog likes a challenge, both mentally and physically, so keep him on his toes with new tricks in the kitchen and constant exercise out in the yard.

This black dog breed, often seen with wiry black fur, stands 27.5 inches tall at the shoulder—at least 8 inches larger than the Standard Schnauzer and 15 inches taller than the Mini—and weighs 95 pounds. And those long legs need the exercise! “Giants want to be with their owners and cannot abide being ignored or left in the yard,” the AKC says, advising against ownership unless you’re prepared with a fenced in yard as well as plenty of time to play.

Despite its overbearing size, dramatic coat, and wrinkles, this variety of Mastiff is more of an old soul than a massive guard dog: sweet, sleepy, and simply majestic. “As long as you don’t mind the excessive amounts of drool those droopy lips can create, the Neo believes he’s a 200-pound lap dog,” Canine Weekly writes.

Picture Nana from Peter Pan: A gentle giant padding along after the four children of the house. Playwright J. M. Barrie perfectly captures the sweetness and protection that the 100+ pound dog will exhibit toward its family. Just know that this black dog breed’s good looks dont happen overnight; its long hair needs lots of extra attention to prevent matting. 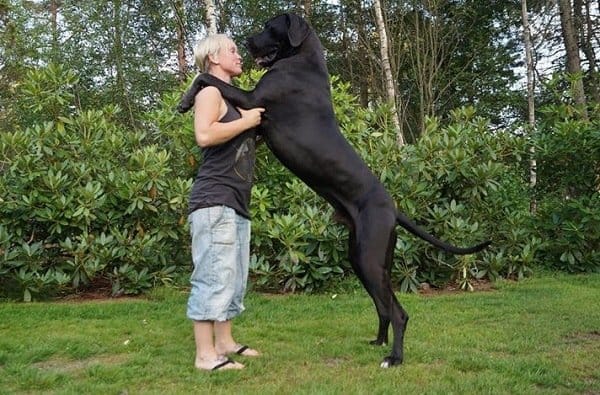 Things to Consider When Looking for a Large Black Dog Breed

If you think it’s time to add a big black dog breed to your family, there are some things you should keep in mind that not all people need to be concerned with as they look to add a furry member to their family.

Look for Black German Shepherd puppies that were born to a litter where at least one parent has standard coloration.

That’s why it’s crucial to look for a puppy from a breeder that does plenty of health testing on their breeding animals to reduce the likelihood of producing puppies with those health conditions.

Big dogs can be a handful for unprepared owners, so many shelters and rescue groups are full of big dogs, even big black ones.

Adopting a big dog is a great way to save a life; just be aware that you don’t know how much training or socialization the dog may have received, and they may have behavioral problems you will need to work with.

You also need to consider your living conditions.

Do you have the time and energy to make sure your large dog gets plenty of exercise? Do you have a yard for them to romp around in? Do you have small kids who could get bumped into by a large dog?

Make sure you’re ready for the responsibility of having a large black dog breed before bringing one into your home. 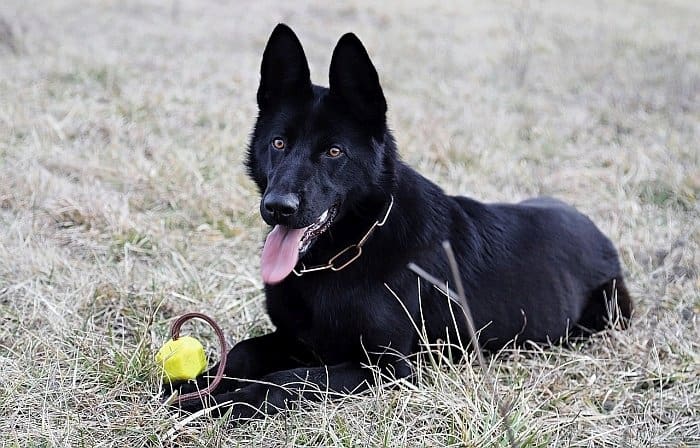 You’re probably familiar with the typical black and tan coloration of the German Shepherd Dog (GSD), but did you know they also come in all black varieties?

Thanks to the recessive gene, it’s possible for two German Shepherds with normal coloration to produce one or more puppies that are all black.

The German Shepherd is the 2nd-most-common dog in the United States, and for good reason. They are easy to train, intelligent, and friendly to most people, although they will protect their family if they sense a threat.

Since German Shepherds were bred to work, Black German Shepherds need plenty of exercise to keep them happy and healthy. A GSD that doesn’t get enough exercise or mental stimulation is likely to become destructive and may even find creative ways to escape your backyard.

German Shepherds are very prone to hip dysplasia and other joint problem, especially if they come from show lines rather than working lines.

Like always, look for a breeder who does health testing on their breeding dogs to ensure healthy puppies.

What dog breeds are pure black?

1. Great Dane. A true icon in the canine universe, the Great Dane is revered for their size, but you can be sure their hearts are just as big. This big black dog breed is affectionate not only with their loving owners but to all other pets, should they have any furry pals running around.

What breed is a massive dog?