If you own a small dog, you’ve likely had to endure a joke or two about how a hawk might one day come along and snatch your beloved pet. Unfortunately, hawk attacks are no laughing matter. A quick internet search will reveal dozens of videos and news reports of hawks swooping down on unsuspecting pets.

Every responsible pet owner should know how to protect small dogs from hawks. Understanding the threat could help prevent your furry friend from serious harm.

What Are Hawks Afraid Of? Deterring & Scaring Off Predators

Like many other predators, hawks and owls are always keen to avoid danger. This not only includes obviously dangerous things, like hunters and other predators, it can also include things that are simply odd or unusual.

So, there are a few things you can do to try to frighten them away or discourage their presence.

However, all hawks and owls are individuals, and some are more easily frightened than others. This means that you may have to try a few different methods or products to find one that’ll work.

A few of the best products that may help frighten off hawks are detailed below.

Why Do Hawks (and Other Birds of Prey) Attack Dogs?

Hawks and other birds of prey don’t go around picking fights with dogs for no reason.

Dogs, like other prey animals, tend to fight back, which can cause injuries or death for the bird. So, hawks pick and choose their battles.

This means that hawks and owls usually initiate attacks for one reason: hunger. 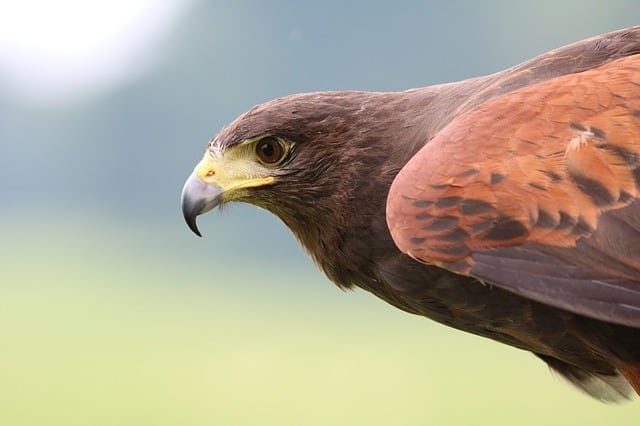 However, hawks and other birds of prey may also launch an attack if they feel threatened by your dog or view it as a competitor.

This is usually associated with hawks that are guarding their nests and offspring. In such cases, the hawk or owl may try to drive off dogs that are within 150 feet or so of the nest.

It’s important to note that these defensive attacks aren’t limited to small dogs. Hawks and owls may even attack animals much larger than themselves in some cases. People are occasionally “buzzed” by nesting hawks and owls.

But fortunately, most of these defensive attacks do not include serious physical contact. However, when significant contact occurs, it can result in very serious injuries.

The following clip shows what it looks like when a great horned owl attacks a dog. This appears to be a territorial or defensive assault, rather than a predatory response, as that dog appears much too large to for the owl to subdue.

(Don’t worry: The dog is completely unharmed in the clip.)

Note how silent the owl is while descending and how quickly the entire sequence unfolds. The lucky canine doesn’t even notice the owl swooping down behind him. Were that dog smaller, or this a predatory attack, the outcome could have had a much more tragic result.

For that matter, if that owl had simply made significant contact with the dog, she may have been able to inflict serious wounds anyway.

Birds That Attack Dogs: The Culprits

Just about any large bird of prey may decide that your pooch looks palatable. Mother Nature doesn’t have many hard-and-fast rules about what is and is not on the menu.

That said, the three species below are likely the most common dog predators:

How do I protect my dog from hawk attacks?

This is because hawks aren’t able to carry anything that is heavier than their own body weight. Their wings are not strong enough to carry excessive weight. Therefore, most dogs and even cats are large enough to be too heavy for hawks to pick up, despite what you might have read elsewhere.