Although bad publicity tells the opposite, Pitbulls are a dog breed that’s very loved and appreciated by dog lovers all over the world. They’re smashing and adorable thanks to their lovely coat color and the cutest Pittie smile ever!

Pitbulls come in a variety of coat colors, but today, we’ll be talking about a very handsome one – the black and white Pitbull.

Black and white Pitbulls are normal Pitbulls with a specific coat color. Still, they’re not as rare as you might think. Most Pitbulls have a dominant black shade in their genes.

What makes these dogs so special, besides their incredibly good looks, is their even lovelier personality.

Let’s talk about how great the black and white Pitbull is and, once and for all, break stereotypes!

What Is a Black and White Pitbull?

When discussing Pitbulls, we usually tackle major coat shades as well as the red and blue-nosed breeds. A black and white Pitbull falls between the all-black and all-white Pitbull coats.

Another thing that is always seen with a Pitbull is even black and white marks on the face or body. Still, black and white Pitbulls are a sight to behold, and they are very pleasing to the eyes.

What Makes a Black and White Pitbull Different from Other Pitbulls?

The main difference between this coloration and other coat colors lies in the parent’s genetic make-up. If both dominant color genes are inherited, then there is a high chance that the offspring will be black and white.

Recessive traits in dogs are defined by pure-white coats. This can be a rare case in Pitbulls.

Another difference between this type of Pitbull and other Pitbulls is the location of specks and marks. White-colored splotches are usually seen in chest regions, with others having marks that extend to the face.

Black and white Pitbulls, especially those that lean more on the darker side, are commonly branded as aggressive. This can be traced back to their days as fighting dogs.

Because of this, such color is stereotyped by many people in a bad way. These are all just controversies since a dog’s behavior is always dependent on training.

Do Kennel Clubs Recognize the Black and White Coloring?

The AKC does not recognize the American Pit Bull Terrier and American Bully, but they are recognized by the United Kennel Club (UKC).

The American Pit Bull Terrier is a medium-sized, solidly built, short-coated dog with well-defined, smooth musculature. This breed is powerful and athletic.

The American Staffordshire Terrier, otherwise known as the AmStaff, is a very bulky and muscular dog. It reaches about 18 to 19 inches at shoulder height.

It is common to see black AmStaffs, especially black with white patches on the chest. This is due to the genetic mixing of the breed. Originally, these dogs came from English Staffordshire Terriers.

But, U.S. based breeding allowed them to be larger than their English counterparts. This breed was recognized by AKC in the year 1936.

Staffordshire Bull Terriers or staffies are the smaller counterparts of AmStaffs. Their average height is only 14 to 16 inches, which is shorter than the AmStaff.

Similarly, they are lighter than their American relatives, weighing only 31.5 lbs on average. When it comes to appearances, they have the same jaws, eyes, and builds as the AmStaff, albeit smaller.

Like their American counterparts, a black coat with splotches of white is common for Staffies.

The American Bully is the bulkiest and most muscular among other Pitbull breeds. They have very short legs which makes them shorter than their ancestors, the AmStaff and the Staffy.

The Bully is the shortest of the four, with heights reaching 13 to 21 inches. When it comes to weight, they are the heaviest, ranging from 70 to 120 pounds. Any color combination including black and white is acceptable for American Bullies, except for merle.

Like the previous breeds, it is also common to observe black and white coloring for American Bullies. Such color combination is very prevalent in Pitbulls due to the genetic make-up of the species. 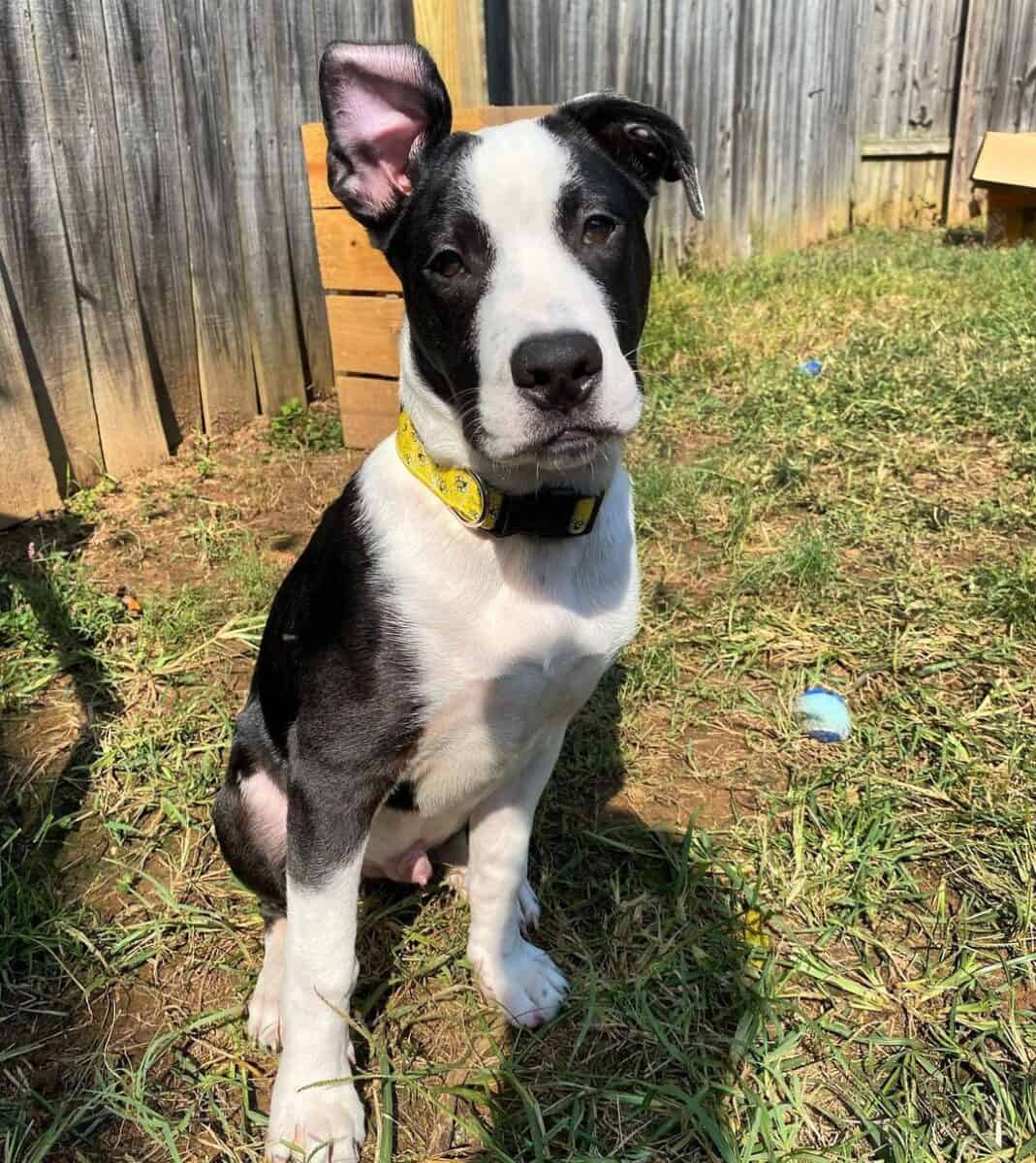 The black and white colors in Pitbulls are seen to be the “dominant” trait in genetics. This means that most dogs of such breed will carry the coating characteristic. The “recessive” or the rare trait is the white color as well as blue eyes. This makes a pure-white Pitbull harder to find.

To get a black and white Pitbull with the highest probability, it is recommended to breed two healthy black parents. Since the dominant trait is observable from both parties, there is a high chance that the litter’s color will be the same as the dam and sire.

One thing that is hard to predict is the location of white markings in the body. Some puppies may not show white marks if the dominant trait is strong.

You can expect most of your puppies to have white patches on the chest, which sometimes extend to the face as this is a common occurrence in the breed.

How much is a black and white pitbull worth?

What is the rarest color of Pitbull?

Most breeders charge around $1,200 for their dogs. However, extremely high-quality dogs can cost as much as $10,000. These dogs are quite common at animal shelters.