Is the white Pitbull a rare color, or are they just as common as the rest? Some breeders charge more for a Pitbull with a white coat, but what’s the reasoning behind that? Pitbulls with white coats inherit that color from birth, and are often bred by breeders specifically for this reason. Just make sure that your pup is actually a White Pitbull and not a Dogo Argentino that looks very similar.

The American Pitbull Terrier actually has a wide variety of coat colors to choose from. From silver, fawn, brindle or reverse brindle, red, or blue, he pretty much has a choice of the whole doggy rainbow spectrum. And one of the most beautiful and popular colors of them all is brilliant white.

We look at this snow king in all his glory. From his looks to his temperament, and what makes him different from any other American Pitbull Terrier. We’ll also take a closer look at the genetics behind his beautiful jacket. And the difference between him and Pitbulls that suffer from albinism and leucism (don’t worry, we’ll explain it all).

To understand what to expect from a White Pitbull, you need to know a little about the Pitbull’s history. In the 19th Century, the British favored dogfighting. They crossed Terriers and Bulldogs for their incredible strength and fighting ability. And it is these guys that were the Pitbull’s ancestors. The sport was banned, but their humans sailed them to America to continue the sport.

There, the biggest and most powerful dogs were bred to create bigger dogs, and it was these larger dogs that became known as the American Pitbull Terrier. His dogfighting and rat pitting history has led to his unfair reputation today. But thankfully, he is becoming more popular and recognized as a family favorite. White versions of Pitbulls have always been around, as they are just the same as any other color Pittie. They are just rarer than other colored Pitbulls.

What Is Considered a Pitbull?

The American Bulldog, along with any crossbred dog that shares certain physical characteristics with these breeds, are also sometimes considered pitbulls. So really, the term “pitbull” is not a breed at all, but a label that is used for dogs who descend from Bulldogs and Terriers.

In this article, the word “pitbull” will be used to refer to all of the above due to the fact that they all share the same origins and genetic makeup of the “pitbull.” 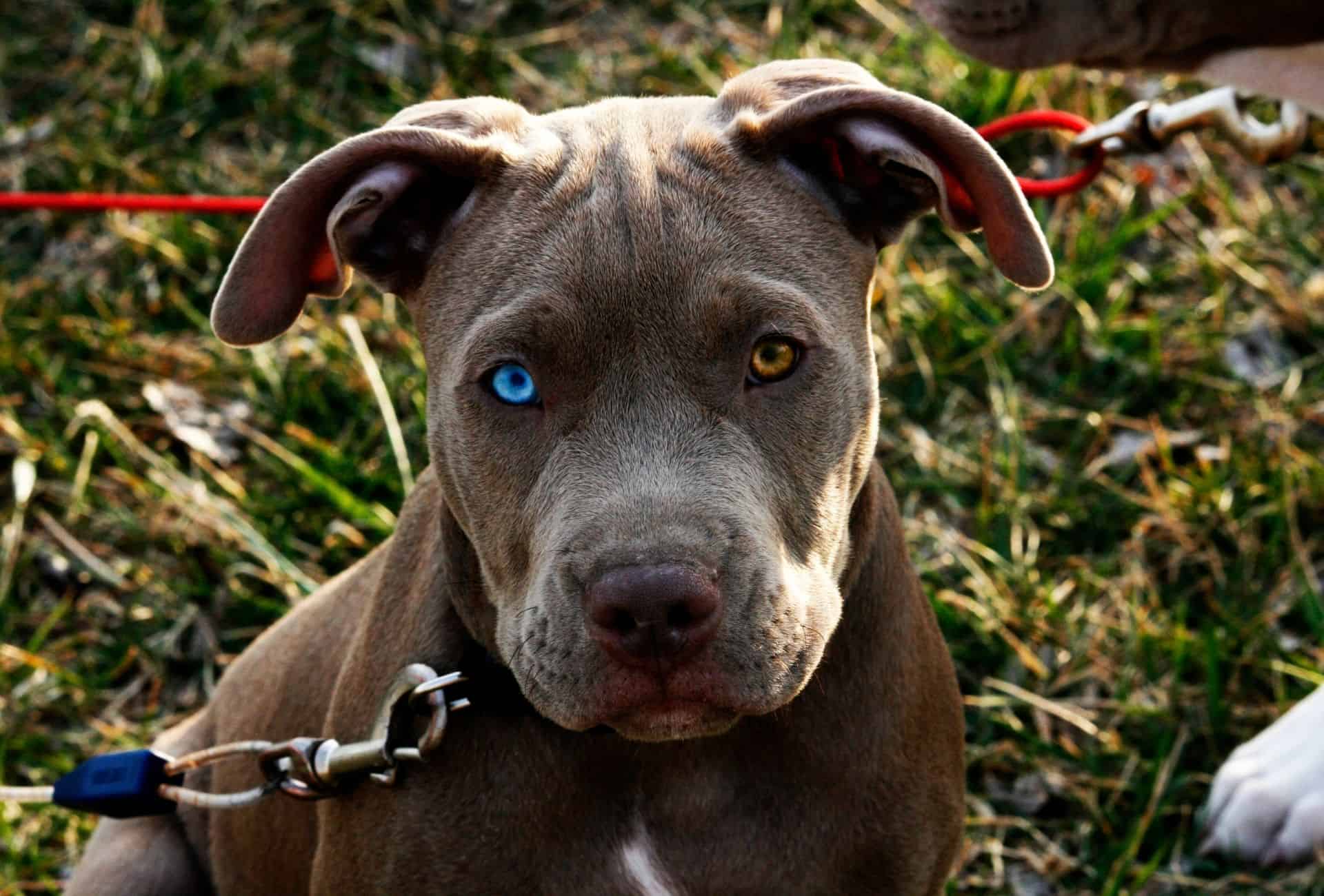 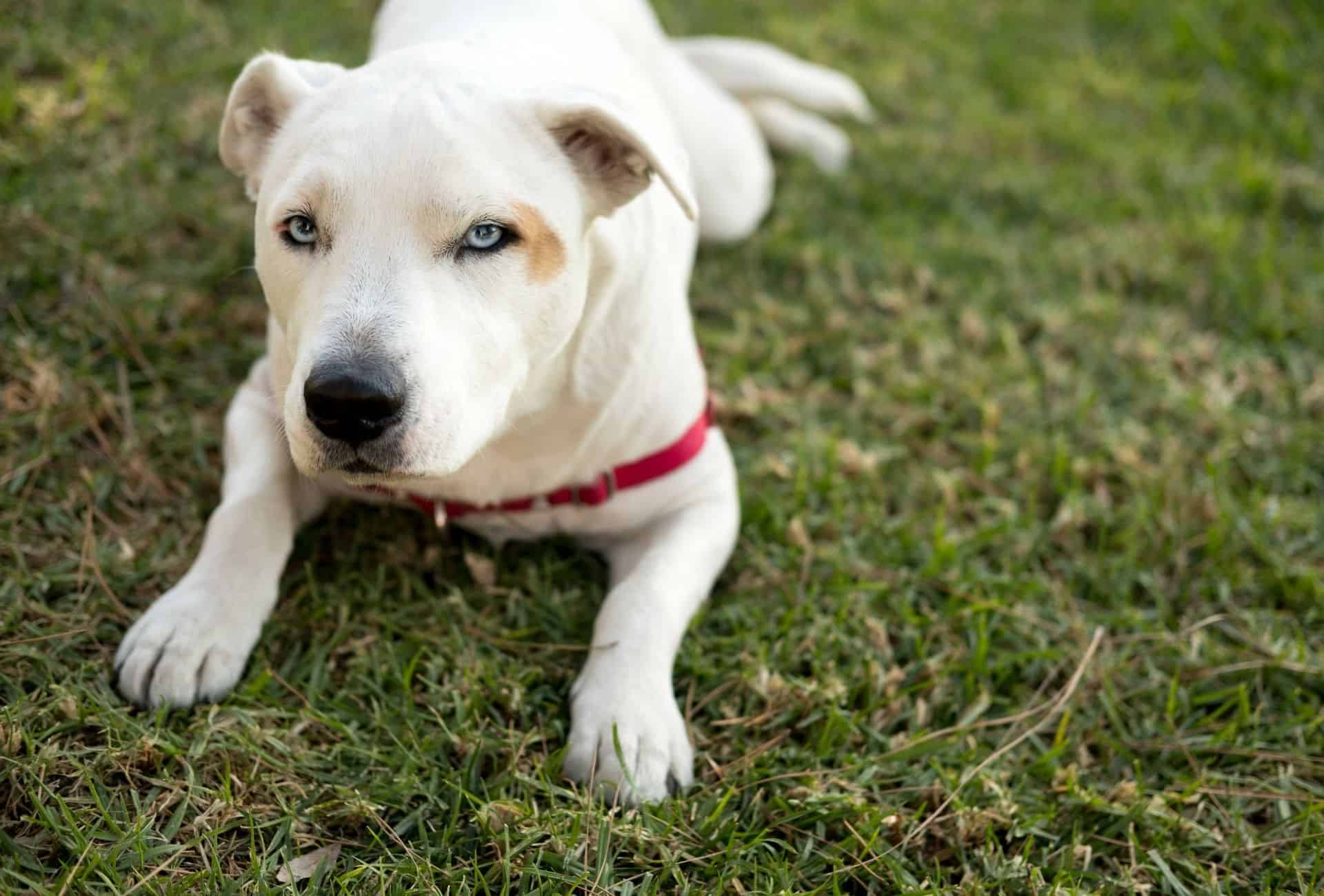 Why Do Blue Eyes Vanish in Puppies?

As mentioned, the vast majority of puppies are born with blue eyes, which gradually turn darker as they progress in puppyhood.

But how is this possible? While dogs who carry the Merle gene will sometimes retain low melanin levels that will not allow their eye color to deepen, all puppies are born with low levels of melanin.

In fact, melanin production only begins a few weeks after birth. While some puppies still manage to be born with pigmented fur colors, others fur won’t begin to darken until they get older.

It won’t be until your puppy reaches about four months of age that you’ll truly know what their adult eye and coat color will be, as these first few months are crucial to melanin development.

It has been said that the coat color can influence the eye color, as dogs with an extremely dark coat may have melanin levels that are so high that developing blue eyes would be impossible.

How rare is a Pitbull with blue eyes?

White Pitbulls are a rarer color than other Pitbulls, so you can expect to pay a little more for him. The average price of a puppy from a reputable breeder, is between $1,000 and $3,000.

What’s the rarest color for a Pitbull?

Blue-eyed Pitbull puppies are not rare and their eye color will most likely change over time. So don’t choose the one bright-eyed Pitbull in the litter just because of his appearance.