There is nothing dogs love more than chowing down on a fresh bone, and most aren’t picky about what they chew. As long as it smells like fresh meat, your dog is sure to be interested in any bone leftover from dinner.

If your dog gets its chops on a cooked bone such as a ham bone, it can potentially splinter as they chew and cause life-threatening harm to their digestive tract. If you suspect that your dog has eaten ham bones, you should be ready to go to your vet at the first sign of distress.

Here, I’m going to go over the dangers of ham bones for your dog and how to tell when it’s time for a trip to the emergency room. [Pro tip: If there is ANY doubt call your Vet emergency line immediately]

Ham bones are best avoided, too, according to Schmid. “Any real bone can splinter and cause damage to a dog’s esophagus, stomach, or intestinal tract,” she says. “Ham bones are generally more brittle than other bones, like chicken, and can splinter more easily.”

Can you feed your dog other cooked bones?

Perforation of the gastrointestinal tract

When a dog breaks a cooked bone with its teeth, the bone breaks into tiny, razor-sharp fragments just like glass. As these fragments make their way through the gastrointestinal tract, they can puncture or perforate any organ causing internal bleeding, particularly in the intestines.

Since ham bones are so massive, they can break into thousands of fragments, further increasing the risk of perforation. And while most pieces can make their way out of the gastrointestinal tract, there’s a risk that some might make their way into the windpipe. If that happens, your dog’s breathing can get restricted, and they could suffocate.

Another hazard of consuming ham bones is intestinal obstruction. While chewing, most dogs accidentally swallow a big chunk of bone. This bone can often get stuck in the esophagus, stomach, or intestines creating a blockage.

Depending on the chunk’s size, the obstruction might be complete or partial and could also cause a perforation. It can also impair blood flow, causing permanent damage to the intestinal tract.

Peritonitis is the inflammation of the lining surrounding the abdominal cavity, which can happen when a foreign object punctures an organ in the abdomen area, such as the stomach or intestines leading to a bacterial infection in the peritoneum.

When a dog consumes a ham bone, the chances of bone fragments causing perforation in the abdomen are high. Most dogs don’t show symptoms of peritonitis and suddenly become ill. It is also worth noting that peritonitis requires immediate surgery, and even then, about 50-70% of dogs don’t make it through.

Breaking down a bone requires a lot of strength. During this whole situation, the fragments of the bone can cut the inside of your dog’s mouth while they’re aggressively chewing on it. Some splinters might even get lodged in their gums or tongue and pose a risk of infection.

While this isn’t usually life-threatening, the wounds can bleed and make things worse. You might even have to take your dog to a vet if the fragments slit open a significant portion of their mouth.

Like we mentioned, the 24 hours after your dog eats a ham bone are vital to their survival. During this time, a dog might exhibit very vague symptoms or some significant ones. In any case, you need to be extra alert and be ready to take your dog to the vet.

In this situation, the presence of just one symptom should be enough for you to rush to the veterinarian. Because a ham bone is significantly larger than normal bones, it multiplies the risk of injury.

Here are some symptoms that show that you need to get in touch with your vet right away:

Usually, the first symptom to appear after bone ingestion causes a problem is vomiting. Most dogs will naturally try to vomit out any chunk of bone that’s lodged in their stomach or can’t be digested.

Sometimes, the dog will be able to vomit out a few pieces of bone. But in other cases, they might keep on vomiting without expelling any bone fragments. There may be a larger piece of bone lodged in their system that they’retrying to get out.

In any case, you should take your dog to the vet as soon as you can if they start vomiting.

Intestinal perforation is a serious threat when a dog consumes a ham bone. If any of the fragments have caused intestinal bleeding, your dog may have very dark-colored stools.

A tarry or black stool is a clear-cut sign that your dog is bleeding somewhere along the intestinal tract, causing blood to mix with the stool, giving them a dark maroon-ish or black appearance.

Internal bleeding is usually accompanied by lethargy and loss of appetite, but we strongly advise you to go to a vet as soon as you spot even a hint of dark stools.

In the case of bone ingestion, lethargy is a clear indication of an infection. Since the bone fragments can puncture any part of your dog’s gastrointestinal tract, bacterial infection can occur quite easily, leading to lethargy.

Internal infections are almost always caused due to perforations in the case of bone ingestion. Since these infections are quite severe and life-threatening, you should probably head to a vet as soon as you can if your dog seems unusually lethargic.

Another major symptom that can indicate multiple problems is a lack of appetite. It could mean that a piece of bone lodged in their stomach, or it could mean that the bone fragments have lacerated their intestinal tracts.

Lack of appetite could also be due to injuries in the mouth or gums. While lack of appetite will take a couple of hours to appear, if you see that your dog is frantically drinking water, take them to a vet straight away as it could be due to intestinal obstruction.

When a bone obstructs the intestinal tract, it will prevent any feces from reaching the rectum. In this case, your dog will feel like defecating and might try, but won’t be able to do so.

If you notice that your dog is trying hard to defecate but isn’t excreting any feces, the chances are that a piece of bone has lodged inside their intestines and urgently needs removal.

Should I Give My Dog Ham Bones?

You should never give your dog cooked ham bones after dinner, even if they seem big and meaty enough to make a tempting treat. 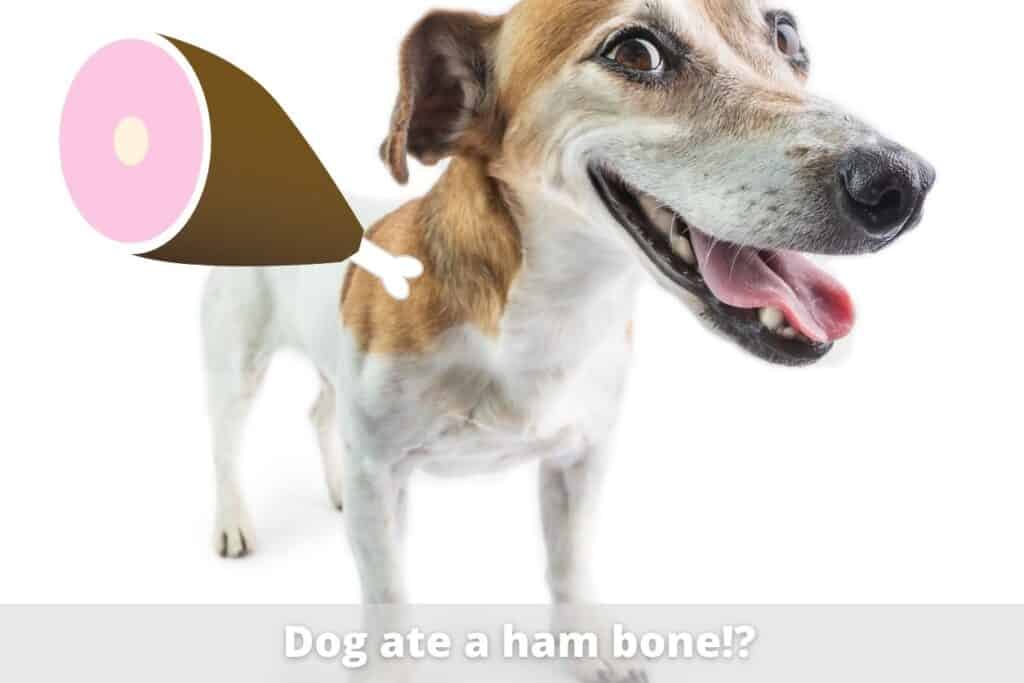 If your dog ingests a cooked ham bone, it can severely harm its digestive tract. Depending on a dog’s age, breed, and size, damage can end up being fatal. The more bone that a dog consumes, the more likely you are to see problems arise.

Raw ham bones, on the other hand, are safe for dogs. The bone doesn’t splinter in the same way that a cooked one would. However, keep in mind that too much rich and fatty ham can quickly lead to obesity issues. Raw bones may also carry bacteria that can lead to diarrhea and vomiting.

If your dog manages to sneak itself a cooked ham bone for dinner, you need to watch closely for signs of discomfort or distress. If you notice anything amiss with your dog after 24 hours of eating, it’s best to take an emergency trip to the vet.

An enthusiastic chewer can destroy a cooked ham bone in a matter of minutes, reducing it to countless razor-sharp bone splinters. Ingesting even just a small piece of bone shard can end up causing potentially life-threatening harm to your dog. Here, I will go over the most common health concerns for dogs who have eaten ham bones.

What kind of bones are safe for dogs?

Raw bones are considered safer than home-cooked because they don’t splinter as easily. Raw bones like chicken, turkey, lamb, beef, or even oxtail can be safer bone options for your pet. Unlike home-cooked bones which are drained of their nutrients, raw bones can be a natural source of calcium and phosphorus.

Cooked bones can splinter and cause severe internal damage to dogs. Ham bones from table scraps are absolutely off-limits, along with any other cooked bones. Dogs’ strong stomach acid helps break bones down, and kill potential bacteria.

What happens if a dog chews up and eats a ham bone?

If your dog ingests a cooked ham bone, it can severely harm its digestive tract. Depending on a dog’s age, breed, and size, damage can end up being fatal. The more bone that a dog consumes, the more likely you are to see problems arise.

Are ham bones from Petco safe for dogs?

In fact, cooked bones are some of the worst for dogs. The process of cooking them actually makes them extremely brittle, so as your dog chews them they are more likely to break and splinter.