Has Ol’ Roy Ever Been Recalled?

Yes. Independent testing in February 2018 by a TV news investigative team reportedly turned up traces of sodium pentobarbital — often used as a euthanasia drug — in samples of Gravy Train. Pentobarbital can be deadly when consumed by dogs or cats.

As a result of that investigation, the J.M. Smucker Company announced a recall of various flavors of Ol’ Roy, Gravy Train, Kibbles ’n Bits and Skippy canned dog foods. It wasn’t the first time pentobarbital had turned up alongside mentions of Ol’ Roy. More on that in a bit…

A recall in October 2008 was expanded a few weeks later. The manufacturer, Mars Petcare US, had been alerted to potential salmonella contamination of dry pet food products, which included certain packages of Ol’ Roy dry dog food produced in a Mars Petcare facility in Allentown, Pennsylvania.

The previous month, September 2008, had also seen a recall of Ol’ Roy dry dog food for the same reason: potential salmonella contamination. That recall involved many other brands of dog and cat foods, too — such as Pedigree, Special Kitty, PMI Nutrition, Red Flannel, Members Mark and Retriever — all of which had been produced at Mars Petcare’s manufacturing facility in Everson, Pennsylvania.

In June 2007, a single lot of 55 lb. bags of Ol’ Roy Complete Nutrition was recalled for the same reason: possible salmonella contamination. However, this dog food had been manufactured at Doane Pet Care’s Manassas, Virginia, plant. No other Ol’ Roy products were affected. The recalled food had been distributed to Walmart locations in Maryland, North Carolina, Ohio, Pennsylvania, Virginia and West Virginia.

In March 2007, as part of the larger Menu Foods/melamine recall that shocked the country, various sizes and varieties of Ol’ Roy dog foods and treats were recalled because of potential melamine contamination.

In June 2006, certain Ol’ Roy canned dog foods were recalled because of lining separation in the cans. According to Simmons Pet Food, the manufacturer, there was “random flaking” from the inside coating of the cans. Simmons said the incidence of flaking was extremely low, involving less than 0.1% of cans, but the company still felt it was “in the best interest of our customers to voluntarily recover this product from the marketplace.”

Finally, there was a large recall of Ol’ Roy in November 1998, following reports of sickness in pets and the deaths of “around 25 dogs.” The food was thought to be contaminated with aflatoxin, a toxic byproduct of a mold that attacks corn under certain temperature and moisture conditions. Drought, insect damage to crops, and improper storage and handling can all increase the risk of contamination.

In all, nearly 1.4 million bags of dog food were recalled that had been distributed to Texas and Louisiana. Doane Pet Care incurred $3 million in expenses because of the recall.

“We sincerely apologize if any of the products we make contributed in any way to family pets dying,” said Douglass J. Cahill, Doane’s CEO at the time. He noted that “since the first hint of the problem” the company had initiated its own “around-the-clock investigation.”

In 2002, the U.S. Food and Drug Administration (FDA)’s Center for Veterinary Medicine (CVM) released the results of its investigation into the presence of pentobarbital in popular dog foods. This euthanasia drug was finding its way into dog food by way of euthanized, rendered cattle and horses.

“Rendered” means some of the meat ingredients were created from the process of byproducts and other materials being cooked together and then centrifuged. Rendered ingredients can include animal digest, animal fat, beef and bone meal, beef tallow, and meat and bone meal.

A previous study (by the University of Minnesota in 1995) had already demonstrated that pentobarbital survives the rendering process virtually intact. In other words, high-temperature cooking does not destroy it.

CVM scientists analyzed nonrepresentative samples of dozens of dog foods purchased from retail stores in 1998 and 2000. Brands that ended up testing positive for the presence of pentobarbital included Ol’ Roy, Dad’s, Purina Pro Plan, Nutro, Kibbles ’n Bits and Gravy Train. Yes, all of these brands were shown to contain some level of pentobarbital, a deadly drug.

According to the CVM, its researchers concluded, however, that “the low levels of exposure to pentobarbital that dogs might receive through pet food [was] unlikely to cause them any adverse health effects.” Also, the center stressed that there was “a complete absence” of dog or cat DNA in the samples — meaning that, contrary to decades-old, horrifying rumors and myths, no euthanized dogs or cats had been rendered into the pet food.

The lab results released upon completion of the CVM’s investigation in 2002 showed that, along with several other dog food brands, samples of Ol’ Roy tested positive for the presence of pentobarbital — but not in amounts thought to be harmful to dogs. Here are the varieties that tested positive:

Understand that these tests results from 2002 simply reflect “a snapshot in time,” as the CVM describes it. The investigation took place many years ago, and the pet food formulations have most certainly changed since then. Therefore, “the data cannot be used to draw inferences about dog food being produced and sold in the U.S. today,” the CVM says.

Cause: Potential for salmonella. Announcement: Company announcement dated Nov. 25, 2008 (archived here); expanded from earlier FDA report dated Oct. 27, 2008. What was recalled: The following Ol’ Roy dry dog foods with “best by” dates between Aug. 11 and Oct. 3, 2009 and produced at Allentown, Pennsylvania (denoted by “50” as the first 2 digits in the line of coding directly under the best by date):

Note: The above is not an all-inclusive list. We believe there were a number of other Ol’ Roy dog food cans/pouches that were part of the recall, but unfortunately the available information was unclear to our research team. 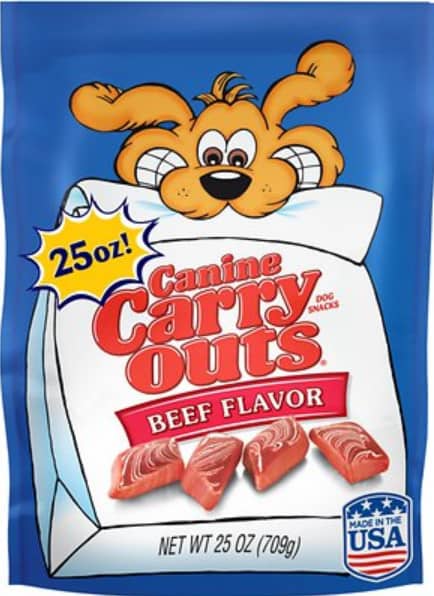 Why this dog treat is a bad choice:

It is definitely positive that the primary ingredient is chicken. However, this is where the merits of this product end.

Although corn syrup is not so harmful, it can be assumed as a secondary ingredient that there is a lot of it in this recipe. Too much corn syrup can lead to obesity, dental problems, and other diseases.

The already mentioned harmful BHA is also included in the ingredients as a preservative. It is a known carcinogen and should be avoided.

This treat also contains dyes such as titanium dioxide, Red 40 Lake, and iron oxide. Do not buy this product for your dog.

A suitable alternative for this bad dog treat:

Is Ol’ Roy Food Good For Dogs? Yes, Ol’ Roy Dog Food is good, especially for owners on a budget. Ol’ Roy is a grain-inclusive dog food that uses meat and bone meal or poultry by-product meal as the primary protein source.

What treats should dogs avoid?