When you live with a dog who pants and paces all the time, or a cat who lets out an ear-splitting yowl just as you are about to fall asleep, you might be tempted to find a quick fix to your pet’s anxiety problem, like using a weighted blanket marketed to treat anxiety in people. But are they safe for pets?

Weighted blankets have been found to be useful in people with anxiety disorders. The heavier weight of the blanket may mimic the effect of being swaddled, which some people find soothing. The underlying theory behind the weighted blanket phenomenon is called sensory integration. The deep and consistent pressure of the weighted blanket may help lower the body’s physiologic level of arousal and stress. When your body feels calmer, your brain follows suit.

Are Weighted Blankets Safe For Pets? You can use a weighted blanket with your pet, but if you have a small-to-mid-sized dog or a cat be careful not to let your fur baby bury itself under the blanket alone or unsupervised. It could be too much weight for them to absorb on their own.

Are Weighted Blankets Safe for Dogs and Cats to Sleep Under?

Though not that heavy for us humans, our weighted blankets can feel like a Goliath weight on top of our tiny fur friends. The biggest issue that occurs when a cat or dog sleeps under one is that it could end up being too heavy for them to easily get up or move around.

“Some dogs may panic underneath the blanket and this can cause a heightened sense of stress,” warns Dr. Tori Countner, DVM, founder of Balanced Pet Vet in San Diego, California. “Additionally, in cats, small dogs, older dogs or dogs with underlying respiratory conditions, the weighted blanket may be too heavy and can cause respiratory distress.”

Similar to the weighted blanket recommendation for us humans, any blanket or weighted product your pet sleeps beneath should be less than 10 percent of their body weight. So, for example, a 10-pound cat shouldn’t be under more than one pound, and a 20-pound pup should only curl up under a blanket that’s two pounds or less.

So, your 18-pound weighted blanket? That might not be the best bedding for your kitten or petite pup!

Another thing about human weighted blankets is that most are made with tiny beads to give them their heft. This could pose a choking risk to pets.

“If your dog is a chewer, or tends to chew and destroy things when anxious, they could easily swallow the beads,” says Dr. Countner. “Ingestion of the beads or part of the blanket can become a medical emergency due to blockage in the GI tract, so be wary.”

You don’t have to get rid of your weighted blanket if you have a cat or dog, but do be mindful about the way you use it. If your pet sleeps in bed with you, make sure they’re sleeping on top of the weighted blanket and not underneath it. And when you’re not using the blanket, keep it out of your pet’s reach to prevent chewing (especially if it’s beaded).

As any conscientious pup parent knows, dogs sometimes grapple with anxiety for a number of reasons: Certain sounds, trips to the vet, or meeting new humans can all result in a nervous fur baby. In recent months, weighted blankets for humans have become an anxiety-busting trend. The blankets, which are typically sold for $100 to $300, apply pressure to your body in ways that are scientifically proven to alleviate anxiety. Now, similar blankets are available for anxious pups, but are weighted blankets safe for dogs?

If you do decide to try a weighted blanket for dogs, the trainers and behaviorists at Smart Dog Owners suggest that they can be helpful for anxiety and PTSD, and some vets may use them as part of your pup’s treatment protocol. Smart Dog Owners notes that the blankets might be a soothing aid for emergency situations, or if your nervous dog is around a new person for the first time where a hug or touch wouldn’t be welcome. If the blanket is the right size, and isn’t too heavy for your pup, they should be able to move freely with it on, or shake it off when they’ve had enough, Smart Dog Owners says. The best weighted blanket for your dog is one that weighs no more than 10 percent of their body weight, just like those for humans. If your pup weighs 40 pounds, for instance, pick a blanket that weighs four pounds or less.

For larger animals, there are still some potential safety concerns. If your weighted blanket is designed for humans, it might put too much pressure on your dog’s chest. Also, since gravity blankets are typically filled with weighted beads, extra care should be taken if your pup has a tendency to chew. Eating weighted blanket parts can potentially pose some serious risks to your dog’s health — and no one wants a trip to the doggie ER.

If you’re dog seems uncomfortable with a gravity blanket, skip it and try something else, says Smart Dog Owners. Weighted Thunder Shirts or anxiety vests might work better for nervous dogs who don’t like weighted blankets. “[Thunder Shirts] also produce gentle pressure on your pet’s body to help reduce stress and anxiety by the same principles as a weighted blanket, but without the risks,” notes Dr. Fox. The Thunder Shirt is fitted to your pet’s body, which allows them to move freely, and studies have also proven its efficacy. Regardless of what you choose, makes sure to monitor your pet closely and consult with your veterinarian.”

Weighted blankets have been shown to help calm frayed nerves in some humans by simulating a ‘swaddling’ effect, LiveScience says. “The underlying theory behind the weighted blanket phenomenon is called sensory integration. The deep and consistent pressure of the weighted blanket may help lower the body’s … level of arousal and stress. When your body feels calmer, your brain follows suit,” writes PetMD. While the blankets might produce a similar, soothing effect in anxious dogs, there may be some safety concerns to consider before using weighted blankets for pets.

The concerns with pets and weighted blankets

Weighted blankets typically weigh between 10 and 30 pounds. While an adult human, who may be at least 110 pounds, can sleep with a weighted blanket and be just fine, âa pet that climbs underneath one of these blankets might not be able to get out because the weight of the blanket is too much for themâ.

What if you have a smaller dog like a Chihuahua with a body weight of only 5 pounds, or a cat that weighs 10 pounds? They would not be able to get out from under a heavy weighted blanket. If youre not there, they could become trapped.

âAdditionally, a weighted blanket may put too much pressure on your pets chestâ. The weight of it could have the opposite effect and cause your dog or cat to panic because they may have trouble breathing. If your dog or cat has asthma or a breathing issue, then the weight of the blanket is going to be dangerous for them. 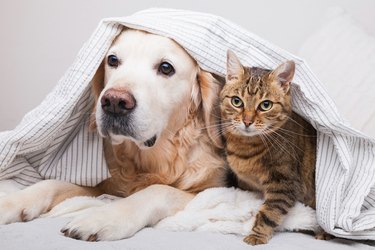 Another concern is that Gravity Blankets, a brand of weighted blankets, are made with weighted beads, and if your dog or cat bites the blanket and ingests the beads, you could have an emergency situation on your hands.

Some companies make weighted blankets specifically for pets, such as these found on Amazon. These products generally weigh in at between three and eight pounds and are designed for medium to large dog breeds. Its vital to make sure that these are appropriate in weight for your pets size and that tiny dogs in the household dont have access to them as they could be too heavy.

A lightweight faux fur snuggle blanket â such as The Dogs Blanket â emulates cuddling with a littermate or mother is one soothing option.

Is it OK to put weighted blanket on dog?

The safety risks for anxiety blankets are especially high for pets who already have difficulty breathing due to asthma, or a flatter-faced animal like a Bulldog or a Persian cat. In addition, if your pet has a skin condition, the constant pressure of a weighted blanket on their skin may be very irritating to them.

How heavy should a weighted blanket be for a dog?

The best weighted blanket for your dog is one that weighs no more than 10 percent of their body weight, just like those for humans. If your pup weighs 40 pounds, for instance, pick a blanket that weighs four pounds or less.

Finally, a weighted blanket is a completely natural solution to your dog’s anxiety. While there are anti-anxiety medications for dogs, they could make your pet lethargic or constipated.