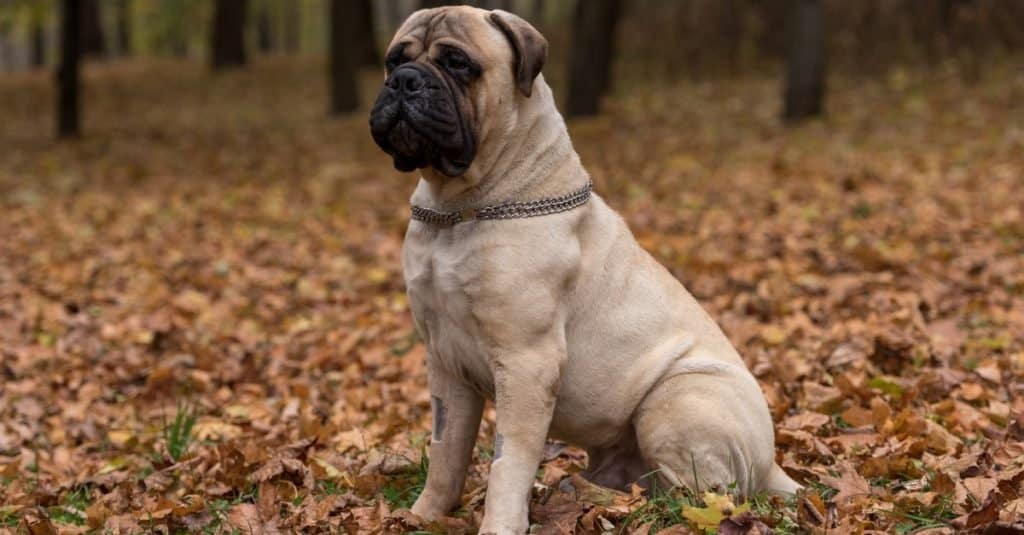 Bullmastiffs dogs should weigh between 110 and 130 pounds while bitches should weigh between 100 and 120 pounds. This breed was developed in England to ward off poachers on large country estates. This breed has an inherited instinct to knock strangers to the ground and pin them there until told to release. Therefore, early socialization is a must. 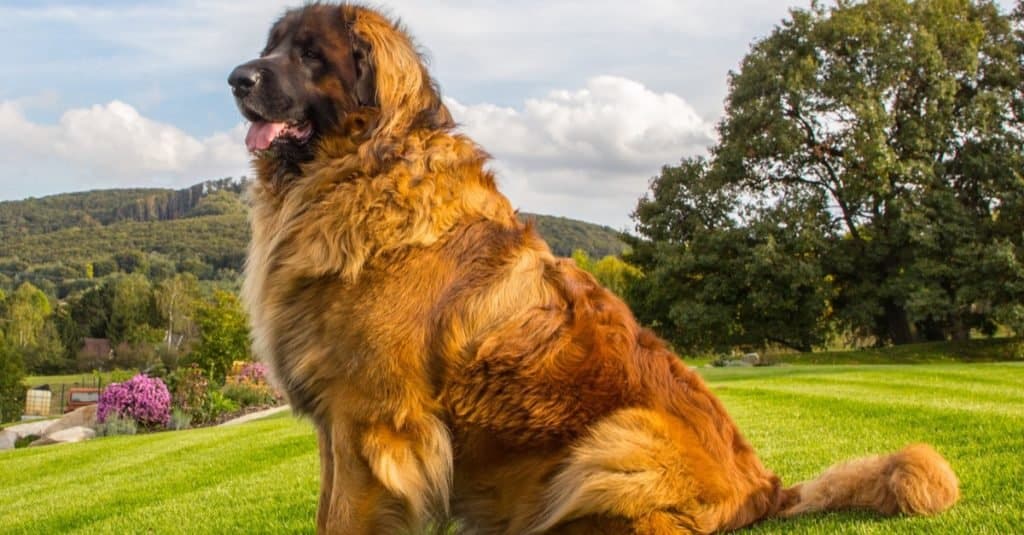 According to the American Kennel Club, male Leonbergers should weigh between 110 and 170 pounds while females should weigh between 90 and 140 pounds. Most stand about 30 inches tall at the shoulder. This breed has a unique lion-like mane around its neck and chest. Water rescue teams often use them because of their water-resistant coat. They also are used to herd animals and as watchdogs because of their size.

What is the largest dog breed in the world?

The largest dog breed in the world is an English Mastiff – in both height and weight! English Mastiffs standing between 27-35 inches tall and weighing around 200-230 pounds, on average.

If youve got room in your home and on your sofa, a giant dog breed can be the perfect match for you. Keep reading for our top 10 big dog breeds.

As we said previously, standing between 27-35 inches tall and weighing around 200-230 pounds, the English Mastiff is among the biggest dog breeds alive today – in both height and weight. Known throughout history for its fearsome beginnings, this breed is descended from ancient war dogs and now warms sofas around the world and makes a loving family member. When theyre not snuggled up with their favourite humans, this giant dog breed is also used for security, police and military work thanks to their high intelligence.

Like the English Mastiff, the Irish Wolfhound also stems from formidable roots. Previously used for wolf hunting (hence the name), this giant dog breed was used in wars to drag men off of horses and chariots!

As you can expect, Irish Wolfhounds are very strong and they can be up to 32 inches tall, yet theyre actually big softies at heart. With a shaggy appearance and gentle eyes, this big dog breed is great with children and other dogs, but theyre quite high energy so youll need to ensure they get plenty of exercise!

Many often wonder about the reason behind the name of the Saint Bernard and its usually thought to be attributed to their angelic temperaments, but did you know that they were actually bred by a Swiss monastery? Their large size (usually between 28-30 inches), meant they were perfect for protecting the sacred land. However, it was soon discovered that they made incredible search and rescue dogs in the Swiss Alps, and their kind face and soft eyes meant they were a very welcome sight to lost travellers. To this day, theyre still used in search and rescue operations throughout the world and are now one of most loved big dog breeds, thanks to their loving and docile temperament.

If youve heard of this giant dog breed, its probably due to their love of swimming! Known for being excellent lifeguards and fantastic at water sports, the Newfoundland even has webbed feet to give them an edge in the water. Usually standing between 27-29 inches tall, theyre highly intelligent dogs and their lifeguard history is so deeply ingrained that theyre known to try and save their family members if they spot them swimming. Newfoundlands have incredibly loving natures and their big and fluffy looks make them ideal for snuggling up with.

Also referred to as a French Mastiff, this big dog breed is usually 24-26 inches tall and has an unusual wrinkled appearance. Considered to be a descendent of the ancient livestock guardian breed Molossus, the Dogue de Bordeaux has had many different uses over the years. From hunting large game on French estates in the 12th century, to cattle driving and even being a fearsome war dog, this giant dog breed has been there and done it all.

Did you know? If youre considering getting a Dogue de Bordeaux, its worth knowing that due to their excessive skin folds theyre at high risk for dermatitis, so do plenty of research on the breed.

A cross between a Saint Bernard, a Newfoundland and a Pyrenean Mountain Dog, the Leonberger looks like a big adorable fluffball. Commonly around the 30-inch mark, this big dog breed is strong and smart and is most commonly used for tracking and herding. Theyre best suited to more seasoned owners with a knowledge of training, as without obedience training they can become destructive. When well trained and socialised, the Leonberger makes an excellent family dog, but they can be sensitive so theyre not always suited to very young children.

According to the American Kennel Club, the Anatolian Shepherd is an ancient Turkish breed that dates back to around 2000 B.C.! Originally bred to protect flocks and property, this giant dog breed is actually still used for that purpose today in its homeland of Turkey. Standing at about 32 inches tall, the Anatolian Shepherd has quite a long lifespan when compared to other big dog breeds with an average of 13 to 15 years.

The Neapolitan Mastiff is an intelligent and quiet giant dog breed that was originally bred for guarding homes in Southern Italy. They have an unusual appearance with heavy, loose skin, designed to protect them in case of an attack. These oversized lapdogs are usually around 31 inches tall at the shoulder, and thrive off human contact, so theyre best suited to family life. Youll have to be able to handle a lot of drool though as their huge, droopy jowls mean that theyre prone to slobbering!

Created as a result of a cross between the English Mastiff and the Irish Wolfhound, it should come as no surprise that the Great Dane is among the tallest of dogs.

Standing at around 30-34 inches tall, this big dog breed was bred by German nobles for the purpose of hunting large game such as boars and protecting their estates. In todays world, Great Danes are known for their kind and playful natures and they make excellent family dogs.

The Caucasian Shepherd is an Eastern-European dog breed bred for protecting and herding livestock. This big dog breed can be over 30 inches at the shoulder and its large size meant that it was great at protecting flocks and herds against predators in the Caucasus Mountain region. Best suited to experienced owners due to their stubborn nature, they can also be quite territorial of their home and dislike other dogs or strangers near their property. However, with proper training and socialisation, the Caucasian Shepherd can make a kind and friendly family dog.

(CNN) A Great Dane has been crowned the world’s tallest living dog by Guinness World Records. Two-year old Zeus from Bedford, Texas stands at a whopping 1.046 meters (3 feet, 5.18 inches), making him the tallest dog in the world.

What is the top 10 biggest dog breed?

Meet ‘Giant George‘ the 7ft-long blue great dane who could be the world’s tallest dog. Standing at nearly 43 inches tall from paw to shoulder and weighing a staggering 245lbs, George is a gentle giant who tucks away 110lbs of food a month.