The American Bullies which originated in the 1980s and were originally bred as companion or family dogs, come in different sizes.

But in this blog, we will discuss the Standard Blue American Bully, which is a medium breed like any other American Bully out there.

Since there is nothing much difference between American Bully and the blue one, it’s reasonable to say that Blue American Bully can also be referred to by the nicknames above. We can call the latter the Blue Bully.

Known for being outgoing, confident, gentle, loving, and protective, the Blue Bully can be an excellent buddy with an expected life span of 10 to 13 years.

The Blue Bullies come in different blue shades, particularly: solid color blue, blue tricolor, blue brindle, and blue merle. They have an estimated biting force of 305 PSI. They also do not bark excessively.

Blue Bullies have robust, compact, and muscular bodies. They have big wide heads, broad shoulders apart from each other, and strong legs. They also have averagely dense coats of single-layered.

Nutritious food with high quality protein and other nutrients will help them maintain their health. To keep them happy, give them 4 cups of food per day. This will be enough to keep them satisfied.

What Is An American Blue Bully? 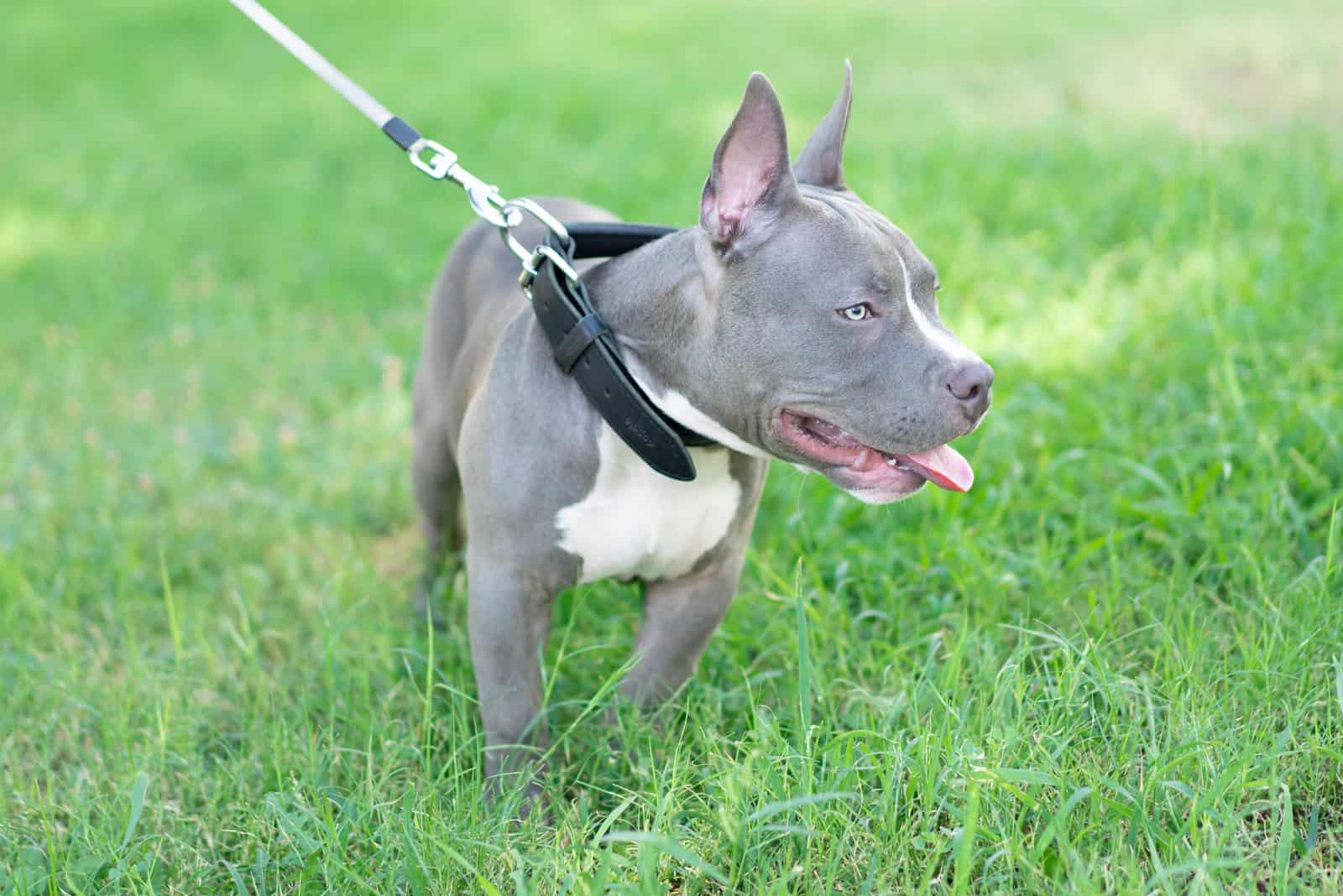 The first thing to say is that it isn’t blue! Sorry if this is a disappointment, but the word blue is a tad misleading. Anyone familiar with the names given to dog coat colors will know that they can be a bit overblown.

Rather than resembling a Smurf on all fours, these dogs will have a beautiful short coat in a shade of silver-gray. This color is produced because the parent dogs both passed on a recessive gene to the pup that gives it a diluted black coat.

The blue American Bully is pretty popular, which is understandable, although not everyone is happy about it. There is a school of thought that suggests blue dogs are more prone to skin problems, such as color dilution alopecia (CDA). While this may be true for some breeds, the American Bulldog is not usually included in this group.

The true cause of CDA isn’t known or understood, but the condition is inherited and commonly affects dogs with fawn or blue coats that have been diluted from black, tan, red, or brown.

CDA causes hair loss, recurring skin infections, and dry, itchy skin. There is no cure as it’s an inherited condition. Although it can be managed, this is usually a costly process.

Because of this, some people recommend avoiding blue dogs. However, this ignores the fact that CDA is found in many other diluted colors, as well as that there are no reported cases of CDA in the Weimaraner, an all-blue breed! Also, only 8% of Dobermans are born with a dilute color, but between 50–80% of these have CDA. The fact is, even if two Blue American Bullies are bred, it doesn’t automatically mean that they will have CDA!

Some people go further and suggest that there are other health risks if a dog has a blue coat, but evidence for this is lacking. It also conveniently forgets that decades of selective breeding has resulted in countless health conditions purely to preserve the breed the way it is.

As with any dog breed, the main thing is to approach a reputable breeder who doesn’t breed purely for color. Ethical breeders strive to produce the healthiest dogs and won’t use color or size as a marketing gimmick.

What Is a Blue American Bully? 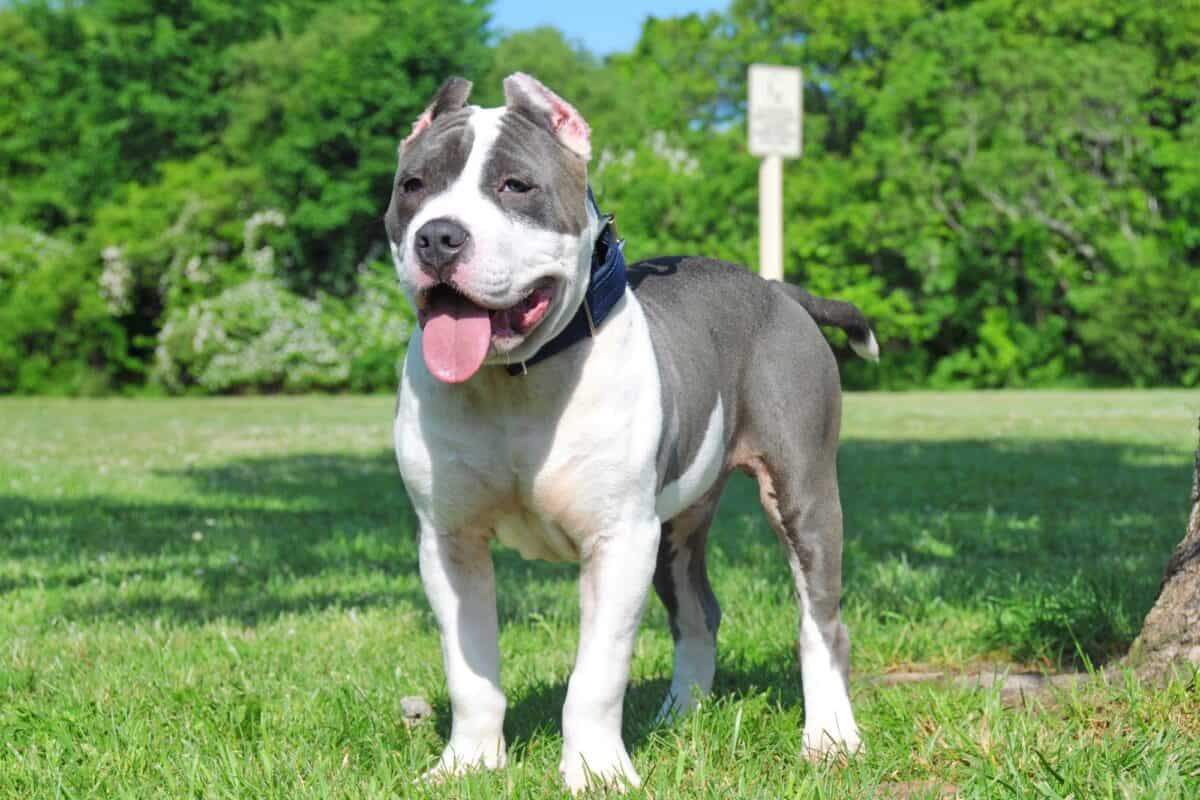 The blue American Bully is just one of the many color variations of the American Bully breed that we know. They may either come in solid blue, tricolor, merle, or brindle. Generally, their blue pigmentation is said to be caused by a dilution gene.

Their loyal and gentle demeanor towards their family and children makes them perfect family companions.

They are also well recognized by the United Kennel Club as a standard color of the breed. Thus, they are allowed to join dog shows and agility events aside from being your family pet.

Solid blue, blue merle, and blue brindle American Bullies are not rare, even though they seem to be. They are some of the most common colors for Bullies, along with black and fawn. However, the same cannot be said for the blue tricolor American Bully.

Tricolor Bullies, in general, are quite rare and uncommon. Hence, a blue tricolor American Bully would be challenging to acquire.

They are rare because they weren’t bred and produced for several generations due to the misconception that tricolor Bullies are not purebred.

The avoidance of breeding blue tricolor American Bullies has led to the thinning of the tricolor gene pool. Hence, it is very seldom for a litter to have a tricolor puppy.

Are Blue American Bullies good with other dogs?

Yes, they are protective of their pack and even serve as a leader there, yet they are quite hesitant when it comes to new dogs. They may even show aggression to those of the same sex.

However, this is not likely to cause conflict when they are properly socialized at an early age. Surely they will get along as time passes by.

Is a blue brindle bully rare?

Blue brindle is less common as it’s produced by a recessive gene (both parents have to pass the gene on to the pup for it to have any chance of affecting the coat color), but it isn’t exactly rare. A blue brindle American Bully will look very distinctive!

What is this? Purchasing an American Bully puppy is not cheap. These dogs can cost between $2000 and $5000 if you find purebred puppies from a reputable breeder. There are also quite a few American Bully crossbreeds for sale, and these will set you back between $500 and $800.