The coat pattern of tri-color Pitbulls is a fairly recent one so no kennel club at the moment lists them as one of the breeds that can participate in shows.

This is also the case for the American Pitbull Terrier and the American Bully which are recognized by United Kennel Club. The tri-color combinations aren’t listed on their color standards. 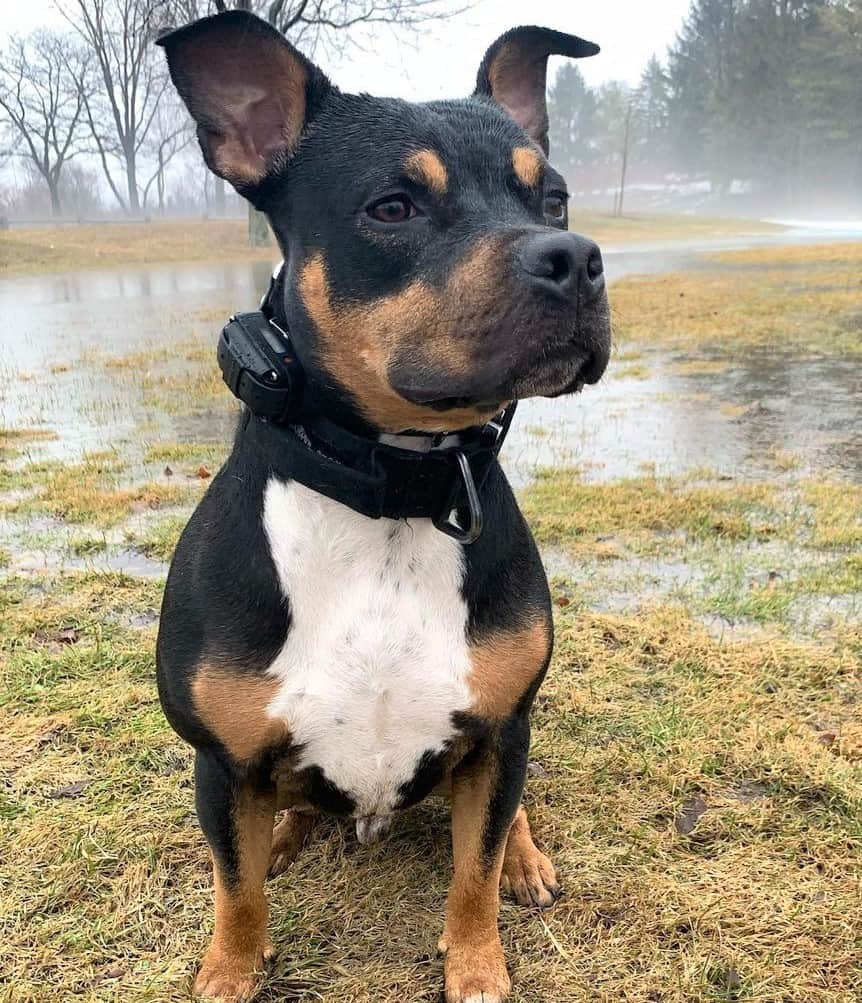 Given the fact that they are a new Pitbull color variety and that there’s difficulty in breeding them successfully without genetic defects, tri-color Pitbulls are quite rare.

As a pet owner, it is highly advised to refrain from breeding two tri-color Pitbulls on your own as the risk of genetic disorder is high.

Tri-color coats are caused by a recessive gene and it would take two parents who are carrying this to produce a tri-color litter. This gene increases the chances of genetic problems, so be sure to work with a veterinarian when it comes to breeding them.

Among tri Pitbulls, there are coat patterns that are less common than the others. The patchy black, white, brown pattern is very common. One of the less common ones is the merle blue tri-color ones as well as lilac tri-color Pitbulls.

How Much Does a Tri-Color Pitbull Cost? Are They More Expensive Than Other Varieties?

Tri-color Pitbulls do not cost more compared with other varieties. Most tri-color Pitbull puppies are priced at $750 on average, with no difference regarding coat colors and patterns.

Some breeders may sell them at a higher price but the pricing is affected by other factors such as the puppies’ generation, papers, and shots.

There are two types of Pitbulls based on the color of the dog’s nose:

A standard blue fawn Pitbull belongs to the red nose Pitbull type. This means that their nose is a pale red or pinkish color.

These dogs usually look the same as blue nose Pitbulls, except for their nose color. In fact, the genes that cause the red nose also affect the color of the eye rims, lips, and paw pads.

The combination of a red nose and blue eyes makes these dogs a rather unique sight. In fact, many would consider them the most beautiful Pitbull color of them all.

Still, it’s important to note that there is a slight difference in temperament in the red nose and blue nose Pitbulls – although it is barely worth mentioning since it all comes down to dog training and socialization.

Red nose Pitbulls are friendly yet fairly calm. They aren’t likely to jump on humans or try to invade your space. They know how to respect everyone’s privacy, although they wouldn’t mind spending an entire day with you.

Still, they can be a bit wary of strangers and alert, so they make great watchdogs and guard dogs. This isn’t to say they make bad family pets – quite the opposite. However, they are mostly bred for this purpose.

How much is a blue tri Pitbull worth?

What is this? A blue coat on its own isn’t very rare in the Pitbull breed. However, the unique blue fawn coat color is anything but common. Various kennel clubs recognize blue fawn Pitbulls, but this doesn’t mean the color isn’t rare.

How much is a blue fawn Pitbull puppy worth?

Tri color Pitbulls are fairly rare, but not as rare as merle or pure black dogs. They usually cost between $2,000 and $5,000. While they can come in various coat shades, unless some of these colors are extremely rare, their price won’t be affected.