These are large dogs – who need a lot of space! 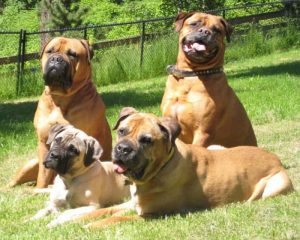 Given their size, I would not recommend getting this mixed breed if you live in a flat, as they will need ample room to move around. Ideally, you should have a house and a garden for her to run and play in.

Furthermore, I do not advise getting a Pitbull Mastiff if you have a very small child.

While these dogs can be good with children providing they are trained correctly, they could easily knock down little ones and injure them. This is particularly true if you get her as a puppy – an excitable Pitbull Mastiff and a small child don’t mix!

A Pitbull Mastiff can fit in well with a family that has older children (10+), as long as they are always supervised when together.

The name of the Bullmastiff tells you the whole story. He is a combination of the Bulldog and Mastiff. The latter gets the lion’s share of the mix at 60 percent.

The Bull Terrier entered the ranks of the AKC’s recognized breeds in 1885, just seven years after the first round of dogs. The Bullmastiff came much later in 1934. The Lakeland Terrier and Brittany Spaniel joined him that year.

How big will a pitbull mastiff mix get?

How do you train a pitbull mastiff mix?

The Pitbull Mastiff Mix may look tough, but he’s one of the sweetest, gentlest dogs you can get for your family. Also called a Pit Mastiff or an American Masti-Bull, this crossbreed is an excellent canine companion. He’s protective and loyal, and his intelligence makes him easy to train.