We are used to media portraying bones as dogs’ favorite food, but the reality is quite far from fiction.

Bones can be dangerous treats for dogs and if your dog ate a ham bone, depending on the situation their life might be at risk.

In fact, there are some bones that are mostly safe to eat and others, like ham bones, that should never be fed to your companion.

What happens if a dog eats a ham bone?

Ham bones are considered to be good treats for dogs. Ham is a good source of fat and can be given occasionally in small amounts. However, feeding your pet ham regularly can make it obese. Cooked ham bones are not recommended for dogs. The bones can split into small fragments and damage the dog’s mouth, throat, and intestines.

Raw ham bones can be given as a treat after meals. However, they should be large enough so that the dog doesn’t swallow it. Never let your pet out of your sight while it’s chewing the bone. Vets recommend giving artificial bones to dogs rather than real ones.

Tips To Help Your Dog Survive Eating A Ham Bone

While the consumption of a full ham bone is a dire situation, some dogs do safely make out of it without any serious damage to their health.

Here are a few instructions and precautionary measures you can take to help increase your dog’s fighting chances if they consume a ham bone:

You probably must have heard of this old wives’ tale before, but it does work. Feeding your dog bread right after eating the ham bone can help coat the bone fragments and prevent them from doing severe damage to their intestinal tract.

Pumpkin has several health benefits to dogs, but perhaps the most notable one is improving digestive health. Pumpkin soothes the stomach, adds bulk to the stools so they can pass through easily, and lowers the large intestines’ pH.

This is especially helpful in this situation as dogs can suffer from diarrhea and stomach upsets after eating so much bone. 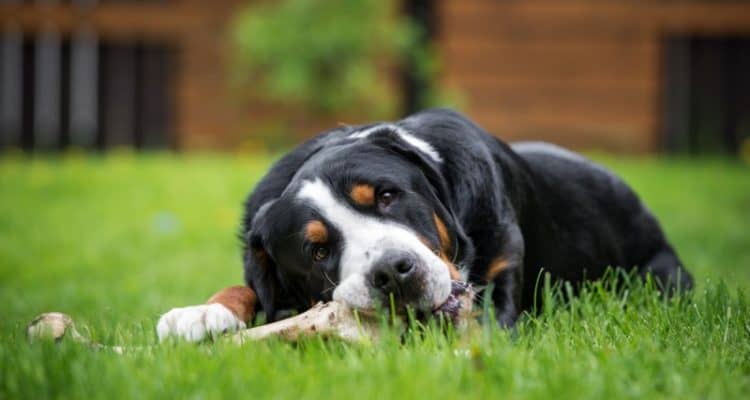 Can a ham bone make a dog sick?

In most cases, a ham bone will almost certainly make your dog sick. The chances of it simply passing through with no damage whatsoever are rare. That’s part of why ham bones are seen as severe complications! Some of the sickness-related problems can include:

This could be an infection in their mouth, throat, abdomen, intestines, etc. Anywhere the bone goes, it can cause cuts, which can cause inflammation, and then they can get infected. Since they are internal, this can be hard to spot and can lead to a life-threatening condition called peritonitis. We’ll get more into that later.

The ham bone can easily cause indigestion as your dog struggles to break it down, and this can lead to all sorts of problems like lack of appetite, diarrhea, flatulence, and just general discomfort.

If there is an obstruction from the bone getting jammed in the stomach or intestines as it weaves its way through (even assuming it hasn’t splintered), that can lead to backup and a severe problem that will most likely need surgery to fix it.

What can happen if a dog eats a ham bone?

Ham bones are best avoided, too, according to Schmid. “Any real bone can splinter and cause damage to a dog’s esophagus, stomach, or intestinal tract,” she says. “Ham bones are generally more brittle than other bones, like chicken, and can splinter more easily.”

Can a ham bone dissolve in a dog’s stomach?