Skip to content
What happens if my dog ate an onion ring?

Can Onion Rings Cause Seizures In Dogs?

Yes, onion rings can cause seizures in dogs.

But dogs can also develop seizures from other causes. For instance, they can get it when they eat some toxins. And yes, the thiosulfate compound found in onions is among the list of toxins that can give dogs seizures.

So yes, when you notice that your dog has seizure issues, the finger doesn’t have to always point at the breeder – perhaps your dog ate onion rings or some other food containing toxins likely to trigger the condition.

How Long After Eating Onion Rings Will A Dog Get Sick?

How long after eating onion rings a dog will get sick will depend on the toxicity level. High levels of toxins in the body will make your dog sick faster. However, sickness usually manifests 24 hours from the time of ingestion.

After dogs eat onion rings, they usually won’t get sick immediately. It will take time before the toxin in onion rings wins the fight against the dog’s immune cells. That’s where the issue of quantity comes in. More toxins take less time to overpower the immune cells, so signs won’t take long to manifest. Symptoms are a sign that the toxin part is winning.

That’s because their bodies aren’t strong enough to fight back the toxins effectively. So yes, sometimes it will take minutes or a few hours before your dog becomes sick after eating onion rings.

Gastroenteritis is most of the time the first sign of sickness after dogs eat onion rings. It comes along with diarrhea and vomiting. With time, diarrhea and vomiting dehydrate the affected dog, which causes more complications. In other words, it’s more of a series of happenings.

The first sign is noticeable within 24 hours after ingesting onion rings. However, the sickness could take as long as a week before it manifests. That’s why you need to observe your dog closely for a week or so after they eat onion rings. 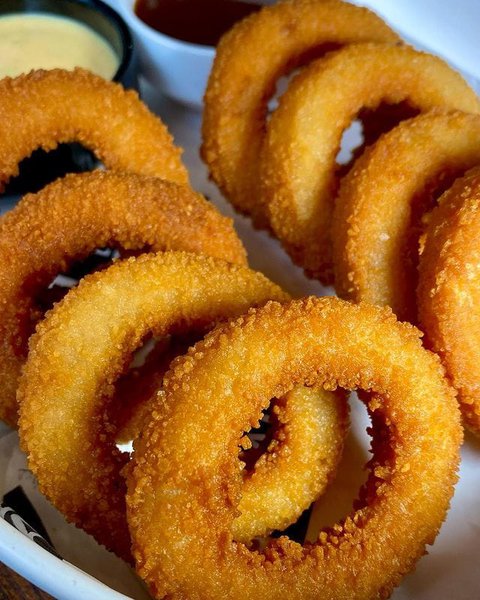 How Do I Know If My Dog Has Onion Poisoning?

You can know that your dog has onion poisoning when they exhibit signs of this kind of toxicity. When you notice any of the behavioral changes, contact a certified vet immediately. The vet will guide you to manage the condition and keep things from worsening.

Signs of onion poisoning in dogs include but are not limited to;

In the case of ingestion, you should notice at least one of these signs. But again, if your dog doesn’t exhibit any of the above, it doesn’t rule out poisoning. Perhaps the amount of onion rings the dog ate isn’t large enough to cause them issues.

Where you aren’t sure that your dog ate onion rings but have a few things that suggest possible ingestion, it’s again wise you chat with a qualified veterinarian. You don’t know what will come out of it, so it’s always best to play it safe.

How many onion rings is toxic to dogs?

It only takes 100 grams of onion (about the size of a medium onion) per 20 kilograms of a dog’s weight to cause toxic effects, which means that a 45-pound dog would only have to eat one medium-to-large onion to experience dangerous toxicity levels.

Will a small amount of onion hurt my dog?

Generally speaking, toxicity occurs when a dog ingests more than 0.5% of their body weight in onions at one time. To put it simply, even a small amount of onion, garlic, or other toxic allium food can poison a dog easily.

How long does it take for dog to show onion toxicity?

Clinical Symptoms of Onion and Garlic Poisoning in Pets

Clinical symptoms typically develop within 24 hours, but they can be delayed for up to 7 days after the food has been ingested.