On your most recent trip to the pet store, what kinds of chew toys did you come across? From squeaky stuffed animals to rawhide squares to rope toys, you have many options to choose from. You may purchase a variety of toys and let your dog show you the ones he prefers.

So, are rope toys safe for dogs? Well, if your dog tends to destroy his toys, he’s more likely to swallow a piece of it. It’s important to know that 95% of the time, the foreign objects your pet swallows pass without incident. You probably wouldn’t even know your pooch swallowed something he shouldn’t have. The other 5% of foreign objects that enter your dog’s system are a different story. These can cause serious, even life-threatening digestive problems.

This brings us to a discussion about rope toys. Thin strands of rope are very dangerous when swallowed. Categorized by vets as a “linear foreign body,” rope is just about the most dangerous object your dog can swallow. As one part of a long piece of rope toy remains stuck in the stomach, the other half enters the intestines, cinching like a drawstring on a pair of sweatpants as the digestive system attempts to pass the string through the body.

This causes the intestines to be drawn into a tight ball. As you can imagine, this is very painful for your dog. The tightening can do permanent damage to the intestines, sometimes even creating painful lacerations as the rope cuts into the intestine walls.

Even if your dog only pulls off small pieces of rope at a time, this type of toy can still be dangerous to his digestive system, slowly creating an obstruction like hairs collecting in a shower drain.

Are rope toys dangerous for dogs?

Why Does My Dog Eat String From Rope Toys?

A dog eats strings from rope toys out of boredom or even excitement. Furthermore, when teething, the gums naturally desire a respite from the ache and nibbling on soft, pliable material like a rope toy will help. But overall, dogs like to exercise their teeth, and chewing on things is one way to do that.

Sometimes, though, they may swallow the things they chew. Note that this may also be out of curiosity, and it can make puppies eat improper things like carpet padding. Your pet does not have flexible use of his fingers, and palm like you do, so his best bet is to use his teeth and paws to get a good feel. He gets this way when bored; if you haven’t played tug with him in a while, he may chew on the rope while reminiscing or trying to expend the energy.

Anxiety may also be the reason your dog has eaten string from a rope or any other improper material, for that matter. A significant sign of anxiety in dogs is destructive behavior, such as tearing apart his rope toy. Ultimately, these could be symptoms of a condition called pica in dogs. The consumption of inedible materials characterizes it.

My Dog Ate String From A Rope Toy – What Do I Do?

If your dog ate string from a rope toy, the first thing you’re going to want to do is to check to see if your pup has any more string in or around his mouth…

If he does, you’ll want to get a hold of the string and remove it so that he doesn’t eat anymore of it… 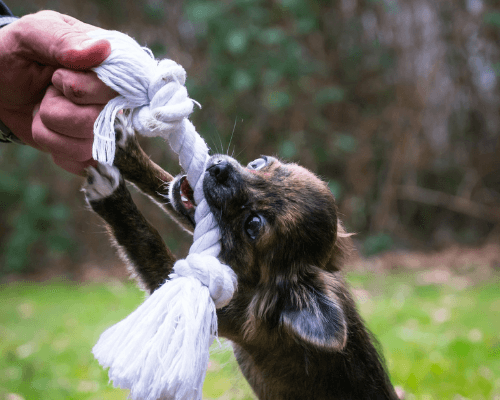 After that, you’ll want to contact a veterinarian because of the potential for intestinal blockages and long strings getting tangled in your dog’s stomach and intestines…

Be sure to observe your dog’s behavior so that you’ll be able to provide the vet with more information… Ask yourself questions such as:

The vet may recommend a visit to the animal hospital depending on the situation, and once there…

…a vet may examine your pup with a small endoscope that will allow them to see inside your dog’s stomach. If the vet finds any string, he or she may be able to remove it.

All in all, it’s best to be cautious in these types of situations, and speaking to a vet will help you determine the best course of action for your dog’s health.

Recently, I was presented with a young Schnauzer puppy named Lexi that had stopped eating, began vomiting, and was having pains in her abdomen. Her owners were not aware of anything she might have swallowed. X-rays did not reveal an obvious foreign body.

A “foreign body” is the term we use to describe anything other than food that your pet may have swallowed. It can be very complicated to determine whether a particular foreign body will make your pet sick. The most difficult cases of foreign body ingestion occur whenever the pet owner doesn’t know that their pet swallowed something.

Fortunately, Lexi recovered very well from surgery and is at home being a normal puppy once again.

Can a dog pass a rope toy?

Strands of rope that become detached from a rope toy and then swallowed are referred to as ‘linear foreign bodies’ by the veterinary profession; they are among the most devastating things a dog can swallow. Once the strand of rope gets into the small intestine, it is virtually impossible for it to pass naturally.

What do you do if your dog eats string?

You will need to take your dog to the vet immediately to have them sedated so the object can be removed safely. If you can see thread, string, or another form of cord hanging from the dog’s mouth, do not pull it or cut it. Doing so may cause injury to the throat or esophagus, among other sensitive structures.

How long does it take a dog to digest string?

It is possible for a dog to pass a foreign object in as little as 10 to 24 hours. This is only if it is small enough to pass through the digestive tract and doesn’t become stuck.

Is it bad for dogs to eat rope?

If you let your dog chew on a rope toy, never let them do so without observation, never leave it laying around, and always take it away if you see the dog pulling out and eating the strands. If they swallow these strands it can lead to a dangerous digestive obstruction that requires surgery and can be fatal.