Dogs don’t have hands, so their mouths are used quite a bit in their day-to-day lives. You’ve seen your dog consume some of the grossest things in existence, but they also use their mouths to explore their environment.

Dogs don’t have the most fine-tuned taste buds (which is why they eat almost anything), so they use their tongue in combination with their smell to explore their surroundings.

What does it mean, though, when your dog is happy and almost obsessively licking your couch and furniture?

Dogs are creatures of habit and changes in their routine can make your dog anxious. Repetitive licking releases endorphins and is a way for dogs to self-soothe. In many cases, licking the sofa is an occasional response to occasional stress, loneliness, or boredom. However, it can become a habit if not checked.

How do I stop my dog from licking the couch or sofa?

While there is a school of thought that aggression towards your dog lets them see you as the master in order to behave, fear and physical punishment are actually far more likely to cause your dog stress and anxiety than actually training them. 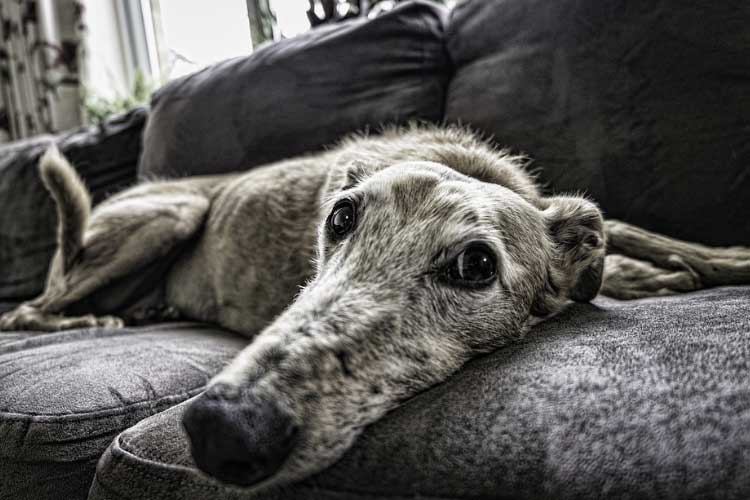 This can often do the opposite of what you intend, with their behavior getting worse because of their confusion or unhappiness. Instead, positive reinforcement training is a far better and more effective solution to training your dog out of negative behavior.

Positive reinforcement training is achieved by rewarding your dog for good behavior, rather than punishing them for bad ones. Using a clicker and treats allow them to learn that bad behavior does not get them rewarded, either through treats or praise, while good behavior does.

This can be used for many different issues, including chasing, barking, picking things up, stealing food, going to the toilet inside and even stopping them from licking your couch.

Another method that some dog owners use when their dog is licking their suede or microfiber couch is to use a spray with a taste that they don’t like.

The spray you can buy is a bitter lemon spray. It is supposed to taste super nasty to dogs, so might be worth giving a shot. I found a product on Amazon that has reasonably good reviews.

Why does my dog lick the couch all the time?

To stop your dog licking the couch or otherwise biting items and bits of furniture around the house, it is important that you first pin down the reason that your dog is licking your couch, cushions, sofa, or bed.

Why does my dog lick the couch?

Below are a number of common reasons why dogs do it and what would make them more likely to be the main reason.

Anxiety could be what has been causing it to do it. This would be more likely if it has started doing it after something happened that could make it anxious or if it does it more at a time where it is likely to be anxious. Examples could be if it does it more when a certain person is around, when you are about to leave home or when there are loud noises coming from outside.

It would help to try to limit reasons why it might be anxious by doing things such as exercising and feeding it before leaving it so that it is more likely to sleep while you are away.

When you sit on the couch, sweat and dead skin cells will gather on the couch which tastes salty to your dog. The reason why it licks the couch could be that it likes the way that it tastes. This would be more likely if it tends to lick the couch that you have been using yourself the most.

If it does seem to be doing it due to liking the taste, it could be a sign that there is something wrong with its diet. This would be more likely if it started doing it after a change in its diet.

The reason might be that it is due to an obsessive-compulsive disorder. This is where it has an irresistible urge to lick the couch so it keeps doing it. This would be more likely if it has been licking the couch constantly for a few weeks now. In this case, the best option would be to get help from a vet.

It is likely that the couch has a strong scent on it. The reason why it tends to lick the couch could be that it smells you scent on it and that the scent causes it to feel calmer. This would be more likely if it tends to do it more when you are not around.

It might be the case that it does it because there is food stuck to the couch. This would be more likely if it licks a certain part of the couch more and if it has been doing it more since you know that you dropped food on it.

Illness could be what is causing it to do it since it might be licking the couch to try and soothe its stomach. This would be more likely if it has started doing it suddenly and if it has been showing other signs of being ill. In this case, the best option would be to take it to a vet.

It could be the case that there is a nutritional deficiency in your dog’s diet that has resulted in your dog licking or eating things that it should not be. This would be more likely if you have not been feeding your dog regular dog food and if your dog has been trying to eat things that are not edible. In this case, it would help to take your dog for a checkup with the vet.

Sometimes, dogs will lick when they are bored. It might be the case that your dog has been licking the couch due to boredom. This would be more likely if your dog has been licking the couch before getting exercise but not so much after getting exercise. In this case, it would help to ensure that your dog is able to get the daily amount of recommended exercise for its age and breed.

It might also be the case that your dog has been doing it because it smells your scent on the couch. This would be more likely if your dog only licks the part of the couch that you tend to sit on and if your dog tends to do it when you are not around.