While you marvel at every falling flakes unique pattern and the cool calm that descends over the world with a fresh white layer, your dog seems to enjoy rolling around and chomping into snow drifts. So what is the deal with your dog eating snow? And is it normal?

Dogs probably like eating snow for the same reasons humans open their mouths as it falls from the sky or eat a handful off their mitten. Snow is tasty. Its different from many other foods and drinks. It melts pleasantly in our mouths and hydrates.

“I dont know if dogs should eat snow, but many certainly do,” says Andy Rollo, DVM, a veterinarian and co-owner of Madison Veterinary Hospital and Walnut Lake Animal Hospital in the suburbs of Detroit. “I have one that does, and I believe its for his own entertainment purposes. But so does my 7-year-old kid, so that isnt saying much.”

Rollos main concern with snow is what could be hiding inside the snow once it hits the ground and mixes with whatever is in the grass, in the dirt, or on the pavement.

They have a health condition: If your pooch eats snow obsessively, check with your veterinarian. It could be a sign of Cushing’s disease or thyroid or kidney problems, says Petful. PetHelpful adds that some dogs eat snow for the same reason they eat grass: to induce vomiting in order to settle an upset stomach.

Why Do Dogs Love Eating Snow?

Dogs learn and explore the world with their mouths. So naturally, they will be curious to see how it tastes and feels to chew. We all love to play with snow and, again, dogs largely play with their mouths, so eating it may just be part of their game.

Your dog may just like the taste. After all, it’s just frozen water, and dogs love water! It probably tastes and feels like the dog equivalent of a slushy or ice lolly.

Alternatively, your dog could be unhappy with the taste of the water in their bowl. You wouldn’t want to drink water that had been sitting out for days on end, would you? Dogs are no different, so make sure that their supply of water is always fresh and cold, from a clean source.

Though it’s not been scientifically proven, some experts believe that dogs’ arctic ancestors had to eat snow to survive. In arctic conditions, water sources can freeze over. So, ancient, arctic canines may have had to eat the ice and snow to stay hydrated instead! If this is true, snow eating may be an innate behavior passed down through genetics.

If your dog shows signs of dehydration, don’t wait for him to rehydrate himself, as he may feel too tired to do it. Instead, offer him regular drinks of water and maybe make him an electrolyte drink. If you think your dog is severely dehydrated, take him to see a vet as soon as possible or he could face organ failure.

Signs of dehydration include: 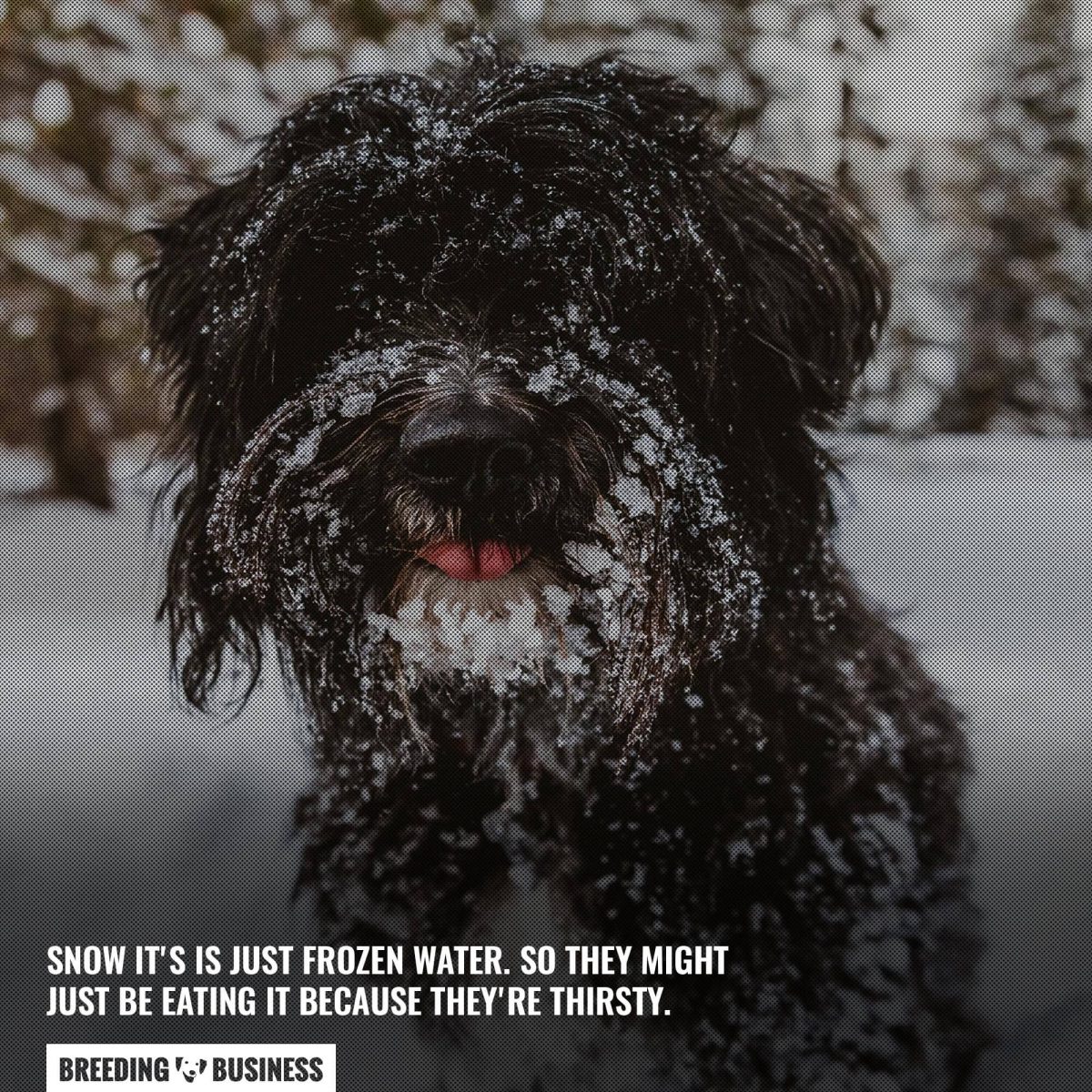 Snow eating could also be your dog’s way of self-medicating. If your dog appears to be repeatedly eating snow in order to make himself sick, he might be trying to get something out of his system. Typically, a stomach bug or parasite.

Usually, dogs do this with grass. But if the ground is buried in the snow, they can still use it, as snow also causes vomiting when eaten in excessive quantities. If a dog has a stomach bug, it will likely go away on its own. However, if you think they have a parasite, they will need a vet prescribed antiparasitic medication.

Signs of a stomach bug include:

Signs of internal parasites are similar but also include:

Alternatively, they might be experiencing a psychological issue. If your dog is eating snow compulsively, he may have obsessive-compulsive disorder. If he is often anxious or has a phobia, he might be indulging in this and acts over and over again to self-soothe. Some research suggests herding breeds like Border Collies and German Shepherds may be more prone to obsessive-compulsive behavior.

Don’t ignore OCD. It won’t go away by itself and may be causing your dog a lot of distress. Look up how to treat your dog’s OCD at home or see a behaviorist.

Generally, eating a bit of snow is good fun. But if your dog is eating excessive amounts of snow, it could be a sign of something more serious. Metabolic and hormonal illnesses such as Cushing’s disease, kidney disease, liver disease, hyperthyroidism, and diabetes are the most common causes of disease-induced extreme thirst (and subsequent urination), that your dog may feel regular water just doesn’t quench.

Signs of Cushing’s include:

It’s usually caused by a tumor on either the adrenal or pituitary glands. This creates a dangerous overproduction of cortisol (the stress hormone). It’s diagnosable via blood testing and is often treatable, sometimes curable with medication or surgery.

Signs of kidney disease include:

Causes are usually related to age, environment, or genetics, and it affects the kidneys’ ability to thoroughly clean the blood. Kidney disease is diagnosed via blood testing. It’s not currently curable but it can (usually) and must be treated. It’s treatable through dietary changes, medication, fluid therapy, and dialysis as a last resort.

Signs of liver disease include:

Causes are likely related to age, trauma, or genes and affect the body’s ability to digest food and drink and remove toxins and blood clots. Liver disease is diagnosed via blood and urine testing. There is no cure but it can and must be treated. Treatment involves dietary changes, supplements, medication, and sometimes surgery.

Signs of hyperthyroidism include:

Its primary cause is cancer and diagnosis is through physical examination of the glands and blood testing. Treatment options will depend on the stage of cancer but will either be chemotherapy, radiation, or surgery.

Both types of diabetes cause excessive drinking and urination in dogs. Other signs of diabetes mellitus include:

Diagnosis is via blood and urine testing. Neither has a cure, but both can be managed. Treatment for DM involves dietary changes and regular insulin injections. Treatment for DI involves regular veterinary administered injections of vasopressin or eye drops that you can do at home. If left untreated, dogs with diabetes will face fatal malnutrition/dehydration. If your dog displays any of these symptoms, take them to the vet as soon as possible.

Yes – Snow Is Usually Safe To An Extent

Snow, in and of itself, is typically safe for dogs to consume, if you’re monitoring how much of it they’re eating. After all, it is just frozen water vapor. However, experts have said that dogs that eat too much snow can undergo stomach upsets – which is no fun for anybody!

No – When Dogs Eating Snow is a Concern:

Where it can start to get dangerous is if your dog is eating other things HIDDEN in the snow. It’s not good for dogs to eat rocks, twigs, or certain plants, which can frequently be found in snow. So, it’s fine if you’re allowing your dog to have a taste of the snow, just make sure you keep track of how much they’re eating, and what may be concealed inside it.

Dogs that aren’t happy with their water source will eat snow in order to hydrate themselves. However, snow doesn’t contain as much water as one may think. In fact, snow is only about five to 10 percent water.

Is it OK for dogs to lick snow?

Contrary to popular belief, it’s not safe for your dog to eat snow. Why? Beneath the snow could be a bounty of waste, chemicals and salt that are not appropriate for ingestion. Eating snow can also lower your dog’s core temperature, ultimately, making them colder and risking conditions such as hypothermia.