Training shouldn’t be too hard with this mixed breed. The American Cocker Spaniel parent is very eager to please and loves learning new things with its families.

And the Shar Pei parent is very clean. In fact, they have even been known to potty train themselves!

Make sure to stick to consistent, short and exciting training sessions, using a positive reward method for best results.

Training can provide some exercise, but you need to make sure the mini Hippo dog gets the opportunity to stretch his legs every day.

Going for regular walks, and playing fun games where he can run in a safe enclosed area is a great idea.

This breed won’t bark a lot, so it is a great choice if your neighbors tend to complain about pet noises. In fact, many dog lovers end up surprised or worried once they realize their new Mini Hippo puppy doesn’t bark.

Fortunately, some of the traits these breeds share are friendliness and a desire for affection, so you will seldom get a dog that is challenging to live with.

However, keep in mind that they do tend to drool a bit. If it’s the dog’s saliva that’s causing you issues, this might not be the best dog breed for you.

The American Cocker Spaniel will shed moderately, but the loose hairs will stay stuck in its wavy fur. This will make it appear as if they don’t shed at all. This also makes them excellent for allergy sufferers, as their hair won’t fly everywhere.

While it is unknown who the first breeder to create this crossbreed was, it is known that it originated in the USA. It is a mixed breed of a Cocker Spaniel and a Shar Pei. As its name suggests, these dogs look like tiny, furry hippopotamuses, and that is adorable!

First things first, where does this mixed breed come from?

Mixed breed dogs like the mini Hippo dog are quite a modern trend. They are known as ‘designer breeds’ that try to achieve a favorable blend of the parents’ characteristics.

And it’s quite a controversial topic! You can read more about the purebred vs mixed breeds debate here.

As for the mini Hippo, because this mix is quite a recent creation, to get a better idea of its history we need to take a look at the parents. 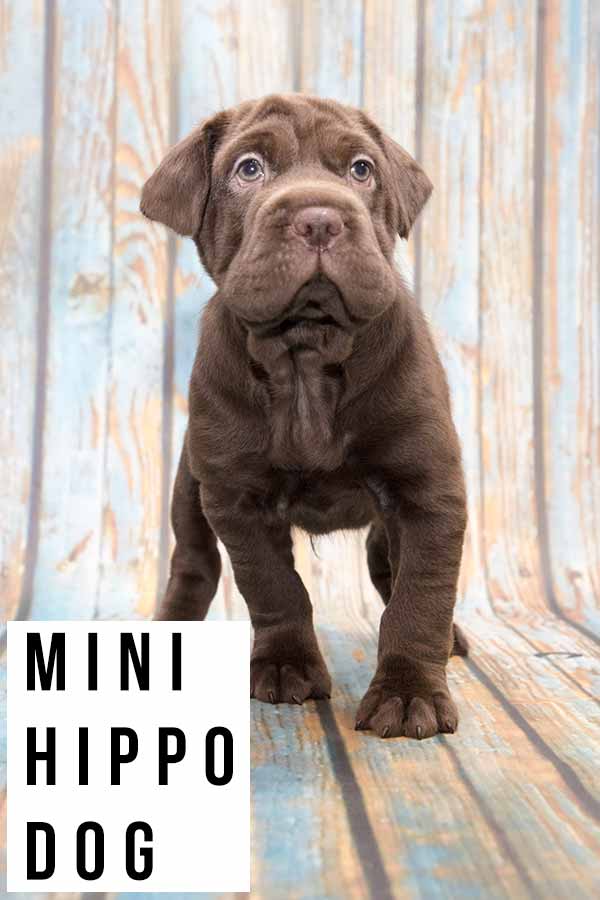 The Shar Pei parent has a complex history that you can read more about in our complete guide to this breed.

But, as a brief overview, these dogs originated in China. They almost became extinct throughout the 20th Century, but were popularized again by a man named Matgo Law.

One of the original purposes of this breed was as a fighting dog. Many think that its loose, wrinkled skin aided this.

When another animal bit its fur, the Shar Pei could still move easily to continue its fight.

And although its purpose has changed to now become a popular family pet, the Shar Pei wrinkles have been further exaggerated by breeders. We will cover this appearance more later.

Most Cocker fans know that there are a few different versions of this breed. We will focus on the American Cocker Spaniel in this guide. But remember, your Cocker Pei may differ if you use an English Cocker, or whether you choose a working or show variety.

Both the English and American Cocker Spaniel shared the same history until the 20th Century.

Especially after Disney’s Lady and the Tramp came onto the big screen.

Now, let’s move on to some fun facts about this mixed breed.

What breeds make a hippo dog?

They are typically short, small to medium-sized dogs that are squarish in the body. The Mini Hippo is part of the designer, companion, sporting, and non-sporting family. They can be anywhere from 40 to 65 pounds and be 18 to 21 inches in height.

Is there a miniature hippo?

These cute little pups are becoming much more popular because of their interesting appearance and kind nature. This dog is a crossbreed between a purebred Cocker Spaniel and a Chinese Shar-Pei.