Cross one of the many varieties of hound breeds with a Labrador and you’ll end up with the energetic Lab Hound mix.

Depending on which hound dog is used as a parent for your pup, your cross will be known as a Bassador, Dachsador, or Labbe.

Keep reading to learn more about the different Lab Hound mixes out there and some of the characteristics you can expect with this cross.

On average, Lab hounds are medium to large dogs. The average height of these pups is between 23 and 30 inches tall, and their average weight is around 55 to 110 pounds.

More often than not, Lab hounds also adopt the short coat of a Labrador Retriever.

Unfortunately, other than these features, the general appearance of a Lab hound mix is hard to generalize.

These pooches come in all sorts of coat colors, coat markings, and overall silhouettes. The good news is that every Lab hound is truly one-of-a-kind! 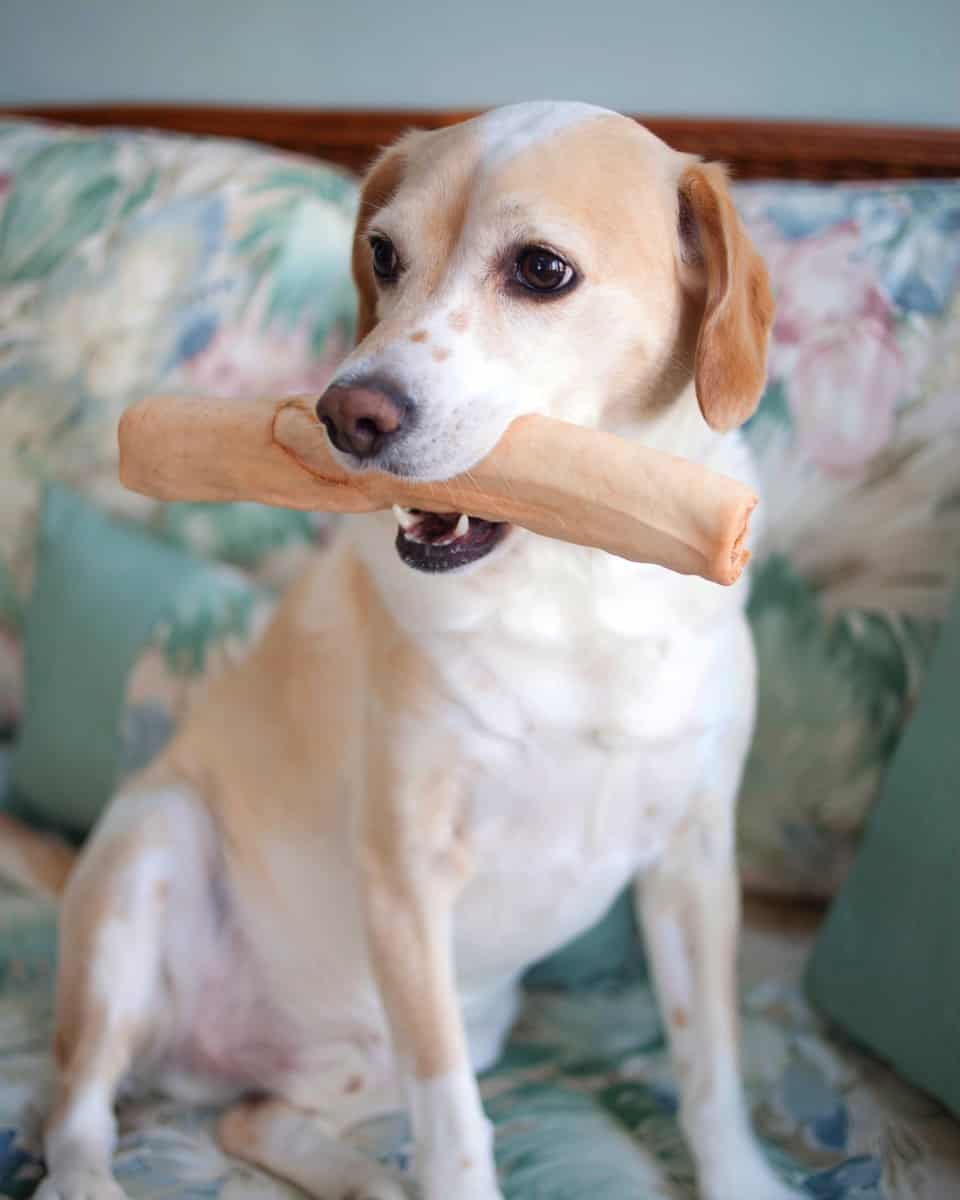 The Beagle Lab mix, also known as the Beagador, is the hybrid between a Labrador Retriever and a Beagle. In some parts of the world, these dogs are also called the “Labbe.”

Beagles have short fur that comes in various combinations of black, white, tan, and red. These pups are roughly 12 to 24 inches in height and 20 to 70 pounds in weight.

Because of the wide variety of the Beagle, the appearance of Beagle Lab mixes is usually diverse. However, one telltale feature that a dog is a Beagador is its floppy ears. 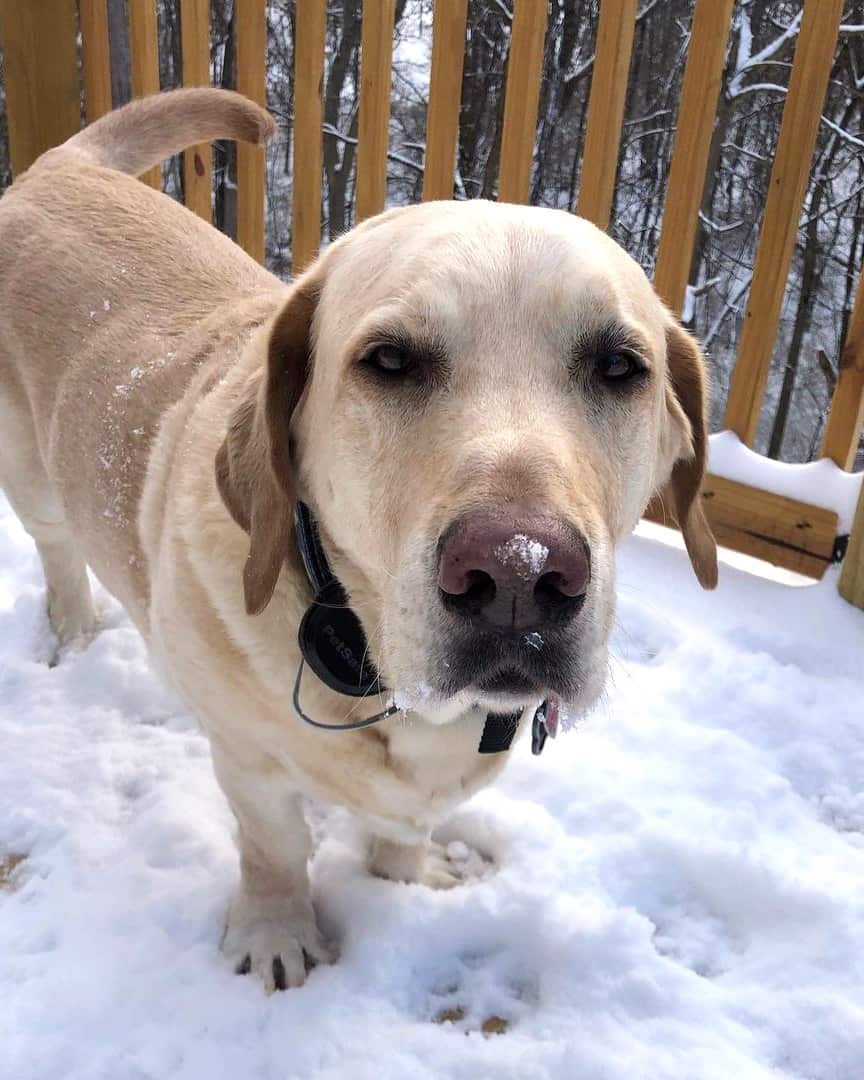 If those cute, stubby legs don’t give it away, the adorable pooch in the photo above is a Basset Hound Lab mix. This pup is the hybrid of a Labrador and a Basset Hound.

Basset Hound Lab mixes come in black, white, tan, red, or any combination of these colors. These pups have short coats that are slightly less wrinkly than the Basset Hound breed.

In terms of temperament and personality traits, this Lab hound mix is usually a timid couch potato that is extremely loyal and easy to train.

If you are looking for a gentle pet that does not require much exercise, this is the one! 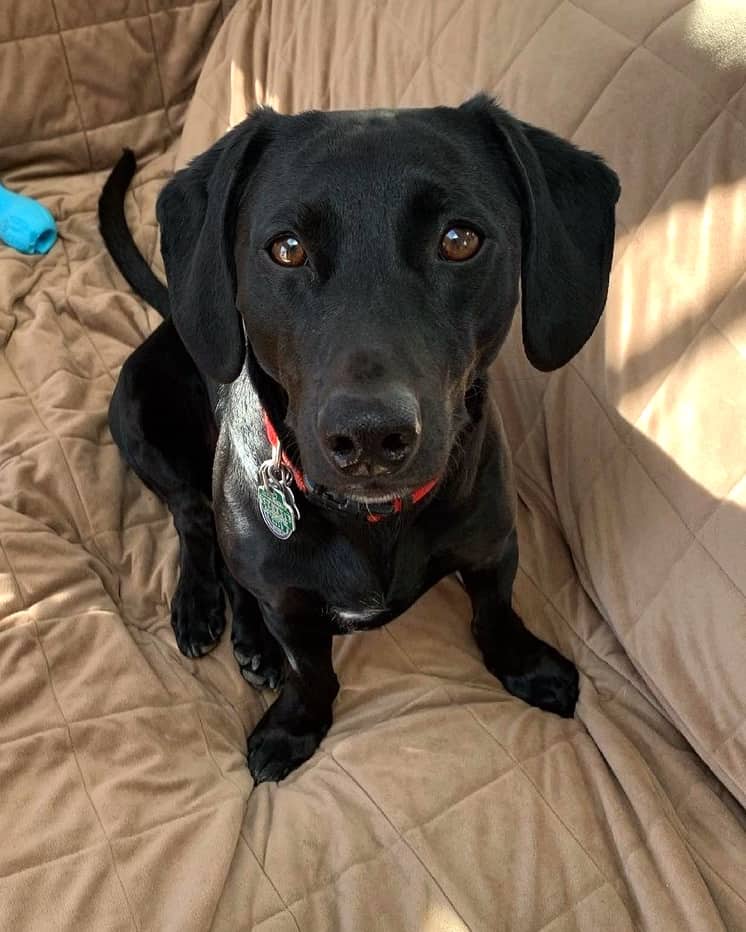 The Dachshund Lab mix, also known as Dachsador, is the cross between a Lab and a Dachshund. This mixed breed is slightly smaller than a Labrador Retriever yet somewhat bigger than a purebred Dachshund. 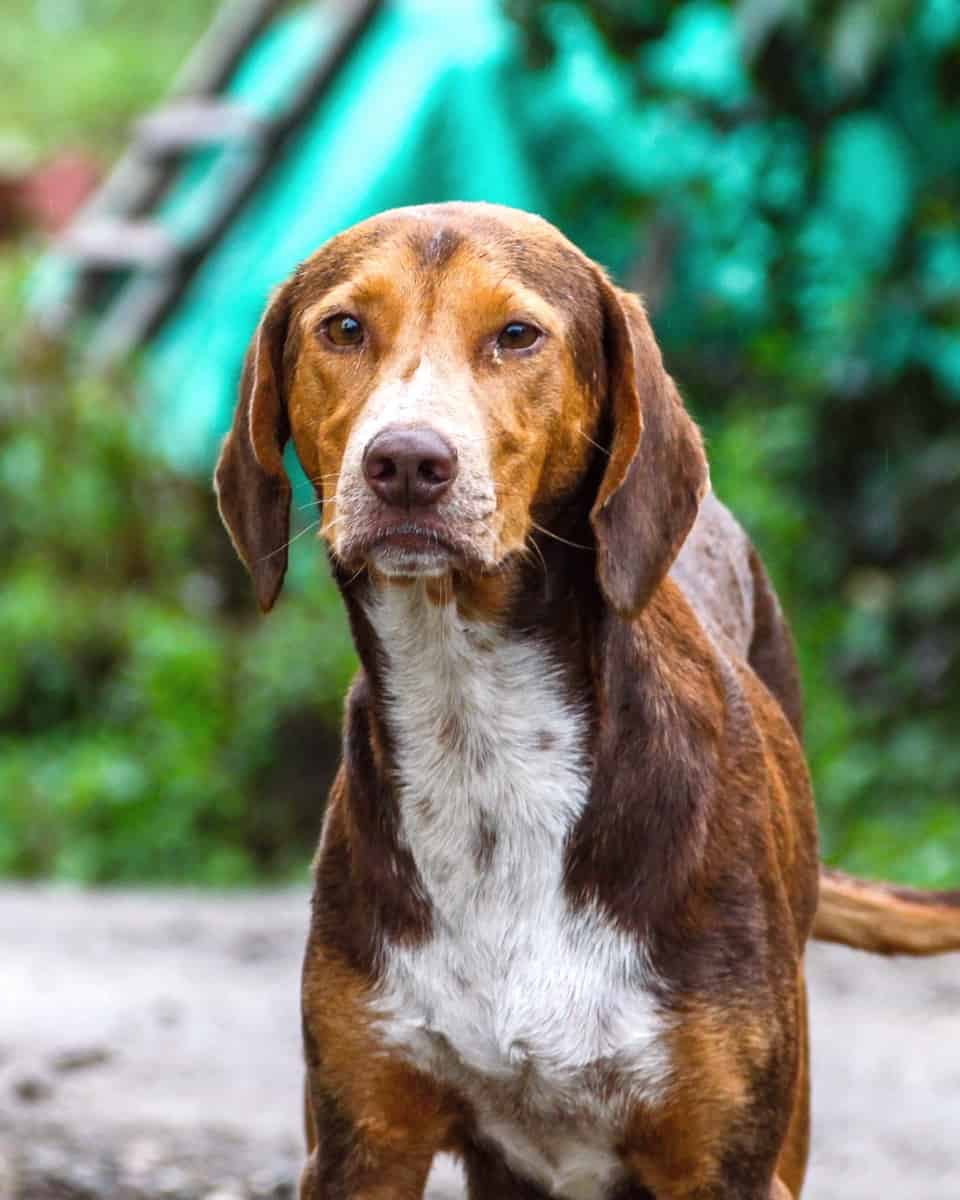 Bloodhound Lab mixes, also known as Labloodhounds, are the offspring of Labs and Bloodhounds. These pooches are muscular, heavy, and powerful.

On most occasions, these dogs adopt the wrinkly skin of their Bloodhound parent.

The Labloodhound mix is an excellent hunter with above-average endurance. These qualities make them ideal as service dogs for the police and military.

Unfortunately, these dogs have a pretty short lifespan, at around nine years. 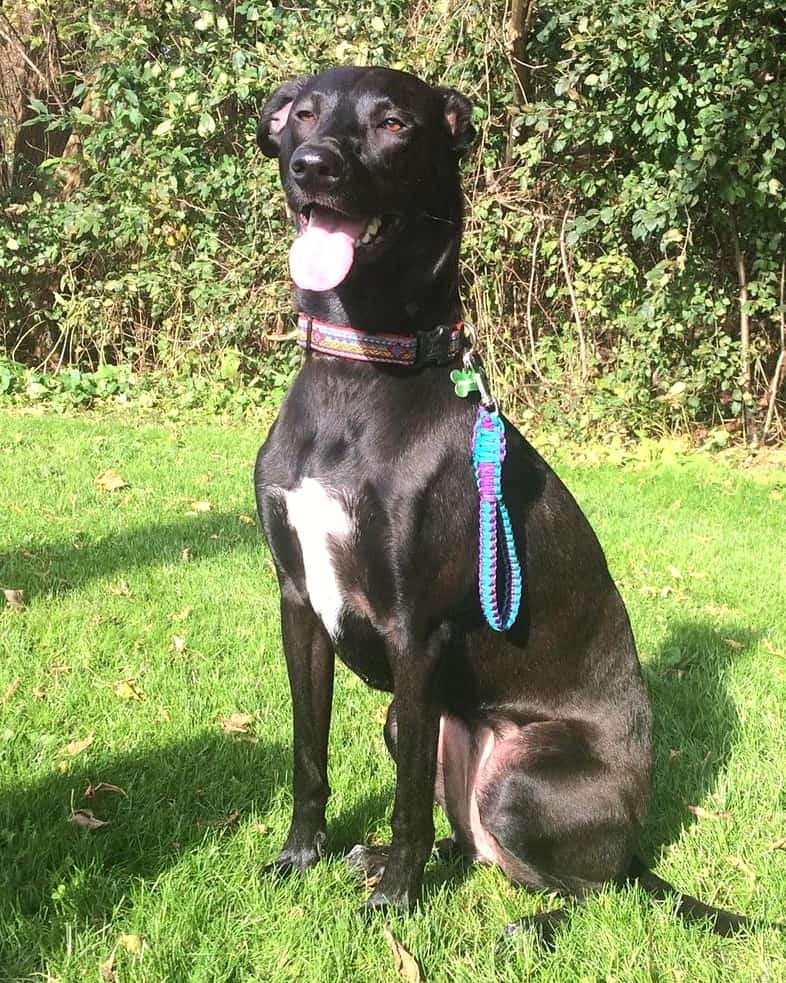 The Greyhound Lab mix is a tall and elegant dog. Its telltale features are its long legs, broad chest, and small ears. The aerodynamic body of this mixed breed is adopted from its Greyhound parent.

Despite having an extremely athletic physique, the Greyhound Lab mix is a couch potato. These dogs like short bursts of energy, but they do get tired quickly.

The photo above shows a tiger-striped Plott Hound Lab mix. This unique-looking mixed breed is the cross of a Labrador Retriever and a Plott Hound.

This hound Lab mix is known for its athleticism, shiny coat, and brindle markings.

Plott Hound Lab mixes require moderate to heavy exercise. It is worth noting that this mix is a very vocal dog. They tend to bark if they do not get enough mental stimulation and exercise!

The Foxhound Lab mix is a cross between an English Foxhound and a purebred Labrador.

These dogs usually sport a bright red coat color similar to a fox red Labrador. On some occasions, a Foxhound Lab mix may have black or white markings on its back.

Temperament-wise, this Lab hound mix is sociable and gentle. They are playful as well, especially in their puppy years! 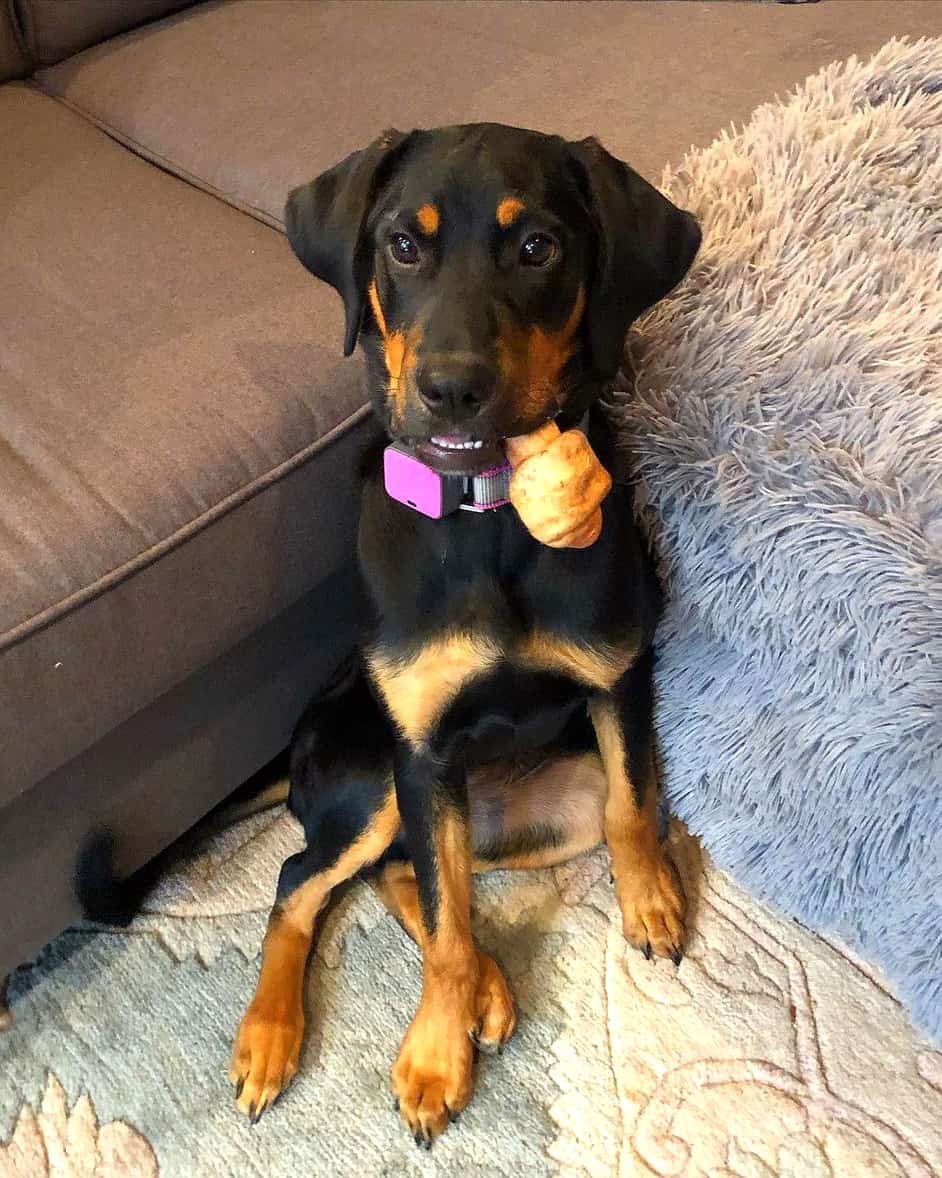 The Coonhound Lab mix is a medium-sized dog with slender legs and big floppy ears. This Lab hound mix is a super active pooch that can climb trees. They are speedy runners as well!

After its AKC recognition in the United States, Labrador Retrievers quickly became a fan-favorite dog breed. The temperament of these dogs is simply unmatched as a family companion.

As a result, many breeders decided to mix-and-match Labs with different dog breeds such as the hounds.

In 1989, the first Labradoodle was bred. While Labradoodles are not Lab hound mixes, their popularity paved the way for Lab hounds.

Due to popular demand, breeders were able to sell Lab mixes for a higher price. These pooches quickly became one of the so-called “designer dog breeds.”

In the hopes of creating the next big designer dog breed, breeders crossed Labs with different kinds of hounds. Their objective was to create a unique-looking dog that has the same temperament as the Labrador Retriever.

Unfortunately, the Lab hound mix never dethroned Labradoodles as the most popular Lab hybrid. However, Lab hound mixes still serve as alternatives for people looking for particular traits in a dog.

While you may never be able to fully predict the personality of the hybrid Hound Lab mix these dogs normally exhibit a sweet, playful personality.

They are also extremely loyal and loving and will constantly crave attention, especially from one person.

These personality traits make the Lab Hound mix great family companions but they don’t get along well with other pets.

Due to their strong prey drive and hunting instincts, your Lab Hound mix may try and chase your smaller pets at home.

They also won’t stop when they find a scent to track, which can include tugging on a leash or even trying to dig under a fence.

Due to this and their energetic nature, these dogs are not considered one of the easiest mixed breeds to train.

What is a lab hound mix called?

The Hound Lab mix is said to be generally affectionate, congenial, and warm. It is even-tempered and gentle like a Lab, making it a wonderful pet. However, it has the energy levels of the two parent breeds and boundless curiosity. Owners have to keep an eye on them to ensure they don’t get into too much mischief.

Lab and hound mixes go by a variety of names, including Labbe, Bassador, and Dachsador, depending on which hound is mixed with the friendly and popular Labrador Retriever.