Skip to content
The best thing to do about a dog that whines whenever it’s bored is to create a great play and exercise routine. With the right routine, your German Shepherd won’t need to whine in the first place. Make sure to incorporate mental stimulation as well as physical stimulation in this routine.

There are a number of possible reasons why your German Shepherd might have a habit of whining. Below I will mention a number of them. If you are unsure of what might be causing it then consider taking it to the vets to rule out illness or injury.

The reason why your German Shepherd whines a lot could be because it is hungry. This kind of whining will be more likely to occur at the time that you would normally give it food as it is anticipating that you are going to feed it soon.

This type of whining could also happen when you forget to feed it as it is its way of letting you know that you have forgotten to give it food.

The cause of the whining could be that your German Shepherd needs to pee or poo. This kind of whining will be more likely to occur when it has not had the chance to go outside for an extended period and it is letting you know that it is time to let it out.

This type of whining will be more like to occur in the mornings. To prevent this it is necessary to let your German Shepherd go outside regularly.

The cause of the whining could be that it is trying to let you know that you need to give it more exercise. German Shepherds were bred to work with humans on a daily basis doing very intensive tasks.

With that being the case, it can take a lot of exercise to properly stimulate them and if they don’t get it then it can cause hyperactive behavior. If your German Shepherd isn’t getting a lot of exercise then it is important to make sure that it does. You can read the next section to see some ways that you can do so.

The reason why it is whining a lot could be because it is in pain or it is ill. If you think that it might be the reason then you should take it to the vets.

The reason why your German Shepherd has been whining a lot could be because it is hoping for you to give it some kind of attention. If you have not been giving it much attention then it will make this type of whining much more likely. You’ll also be encouraging the behavior if you reward the whining with attention. If the reason that it whines is to get attention then you should try ignoring the behavior and then rewarding it when it is being well behaved.

If it has done something that it knows will make you unhappy then it can cause it to whine as that is one of the ways that dogs will submit and say that they’re sorry.

Related post: How to tell if your German Shepherd loves you

Why your German Shepherd whines a lot

Each of the different reasons why your German Shepherd whines a lot will likely come with a number of clues in the way that it does it.

Below, I will mention a number of reasons why your German Shepherd might whine a lot and the clues to look for.

The reason why your German Shepherd whines a lot could be that it is ill or injured.

This would be more likely if it only started to whine recently and if something recently happened that might have caused it to become ill or injured. For example, it might recently have eaten something it shouldn’t have or gotten hit by something.

If you think that it might be whining due to being ill or injured then the best option for you would be to take it to a vet.

Another reason that it tends to whine could be that it is bored.

It could be the case that it whines a lot because it wants to get attention from you.

This would be more likely if it tends to whine when you have not been giving it much attention. It would also be more likely if you start to give it attention when it starts whining. In this case, it will have learned that whining results in it getting the attention that it wants.

Another cause of it whining could be that it knows that whining will get it something that it wants such as to go outside, to get food or to get attention.

If this is the case then it would be more likely that it would only whine in specific situations where it would normally get something.

Like humans, dogs can become stressed and this could be why your German Shepherd has been whining.

If this is the case then it would be more likely that your German Shepherd would only have started to whine recently. It would also be more likely if something happened, recently, that might have caused it to become stressed.

Examples of possible causes of stress could be:

Another possible reason why it might whine a lot could be that it is frightened.

This would be more likely if it only seems to whine when something happens that might cause it to become fearful.

German Shepherds can also whine when something is happening that could cause it to become excited.

Related post: How to tell if your German Shepherd loves you

The reason why it whines a lot could be that it has learned that whining gets it things that it wants.

This would be more likely if your method of getting it to stop whining is to give it attention when you normally wouldn’t have been, to take it for a walk or to give it treats. 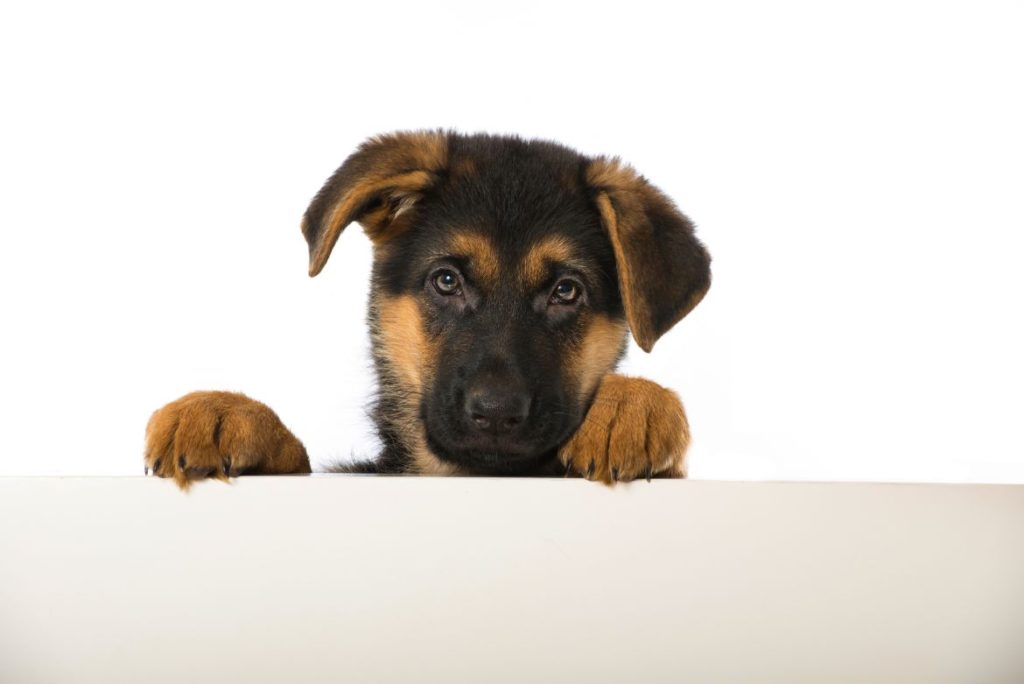 Dogs that whine out of fear can be helped by helping to build their confidence through reward-based training. The best ways to boost your dog’s confidence is through basic obedience training so he learns basic manners and how to behave at home and in public. Playing games your dog loves and excels in is a great way to boost confidence but don’t forgo challenging your dog and rewarding him for a job well done. Dogs that suffer from low confidence do best when challenged with simple tricks that offer immediate rewards, such as touch, shake, find it, etc.

The bottom line is, training takes time and teaching your dog to stop whining is no different. If you need to, buy some earplugs but until then, in most cases, by simply ignoring your dog, refraining from petting, feeding, treating, or even talking to him will eventually send the message that whining will get him nowhere. When your dog is quiet, praise and reward him for his desired behavior-he’ll then be getting what he wants, your attention, in a positive way.

After you’ve identified what is triggering your dog’s whining, the best way to stop it is through distraction training and treats. If your dog is whining for a treat, obviously, you will not reward him for his whining. Rather engage him in some other form of training and treat after he does a good job. If you simply have no time to stop what you’re doing, you will have to ignore your dog and endure the frustration of hearing him whine until he learns that he can longer get what he wants. If you need to, crate your dog or separate him from the rest of the family during mealtimes until you can put a stop to his behavior.

The reality is, dogs whine for many reasons. Your dog may have trained you to give him a treat or a tickle when he whines. Or, perhaps he whines when he’s feeling excited, anxious, or concerned about a new situation. He may even whine when playing with other dogs or as a sign of appeasement.

Title says it all- it was great for the first 2 days, but a retrieving chomp split it underneath (not at the seam, which was what I was expecting). it barely bounces now, and gets full of dirt- the split isn’t big enough to be a problem just yet, but without the bounce, our dogs say “meh”.

How do I get my German shepherd puppy to stop crying at night?

Avoid speaking in excited, loud tones, and keep your movements slow and calm. Wait to pet and interact with your dog until she’s less excited. It may also help to teach her to do something you’d like her to do instead of whining, such as sitting or hand targeting when she greets you or other people.

How do you stop a puppy from whining for no reason?

Excessive vocalization can just mean that your dog likes to talk too much and needs a little extra training. On the other hand, if it’s accompanied by other behaviors or only happens in certain situations, it could be a sign of a behavioral problem, such as anxiety or aggression.

Why is my German Shepherd puppy so noisy?

Excessive vocalization can just mean that your dog likes to talk too much and needs a little extra training. On the other hand, if it’s accompanied by other behaviors or only happens in certain situations, it could be a sign of a behavioral problem, such as anxiety or aggression.