Dolly caught her dew claw on the carpet. One minute she was fine, next there was blood everywhere and she was busy licking her foot. I wondered what on earth was wrong. When she let me have a look I could see that she’d ripped the nail on her dew claw almost clean off.

In general, most dew claw injuries can be attended to at home. However, if you are concerned you should contact your vet for advice.

I called the vet and off we went for some help. As she had almost detached the nail completely so the vet removed it. Dolly was given painkillers and the wound dressed with a cute roll of vet wrap to cover it up for a few days. Eventually the nail grew back as if nothing had happened.

Did you know that your dog’s dew claw is actually a very interesting part of their anatomy? Don’t assume that these claws are simply vestigial and serve no purpose and any injury to the dew claw needs immediate attention.

You can tell this has happened because the claw will look out of position with the rest of the claws. If you’re still not sure, try touching the area around the dew claw. If the dog won’t let you near it, the dew claw is probably dislocated and causing pain.

Some people assume that dewclaws are vestigial and serve absolutely no purpose. However, this is not the case as these claws serve certain roles. For instance, when your pup wraps his paws around objects, it is these claws that offer him extra grip.

Besides, when your dog is running, the dewclaws act as a stabilizer. When he makes a sharp turn, for instance, the dewclaws splay out and help him spin. These claws also take off pressure from other dog’s toes during such turns.

So, without the claws, your dog can damage his toes or injure his wrist joints. This is also one of the reasons why the dewclaws sometimes get dislocated.

The claws are not only connected to your pup’s legs with muscles (and sometimes bones) but they are also more loosely attached compared to other nails. This means that they are more likely to get caught on things and get dislocated or torn off.

How to Tell If Dew Claw Is Dislocated 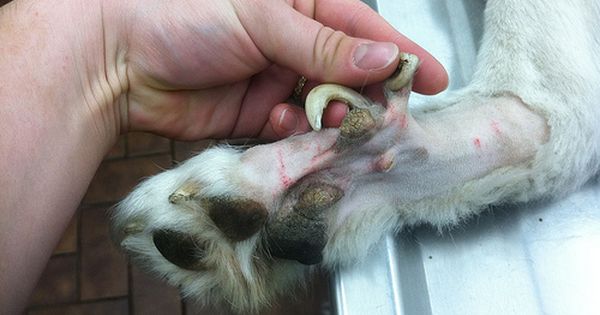 So, how do you know that your dog’s dewclaw is dislocated?

Well, if the dewclaw looks like it is out of place from your pup’s leg, there are high chances that it is dislocated.

There are also a few signs to watch out for, including:

What Should You Do When Your Dog’s Dew Claw Is Dislocated?

When you notice that your dog’s dewclaw is dislocated, the first thing you should think about is how you can reduce the risk of the dewclaw getting infected.

Apply a simple dressing on the affected area to reduce the risks of infections. We recommend using a sterile pad from your doggy first aid kit and a stretchy bandage wrap.

If the dog is persistently licking the dislocated dewclaw, discourage him immediately—if possible, get him to wear a cone. Remember that the mouth harbors a lot of bacteria, which can introduce infections where none existed.

If there is active bleeding, use styptic powder (or flour) to stem the bleeding ASAP. Cover the dewclaw with the powder or flour and gently apply pressure with a clean cloth until the bleeding stops.

But if there is no continuous bleeding, consider putting something like a sock on the dog’s foot so that the dewclaws are not further dislodged and cause recurrent bleeding.

Finally, call your vet for more professional input. Provided that the dislocated dewclaw is not bleeding and you’ve managed to put something like a sock on the affected foot, your furbaby should be alright until your vet arrives.

Related posts: How to Stop a Dog from Licking his Wound without using a Collar

Dislocated dew claw could lead to infections and other health issues due to its connection with the bone and/or leg muscles.

So, the sooner you call your vet or implement the above-mentioned suggestions to ease your pup’s discomfort and reduce his risk of the area getting infected, the sooner your canine friend will be back to his old self again.

Can a dew claw get dislocated?

Your vet can trim back the claw to smooth it off, clean around the area, bandage it up and let the claw regrow. Torn dew claws, where the whole claw is torn from the bone, are removed and the wound cleaned. This is also the case if there is still some connection to the bone.

How do you know if dew claw is broken?

Looks out of place (dislocated)There are chances of the dewclaw getting dislocated as the nail can get stuck onto a surface due to its location. Bloody surroundingIf there is blood surrounding the dewclaw, you need to get it checked immediately.

How do you treat a bent dew claw?