The Mini Walrus Dog, also known as Ba-Shar or Sharp Asset, is a cross of two purebreds – Mini Basset Hound and Mini Chinese Shar-Pei. Originated in the United States in the 1990s, these adorable pups are loyal, intelligent, friendly, and inherit some of their parents’ best traits. Hence, they are recognized as excellent family companions, have distinct features, unique personalities, dispositions, and love to be around their human family. But unfortunately, they might show indications of separation anxiety when they are left alone for too long.

Mini Walrus dogs interact surprisingly well with kids, especially if the children are older and conscious of respecting canine boundaries. These breeds are an ideal companion for an active family who can offer them enough space to roam and has the time to train and keep an exercise regimen.

Mini Walrus puppy’s body is more of the Basset Hound, but the coat is wrinkly like the Chinese Shar-Pei. However, they need proper socialization and exercise to avoid hunting instincts and detrimental tendencies. In addition, they have a stubborn streak and need lots of mental and physical stimulation. So, pull out all your persistence and patience to get these cue balls into shape. Once trained well, Mini Walrus dogs will serve as perfect watchdogs and furry companions.

I can’t stress this enough. You should train your mini walrus puppy as soon as you get one.

Else, he’d grow up to be aggressive towards strangers, especially if you’ve got cats and other dogs. Even with training and socialization, a mini walrus may still show little signs of aggression.

For instance, he may remain aggressive with other animals when it’s food time, even if they generally get along well. So, in this case, you’ll just have to feed him separately.

You must train this dog breed with a firm hand to keep him under control. Also, positive reinforcement training works the magic, but firm handling is the watchword.

On the other hand, a walrus dog would require moderate exercise daily. Say, about 30 minutes daily to keep them satisfied. It can be a little lazy sometimes, if not most times. Whenever its tired, it’d lay flat out on the ground, which, in a way, is comical.

The Walrus Dog, which is a mixed breed of the Basset Hound and Shar-Pei, is also referred to as Ba-Shar dog or Sharp Asset.

As with most designer breeds, its origin can’t be pinpointed to a specific date. However, it’s likely to have originated in the 1990s, about the same time when crossbreeds became a thing.

But you can find out more about the history of its pure breed parents. More on that later.

The Basset Hound comes from a French heritage that dates back to the 1800s. Although, some historians claim it also has its descendants from Great Britain.

For what it’s worth, Basset is the French word for “low,” which sort of set things straight.

That being said, like Shar Peis, the Basset Hound was bred as a hunting dog. It comes as no surprise since it has a sense of smell that’s second to none other than bloodhounds — a trait that possibly got them their family name (hound).

Anyways, due to its powerful sense of smell, the Basset was extremely popular among French Aristocrats who saw hunting as a way of life. And that was a lot of them. 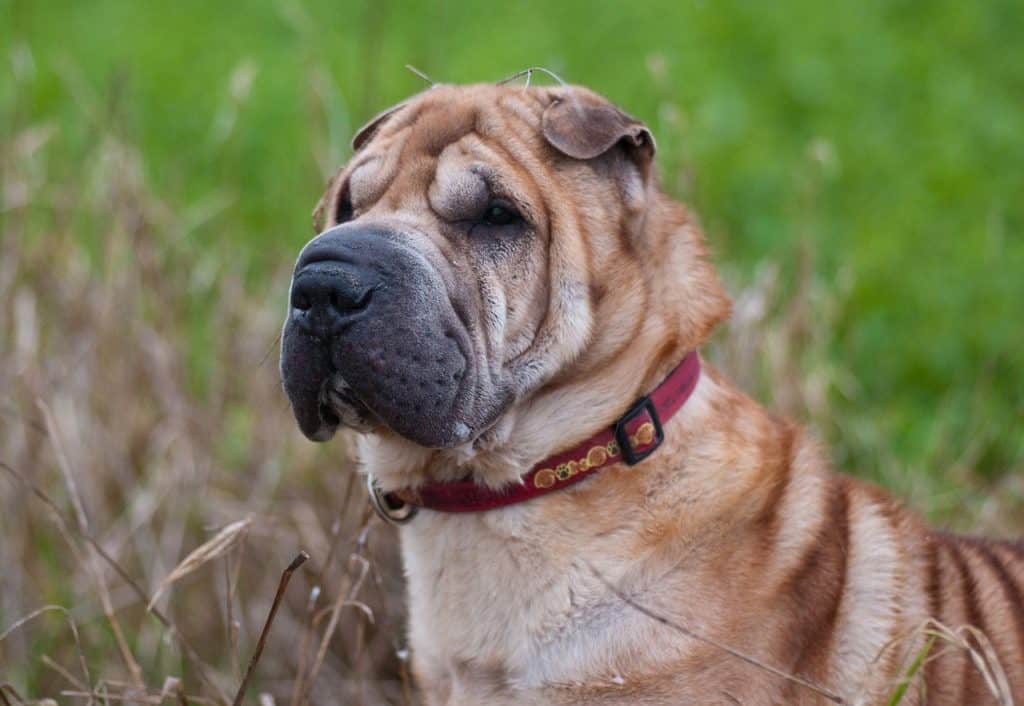 Shar Peis have a rich and ancient heritage that dates back to 200BC during the Han Dynasty. Although, some sources say the dogs found on artworks during this era could as well have been Pugs.

Moving forward, the Chinese Shar-Pei was initially bred by the upper-class citizen as hunters, herders, and protectors of livestock and property.

Fast forward to the communist regime. Dog ownership was discouraged and so many adorable breeds faced a slaughter sentence, including the Sharpei.

In a bid to save them, a Hong Kong breeder, Matzo Law, smuggled about 200 dogs into the United States to save them from extinction.

The rest they say is history. Shar-Peis continued to flourish in America but weren’t recognized by the American Kennel Club as a breed until 1992.

Again, a Bashar dog may take a look that bends towards one end of its parents or look like both of them. It all boils down to which parent has the stronger gene.

Knowing the appearance of the parent breeds gives you an idea of what to expect when you’re getting your mini Walrus dog.

The Basset Hound is also popular for its short legs. It makes more sense when you know it’s named after the French word for “low.”

The short limbs of the Basset Hound are a result of the prevalence of certain type dwarfism in the breed. Hence the short, but really powerful legs. Although large paws also make up for what it lacks in limb length.

Adults can reach a peak height of 15 inches, and weigh anywhere between 40 to 65 pounds.

Another prominent characteristic of the Basset’s appearance is the sad and droopy face. Yes, almost like that of Droopy from Tom and Jerry. This is as a result of its long ears and wrinkled face.

The Basset has a short-haired coat that’s usually tri-colored with a mix of black, tan, and white.

The Sharp-Pei has a distinctive cylindrical body shape and short triangular ears. It also has a squarish and wrinkly face that looks like the head of a hippo.

The Shar-Pei mostly has a loose and rough to touch coat. This is because they were originally bred as hunting and fight dogs, making it hard for other animals to grab unto.

The coat is solid-colored, with colors like black, brown, cream, and many more. Actually, there are only about 16 colors recognized by the AKC for this breed.

It has some other unique physical characteristics like its blue-blackish tongue. Also, the famed wrinkles of the face clear up as it gets older!

Although some adults may become more wrinkled, mostly, they would only have wrinkles on their face, shoulders, and tail base as they age.

On the other hand, an adult Shar-Pei usually grows up to about 22 inches tall, weighing between 35 to 65 pounds. You should also know that there are miniature and toy Shar-Pei that only grow up to 18 and 15 inches, respectively.

For the most part, the Walrus dog would take the stature of the Basset, and wrinkly coat of the Shar-Pei.

It would have the large head of its parent breeds, with wrinkles on the forehead and a muzzled face. To round off its awesome cuteness, it has piercing eyes to cheer up its looks.

Due to the inherited Basset dwarfism, it only stands between 10 to 13 inches high. Overall, it’s a medium-sized dog weighing around 30 to 50 pounds.

The coat of the Walrus dog is likely to be wrinkly and somewhat coarse but in a good crinkly way.

What is a Walrus dog mixed with?

Walrus, also known as Ba-Shar, is not a purebred dog. This cute little guy/girl is a mix of Basset Hound and Chinese Shar-Pei. And that’s what makes it hard to pinpoint its temperament. You see, it’s easy to talk about purebred dogs.

How big do Walrus dogs get?