Have you caught your dog eating the stuffing out of one of their toys? Is it dangerous, you might be asking? Can dogs eat polyester stuffing? What if they are coughing, vomiting, or having diarrhea? Does that mean stuffing is toxic for dogs? Let’s dive deeper into the questions and explore the dangers of stuffing, what to do if your dog eats it, and alternatives to stuffing.

Polyester Stuffing Can Be Dangerous for Dogs

Depending on how much stuffing a dog eats, he may suffer some major medical problems. If a dog eats only a small piece of stuffing, chances are he will be OK. You’ll need to monitor your canine companion for any signs the stuffing’s making him sick. Symptoms you may notice include:

If you know for sure your fur baby only ate a very small piece stuffing, just watch him for a day or two. If the stuffing comes out in his vomit or poo, then he’ll be OK. However, if the vomiting and diarrhea don’t stop within 24 hours, then be sure to call the vet right away.

If you notice any one or more these symptoms, then be sure to call the vet right away. Your dog’s life may depend on it. The sooner you call the vet, the better because this could be a medical emergency.

What happens if a dog eats toy stuffing?

Ever wondered what happens if a dog eats foam or toy stuffing? Well, I can tell you because my dog has actually done it.

On the occasions it has happened, I tend to find him eating part of his fabric toy before I get a chance to intervene. This is typically his way to get to the squeaker inside it, as he tears at the polyester stuffing when opening the toy up.

You can see a photo below where he has done this before, but we caught him in time. Before this occasion it had happened once and I had tried to get most of the polyester stuffing out his mouth, but he’d already eaten quite a lot already. 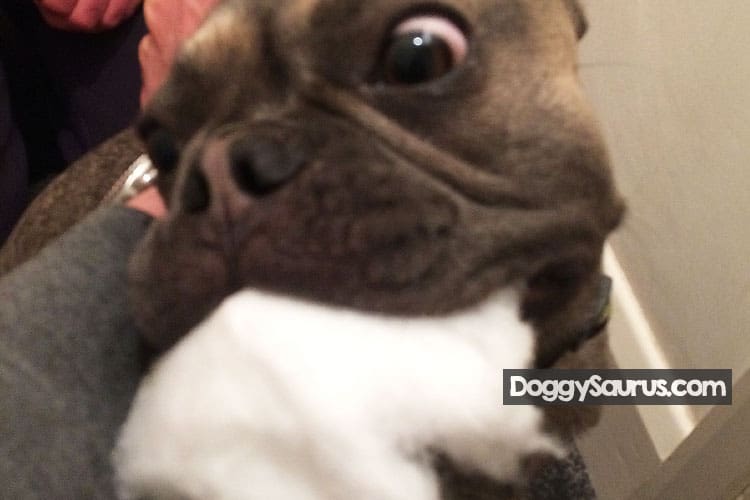 Your natural instinct is to make a grab for stuffed animal when you see it in your dog’s mouth.

That’s what I did on that one occasion, but unfortunately that produced the opposite reaction to what I wanted; he produced a reflex and swallowed some of the fabric and stuffing.

My immediate action was to call the vet and then drive up there. The vet checked our dog over and made the call to let the fabric and stuffing pass though as it was small and unlikely to cause him in any harm.

Within 12 hours it had come out in his poop – I was thankful it was so small so there were no complications.

It might not have been that way though, as it’s not unheard of for polyester stuffing and fabric to create internal blockages in dogs, leading to more serious problems.

Having gone through a scare like, I’ve decided to compile the steps you should take when your dog ate a small stuffed toy, as described by my vet.

Can dogs eat fluff from toys?

Dogs should not ingest fluff or stuffing from their toys or other household items, such as cushions. This is particularly true of polyester fluff, which contains toxins remaining from the production process.

Even non-toxic, natural polymers present a serious risk if ingested. For example, bowel obstruction is a condition where your dog’s digestive system gets clogged up by a foreign body. That causes several serious additional problems and can be fatal if left untreated.

If your dog is a serial chewer and tears up anything soft, it’s best to limit their access to anything that contains stuffing.

There is the additional risk of stuffing becoming a choking hazard. This can also occur when your dog is vomiting up the stuffing they have swallowed.

Consult your vet immediately if you suspect that your dog has ingested stuffing.

It is plausible that a dog could pass a small amount of polyester stuffing, but it isn’t worth taking the risk.

If the stuffing does clog up your dog’s digestive system, the result can be fatal. It only takes a couple of days for the damage to be so severe that your dog might be unable to recover.

If you suspect that your dog has eaten stuffing, the best thing to do is visit your vet immediately. They will be able to tell you what the best treatment is and assess whether your dog might pass the stuffing.

Is polyester stuffing safe for dogs?

Now that doesn’t mean you should go and let them eat the stuffing after they’ve shredded their new Christmas present! Polyester fiber fill can get stuck in your dog’s digestive tract and cause issues, so it’s best to dispose of the plastic viscera post-shredding.

Will my dog poop out stuffing?

If the stuffing does clog up your dog’s digestive system, the result can be fatal. It only takes a couple of days for the damage to be so severe that your dog might be unable to recover. If you suspect that your dog has eaten stuffing, the best thing to do is visit your vet immediately.