As a responsible breeder, it’s vital that you can identify when one of your newborn puppies needs your help. This includes telling if a newborn puppy is dying. Unlike with stillborn puppies, you still have a chance (however small) to save them.

During your litter’s first two weeks of life, the puppies are vulnerable to illness and stress since they are unable to regulate their bodies by themselves. This is especially true with a premature puppy. Very young puppies cannot regulate their own temperature, fluids, or energy balance. These factors make puppies vulnerable to death by a variety of causes.

Puppies who die soon after their birth are frequently termed as having “fading puppy syndrome.” The puppies lost to this syndrome may be born apparently normal but quickly decline over two to ten days, sometimes for no identifiable reason. If there is an underlying cause for the puppy’s decline, intervention is sometimes possible. If you notice the mother rejecting a weak puppy, such as the runt of the litter, you must jump in and nurse the rejected dogs yourself by hand.

If it doesn’t spring back into place promptly, the puppy is likely dehydrated. Under the vet’s advisement, you can try using a clean eyedropper to rub a bit of corn syrup on the puppies gums and then use an eyedropper to give him some water. You can also use puppy milk replacer.

Signs for Telling if a Newborn Puppy is Dying

Puppies who die soon after birth are frequently called “fading puppies.” There may be a known cause, but approximately 55% of puppies who are lost to this condition have no identifiable cause, so telling if a newborn puppy is dying is not always straightforward. There are four main causes of newborn puppy death.

These four factors are all intertwined; without managing one factor correctly, you will struggle to manage the others. The four problems to be aware of are low body temperature, dehydration, hypoglycemia (low blood sugar), and missing the “golden window” of colostrum intake.

Your newborn puppy is vulnerable to hypothermia. They rely on warmth provided by their mother in order to maintain their body temperature and should stay close during the first few days of life. However, if your puppy is struggling with fading puppy syndrome, they may separate themselves from their mother and littermates. This puts them at risk of hypothermia.

Rectal temperatures below 94°F are life-threatening for newborn puppies. A hypothermic puppy might feel cold to the touch and be lethargic. If your puppy is showing clear signs of hypothermia, it’s imperative that you act quickly. A healthy newborn pup can survive hypothermia if they are re-warmed gradually. It’s important to note that rapidly re-warming a puppy can result in death.

It is vital that your newborn puppy consumes enough milk during the first few days of life. One of the most common signs of fading puppy syndrome is the inability to suckle. If your newborn puppy is unable to suckle, they will quickly become dehydrated and malnourished. To add to this, puppies are unable to regulate their glucose, so prolonged intervals between feedings leave them at risk of hypoglycemia. Not only does this put them at greater risk of dehydration, but it complicates hypothermia as well. Having less water in your system hinders your body’s ability to regulate its own temperature, and for a puppy who can’t regulate it themselves already, this can be fatal.

Hypoglycemia is also known as having low blood sugar. Because puppies have limited fat reserves, cannot fully regulate their glucose, and have a high requirement for glucose, they are very vulnerable to hypoglycemia. A puppy’s glycogen reserves are quickly depleted after birth, leaving a newborn puppy in need of an early intake of nutrients. Unfortunately, this means that failure to nurse can lead to hypoglycemia by the time a puppy is just two days old. In addition, it is important to note that, if too hot or cold, a puppy cannot digest their food properly. This can also quickly lead to hypoglycemia.

Signs of hypoglycemia in puppies include loss of appetite, lethargy, trembling, weakness, and seizures. Your puppy may also have discolored gums and skin. Responsible breeders should proactively look for any signs of hypoglycemia in their litters. Death can occur within a few hours if hypoglycemia is severe. Getting enough sugar into your puppy is the only way to help a puppy in this state. You will need to give a dropper of sugar water every 15 to 20 minutes. Boil three tablespoons of water to one tablespoon of sugar and ensure that the mixture is warm, not cold. 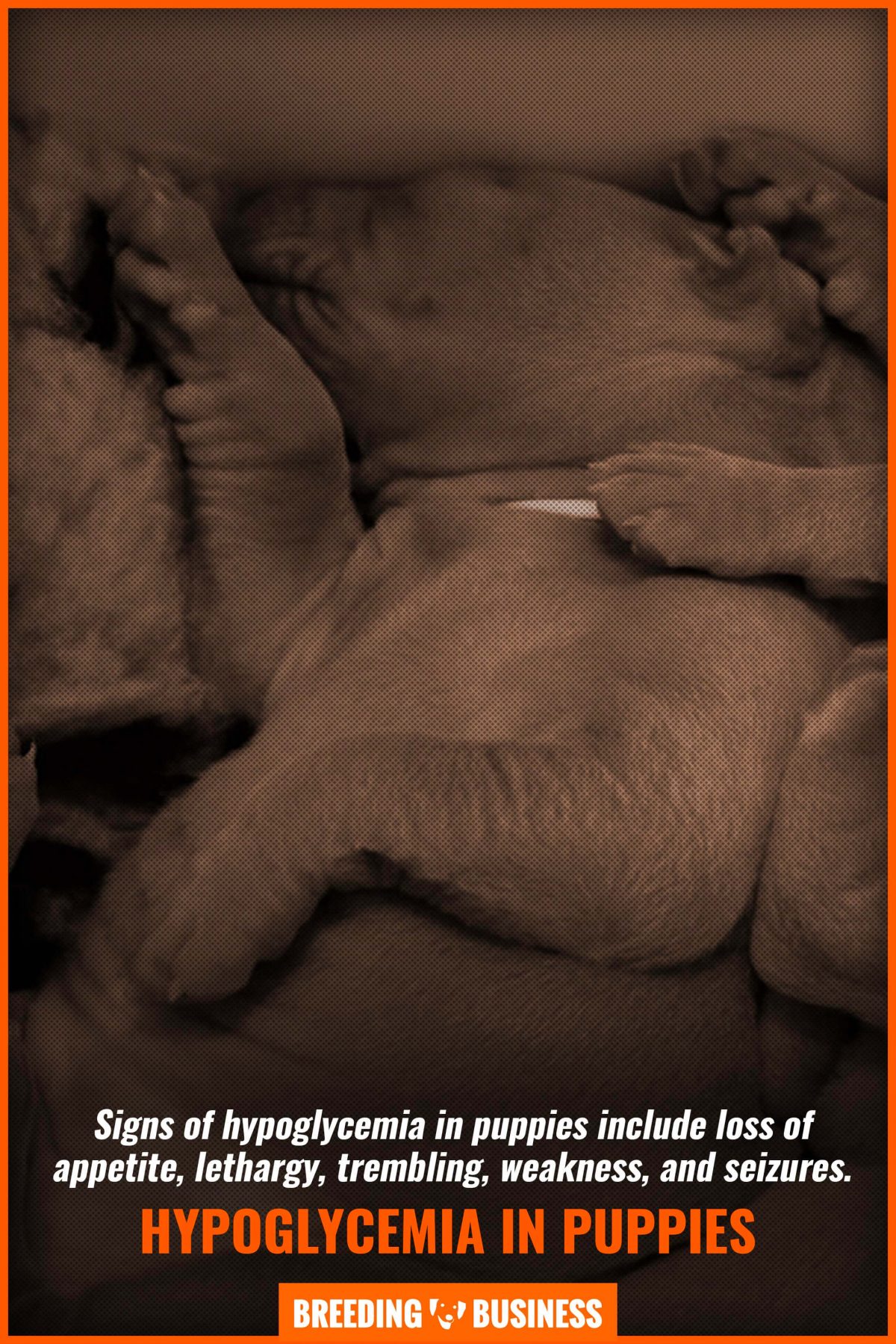 Colostrum is the milk that a bitch produces in the first few hours of whelping. This milk passes maternal antibodies to the litter. If consumed in time, the puppies will benefit from better immunity to a range of diseases. The flip side to this is that there is a time limit. Your newborn puppy’s intestinal walls will become unable to absorb colostrum within 12 hours. So, if your newborn puppy fails to nurse within this time frame, you will need to take action fast.

In 2014, Royal Canin studied the correlation between neonatal death rate and the number of antibodies the puppies had at two days old. Low antibody levels at this age are very strongly correlated with early death. This is because low antibody levels leave them vulnerable to routine viruses and bacteria to which puppies are exposed to in the birth canal or after birth. The most common culprits are E. Coli, Streptococcus, Staphylococcus, and Herpesvirus.

How do You Know if a Newborn Puppy is Dying?

The clinical signs of fading puppy syndrome are often vague. Many puppies with the syndrome, also called “faders”, are born apparently normal. They may be eager to suckle, seem strong, and behave normally. However, they may quickly begin to weaken, become restless, paddle their legs, and lose weight. One of the hallmark signs of fading puppy syndrome is “seagulling.” This is the name given to the weak, high-pitched cry of affected puppies. Faders are also known to stray away from their mother and littermates often. This rapid decline usually occurs between two to ten days after the pup’s birth.

You should monitor your litter’s weight, temperature, and behavior multiple times each day. This will allow you to catch any problems before they become severe. You can take a puppy’s temperature using a rectal thermometer. If your puppy’s temperature falls below 94°F it indicates hypothermia. Newborn puppies should also be weighed daily, preferably at the same time every day. Failure to gain weight is a big indicator that something is wrong with your puppy.

How do I hydrate my 1 week old puppy?

Puppies can be rehydrated in two ways: milk replacement and fluid therapy. Bottle feeding is the preferred method for milk replacement; however, the hole in the nipple must be large enough to allow the puppy to nurse with ease without being so large that the puppy can inhale rapidly moving formula.

How do you hydrate a dehydrated newborn puppy?

If he’s mildly dehydrated, you can give him hourly doses of an unflavored commercial electrolyte drink (Pedialyte) or add more water to his formula. For more severe cases, your vet may give him fluids under the skin, and address the underlying cause.

What is the fastest way to hydrate a newborn puppy?

Puppies can be rehydrated in two ways: milk replacement and fluid therapy. Bottle feeding is the preferred method for milk replacement; however, the hole in the nipple must be large enough to allow the puppy to nurse with ease without being so large that the puppy can inhale rapidly moving formula.

How do you know if a newborn puppy is dehydrated?

A dehydrated newborn puppy will have a dry mouth and sticky saliva. Their skin may also lose elasticity. In hydrated puppies, the skin quickly springs back into its original shape when pinched. When a puppy is dehydrated, the opposite happens.

Can you give a newborn puppy sugar water?

Most puppies that are weak at birth can be given a few droppers full of `sugar water´ which I suggest you make by getting uncolored Hummingbird Nectar and mixing it to make a strong syrup. (3 tablespoons water to 1 tablespoon sugar).