The American Pitbull Terrier, more commonly referred to as just the Pitbull, is a very misunderstood pup. And so is the Boerboel, who is much bigger and has a very large head! These poor pups have had a rough time when it comes to their reputation.

Although both of these dogs are quite intimidating in appearance, they are softer than most of us think! They also both make great four-legged family additions for the right family.

In this Pitbull vs. Boerboel breed comparison, we will compare both dogs against each other in every category. You’ll learn about their history and why they earned their feared reputation. You’ll also learn about their exercise and nutritional needs, as well as which dog is easier to train. So, don’t listen to the rumors. Let’s find out the truth about these dogs and how they compare against each other.

Breed history can tell us a lot about a dog’s personality and why they are the way that they are. It can also go a long way to explain why certain dogs have earned their reputation as being a mean dog breed. And that’s certainly true in the case of both of these pups. Let’s take a look. 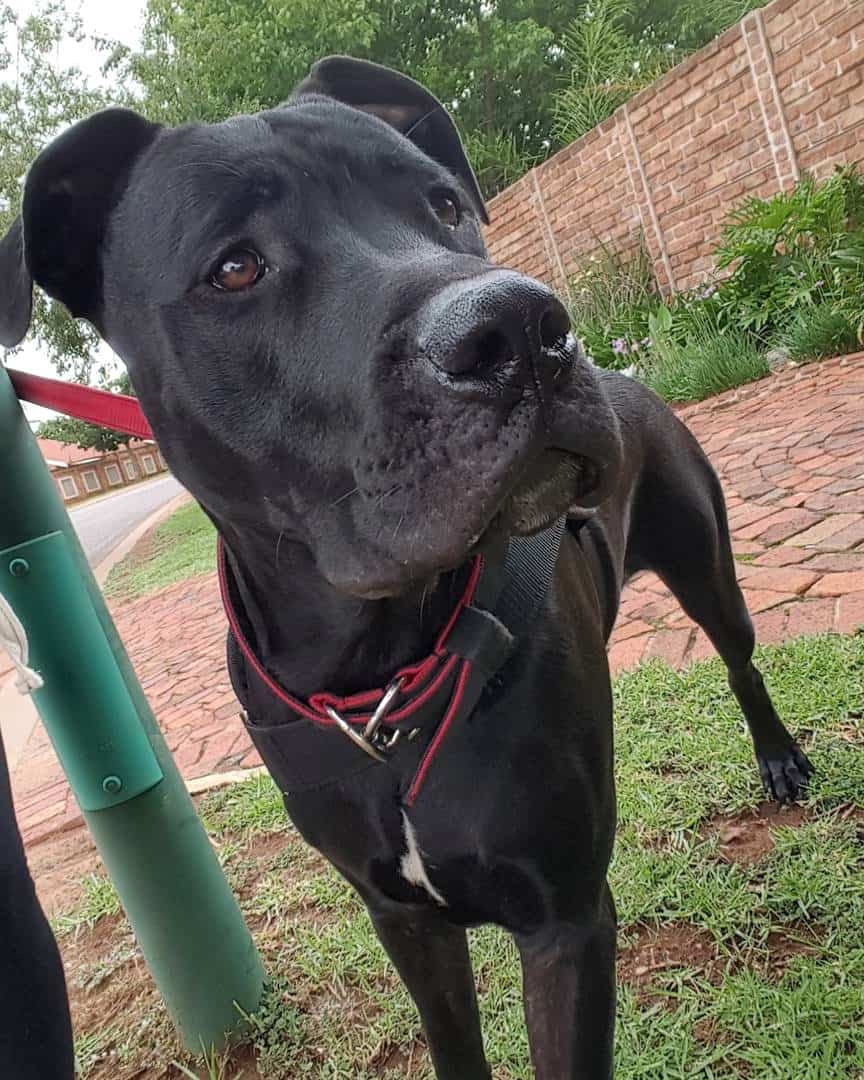 Since the Boerboel Pitbull mix is a mixed breed, its temperament can be unpredictable. Most of the time, its personality depends on who it takes after. And it can be hard to tell since the parent breeds don’t have a lot in common.

Generally, a Boerboel Pitbull mix is a social and affectionate dog. These dogs love getting attention from people and engaging in human interaction. In the house, it is most likely snuggled up with its family on the couch.

However, keep in mind that its parents have a history of aggression, so a Boerboel Pit may have a tendency to be more alert around strangers. Don’t worry, though, as this may be corrected through proper socialization.

The Boerboel Pitbull mix can get along with other pets, especially if they grow up together. However, due to its high prey drive, it can get aggressive with other canines, especially of the same sex.

Thanks to its Boerboel side, it is an effective guard dog. You can rely on these pooches in times of danger as they are highly protective of their family. It is a Boerboel Pitbull mix’s instinct to protect its loved ones from harm.

Your Boerboel Pit can be a good companion to kids. Its parent, Pitbulls, are referred to as “nanny dogs,” while Boerboels are known to be affectionate towards kids.

But keep in mind that the Boerboel Pit mix is a large dog that can knock over a kid by accident or when things get out of control. With that said, make sure also to teach kids how to safely interact with animals to avoid accidents.

Is A Boerboel Pitbull Mix Right For You?

We know that a pure bred boerboel can cost as much as ten times the price of a boerboel pitbull mix but that is because they really are an outstanding dog breed for protecting livestock.

Many of the people we see reaching out about owning a boerboel pitbull mix are only doing so after seeing cute looking puppies online and this is not the correct reason to add any dog breed to your family.

Neither the boerboel or the pitbull are ideal for first time dog owners and the unpredictability of a mix of the two breeds makes the task of owning one even more difficult.

That said though, if you do have experience of owning any type of mastiff, shepherd, large terrier or high energy large bulldog breed then you already have an idea of what you will be info with a boerboel pitbull mix.

Keep in mind though that all mastiff lines such as a purebred boerboel have been bred for strength and power for hundreds of years and adding in the unpredictability of a pitbull temperament can be a bad idea, even for an experienced dog owner.

What Is a Boerboel Pitbull Mix? 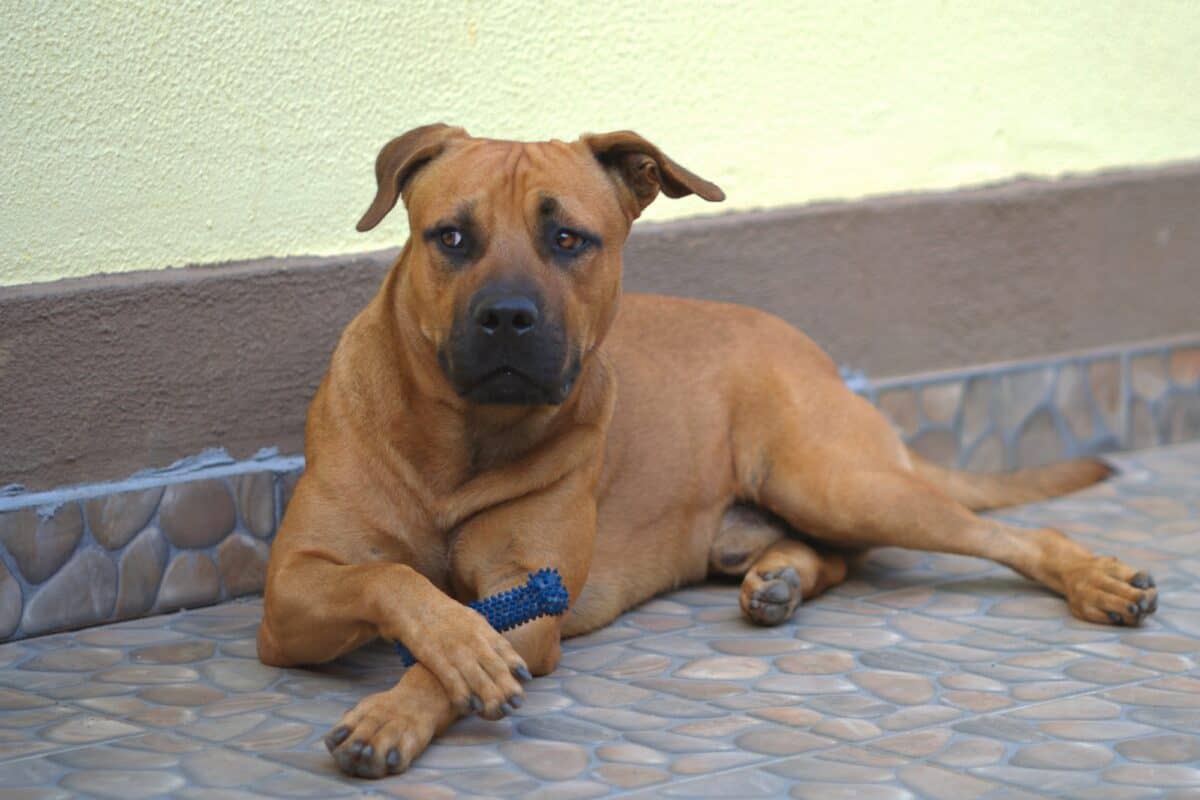 The Boerboel Pitbull mix is a cross between the Boerboel and any Pitbull-type breed, usually the American Pit Bull Terrier. Boerboel Pits are uncommon hybrids mainly due to the rarity of their Boerboel parents. This mix results in an energetic, loyal, protective, and playful dog.

If you’re looking for a lap dog, the Boerboel Pit is not the one you want. These hybrid dogs are highly active and industrious dogs that need a job to be happy.

Boerboel Pits can play many roles in your home — they can be watchdogs, guard dogs, home companions, or all three.

Owners of Boerboel Pits love them for their loyalty and affection. They may look tough and intimidating on the outside, but Boerboel Pits are absolute sweethearts! They can be great pets even for families with kids if trained well.

Because of their hybrid status, Boerboel Pitbull mixes are not recognized by the American Kennel Club (AKC). What this means for Boerboel Pit owners is that your dog does not conform to a breed standard.

In addition, your Boerboel Pit is also ineligible to participate in events organized by the AKC.

What is a Boerboel mixed with?

Description. The Boerboel Pit is not a purebred dog. It is a cross between the Boerboel and the Pit Bull Terrier. The best way to determine the temperament of a mixed breed is to look up all breeds in the cross and know you can get any combination of any of the characteristics found in either breed.

Is Pitbull bigger than Boerboel?

The modern Boerboel is most likely a mix of at least two or three breeds. Mastiff-type dogs from Europe, together with English breeds like Bulldogs and Bull Terriers may have also attributed to the breeding process.