If you want a breed that will stop people dead in their tracks out of fear, then either a Presa Canario or Pitbull is definitely the right breed for you. With large, broad heads and big, burly bodies, both of these canines have truly impressive appearances.

Both breeds can easily be mistaken for the other due to their strikingly similar appearances. However, the Presa Canario is much larger than the Pitbull, tipping the scale at almost double the Pit’s weight.

Both the Presa and the Pitbull have short, sleek, and shiny coats. But while Pitbulls are available in a wide array of different colors and coat patterns, the Presa Canario is only available in brown, silver, or gold. 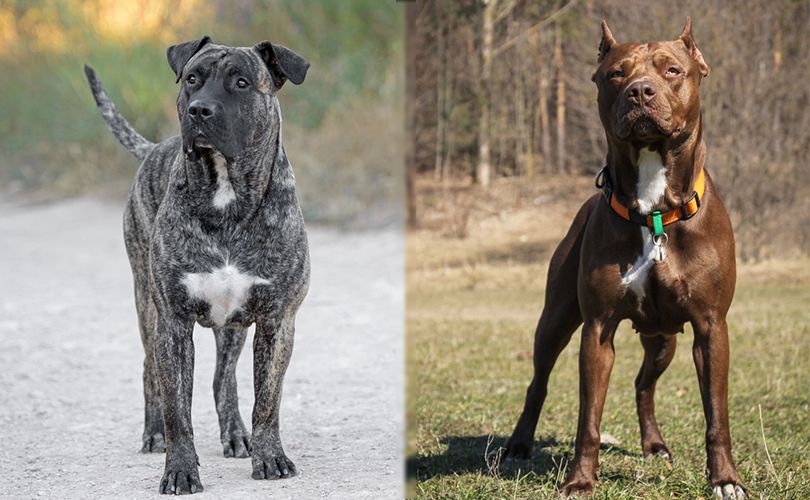 Both breeds have medium energy levels and will require at least 60 minutes of exercise every day. This can be divided into brisk walks or romps around in the backyard. While some indoor games are appropriate, you should never participate in a game that involves a challenge of power, including tug. Both the Pitbull and the Presa can see this as a battle for top dog rank within your family.

They have similar coats, in that they are both short and shiny, with the only difference being that the Presa is slightly more coarse to the touch than the Pitbull, whose coat is smoother. The Pitbull comes in any color you can think of, with the one exception of merle. The Presa also has a variety of colors, but not as wide-ranging as the Pitbull. He comes in various shades of brown, gold, and silver, the color ‘tiger’ is even on the list!

For the purpose of this article, the American Pitbull Terrier will be referred to as the Pitbull.

The Pitbull is one of four dogs who fall under the umbrella term ‘Pitbull’ that is used to describe breeds that descended from Terriers and Bulldogs. The Pitbull that we are comparing in this article is considered by the majority to be the original ‘Pitbull’, and often when people refer to a Pitbull dog they are referring to this guy.

If these guys aren’t exercised properly, then they will become easily bored and destructive. Powerful dogs such as these will create a lot of damage, so unless you can commit to exercising these guys adequately, then you really should consider another breed, as they need to expel that pent-up energy of theirs.

They are both prone to Elbow and Hip Dysplasia which is an abnormal formation in the joints that can cause painful arthritis. In addition to this joint problem, Panosteitis and Osteochondritis Dissecans and are commonly found in the Presa as he has a hefty amount of weight to carry on his average frame.

Is a Presa Canario same as a pitbull?

Which dog would win in a fight pitbull or Cane Corso?

We’ve already seen, based on bite force alone, that a Cane Corso is likely going to be stronger than a Pit Bull. But strength goes beyond the power of a dog’s jaw – you have to take into account their body as well. In this regard, the Cane Corso wins again!

Can a Presa Canario fight?

The Presa Canario was originally bred for fighting, guarding and some herding in Spain’s Canary Islands.