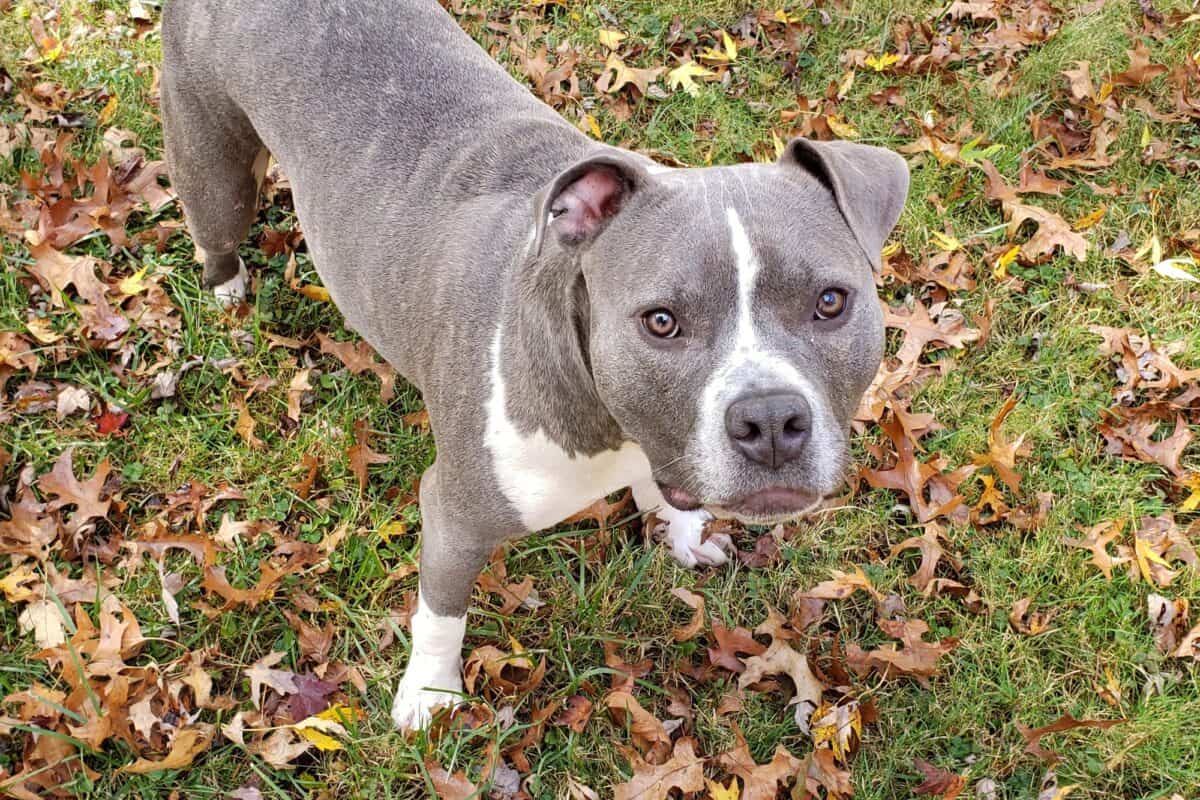 Both blue nose and red nose Pitbulls belong to the Pitbull dog breeds, so expect this mix to have the appearance of a regular Pit. That said, this mix will flaunt a stocky build with a short, smooth coat.

If this happens, blue nose red nose Pitbull pups will have a blue nose. To set your expectations straight, these puppies’ noses will never show up in sky blue hues but rather a blue, gray, or light black color.

As with their coats, puppies that take after its blue nose Pitbull parents will likely sport a dusky gray coat that verges on blue. There are also some with darker coats of dark grey or even shades of brown.

In addition, a streak of white along their chest and some white patterning around their nose is also likely to show up in their offspring that takes after the blue nose parent.

If you are hoping to have red nose dominant features in this mix, do not worry, as 25% of the offspring of this mix will be similar to its red nose Pitbull parent.

If a litter takes after its red nose parent, it will most likely have a copper coat matched with a copper nose and dark brown eyes. Their coats can vary in shades of copper.

Likewise, they commonly have reds, browns, and whites all over the body, similar to their red nose Pitbull parent.

Regardless of which parent it may take after, red nose blue nose Pitbull mixes will look like your average Pitbull but with a different color.

To see what a red nose blue nose Pitbull looks like, watch this video: Mixed blue and red nose pitbull in training

The red nose Pitbull and blue nose Pitbull both belong to the American Pit Bull Terrier breed, which makes them very similar. However, these two have some differences — their nose and coat color being the most noticeable.

Another notable difference between the two is their health condition. Red nose Pitbulls are generally healthy dogs. While they may be prone to hip dysplasia, there aren’t many genetic diseases linked to their color.

This isn’t the case for blue nose Pitbulls. Their coat and nose colors may be beautiful, but to achieve this, inbreeding was done in the process, which means that there may be a lot of health problems linked to this Pitbull variation.

Aside from the above-mentioned differences, both these Pitbull variations have the same height, weight, grooming needs, and temperament.

If you ask the general public, the term is often used to vaguely depict dogs who share similar characteristics such as a muscular, stocky body and a blocky head. If you ask journalists, the term is used to depict any large vicious dog who ends up injuring anybody and becomes worthy of being slapped on the local newspapers headline. If you ask the average dog owner, answers may vary widely. Even experts at times have a hard time defining what a pit bull truly is as the term has been heavily muddled and its true meaning still remains shrouded in ambiguity.

All this vagueness over the term has created quite some confusion, so much so that many dog breeds and even mutts are being mislabeled as pit bulls! To get a grasp of the idea, you can try a “find the pit bull” test online. It depicts dozens of dogs who are often confused for a pit bull. If you give the test a try, dont feel bad if you get it wrong; countless people require several attempts to get it right!

Pit bulls are not really a particular dog breed, but the term can be formally used to depict particular breeds.

Can a red nose pitbull have a blue nose?

Whether an American pit bull terrier has a red nose or a blue nose, he is still a pit bull, not a separate breed. Having a red or blue nose doesn’t mean the pit bull is rare, although some breeders may emphasize this and imply the coloring is a special type of pit. Beware of these breeders.

Is red nose and blue nose the bloodline?

No matter the nose color of the pit—red or blue—the pit bull is still a pit bull. There is no separate breed for either nose color, although there are different types of pit bull. The pit having either a red nose or a blue nose is not a sign of a rare color.

What do you call a red and blue nose pitbull?

Both Blue Nose and Red Noses are American Pit Bull Terriers; even the UKC breed standards reference that “the nose may be any color,” and, of the coat, “any color, color pattern, or combination of colors is acceptable, except for merle.”