From the wit of Wes Anderson, the man behind “Rushmore” (1998) and “The Royal Tenenbaums” (2001) comes a stop-motion animation gem that shares as much in common with Anderson’s other such project, “Fabulous Mr. Fox” (2009), as it is a total departure. There’s plenty more canines and perfectly orchestrated animation, and it takes place in a Japan some 20 years in the future and is loaded with small political powder kegs. 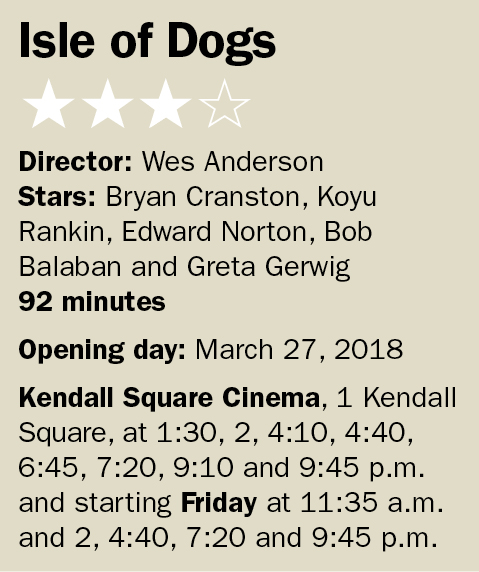 Co-written by Anderson, Roman Coppola, Jason Schwartzman and Kunichi Nomura, the action takes place in the aptly if generically named fictional city of Megasaki, where an outbreak of snout fever (dog flu) strikes and the metro’s Mayor Kobayashi (voiced by Nomura with abrupt, macho intonations suggestive of indelible Japanese cinematic icon Toshiro Mifune), banishes all dogs to a “trash island” where waste is carted by unmanned trams across the watery expanse and processed through a series of “Wall-E”-esque automation facilities. The result is an ever-rising mass of neatly stacked cubes of rubbish that take on the effect of tiered stadium seating. No humans, unless in hazmat suits, visit.

“Isle of Dogs” begins with a bit of lore that finds Kobayashi’s ancestors battling the four-legged beasts before reaching a truce in which dogs submit to domestication, getting some pretty nice perks as well as the label of “man’s best friend.” The Kobayashi clan, not-so-covert lovers of felines, maintain deep-seeded resentment – and snout fever, it turns out, presents a prime opportunity for some payback.The first pooch to go is Kobayashi’s own, Spots (Liev Schreiber), a short-haired Oceanic speckle-eared sport hound and guardian of an orphan boy blessed with the game name of Atari (Koyu Rankin). Young Atari, not so keen on the dismissal, steals a prop plane and, not surprisingly – as it’s unlikely a 12-year-old will be a licensed aviator – crash lands on the island. He spends much of the film with part of the propeller prop sticking out of his head. Neither this nor an ever-present trickle of blood deters the lad from searching for his dog, nor the waves of minions and robotic dogs sent by his uncle to bring him back, but Spots is hard to find. There’s even some doubt as to if he’s still alive, but Atari, aided by a pack of self-proclaimed “alpha males” led by mangy Chief (Bryan Cranston, perfectly gruff), remains resolute.

Anderson grants furry-footed cast members the ability to speak in English, while Atari and Kobayashi speak in their native tongue; we get Frances McDormand as a translator for the info we need to know. It’s a pretty seamless transition from the ever-deepening search for Spots to a student uprising led by an American exchange student (Greta Gerwig) with a billowy blond Afro and a team of scientists (Yoko Ono voicing the faithful assistant) working on a cure. Where it’s all going remains pleasantly murky and beside the point.

With the Parkland shooting so fresh and the national walkout movement in full swing, the student protest angle feels well-timed. Some may take exception that it’s an American leading the charge – and point taken, but keep in mind this is a Wes Anderson film, meant to be taken seriously but not too seriously. Anderson’s last outings, “The Grand Hotel Budapest” (2014) and “Moonlight Kingdom” (2012) were rapturously quirky ditties driven by character and gonzo goings-on more than they were sociopolitical statements. It’s about the journey and the fabric, and while you may discern undercurrents of Dreamers being excluded and other tactics of the Trump administration, “Isle of Dogs” is all Anderson, and proudly so. It walks like a dog, talks like a human and travels in the ennui of the disenfranchised.

Tom Meek is a writer living in Cambridge. His reviews, essays, short stories and articles have appeared in the WBUR ARTery, The Boston Phoenix, The Boston Globe, The Rumpus, The Charleston City Paper and SLAB literary journal. Tom is also a member of the Boston Society of Film Critics and rides his bike everywhere.

Share All sharing options for: A Ranking of All the Dogs in ‘Isle of Dogs’

But no, we’re not going to talk about any of that stuff. I’m not a movie expert. Go read some of my very good colleagues for the appropriate movie analysis. I am a dog expert, and this is a movie that features a variety of good dogs. (Isle of Dogs sounds like “I love dogs”—get it?) Here is a ranking of the film’s canine characters, all of whom are good. (Warning: There are mild dog-related spoilers below.)

Spots is an outrageously good dog. A short-haired Oceanic speckle-eared sport hound, Spots has a dalmatian-esque coat, a pink nose, and the bluest eyes in the world—eyes which, as we learn, are capable of producing actual tears when Spots is overcome with love.

Spots’s relationship with his master, Atari, drives the film’s plot. He used to be the bodyguard for Atari, the orphaned nephew of the evil, cat-loving mayor. He is highly trained, and, as it is eventually revealed, slightly bionic, but what makes him an excellent bodyguard is that he is an excellent dog, and therefore is incapable of keeping his professional relationship with his master strictly professional. “I’m not supposed to be his friend,” Spots admits, “but I love him very much.”

But the mayor decides to exile every dog to nearby Trash Island—you get most of what you need to know about Trash Island from the name. When the decree is stamped, Spots is the first ordered to go, to make him an example. He sits quietly in his cage, awaiting his next order as he is shipped off to die on an island of garbage. Atari is the only master who makes an effort to go to Trash Island to rescue his beloved pet—and rightfully so, as Spots is a fantastic dog.

I want to congratulate whoever decided to have Tilda Swinton voice a pug. It is delightful to hear such a dignified voice boom from such a doofy dog. I recommend this “cast interviews” video, in which the words of the actors are spoken by their animated characters. Swinton sagely intones “the heart of a dog is a bottomless thing,” at which point the pug acts like a pug.

Oracle is the only small dog in the film—one would imagine that, forced to fight for survival on Trash Island, the chihuahuas and shih tzus did not last very long. However, she has gained the reverence of her fellow pups through her ability to see the future—an ability that, unbeknownst to the other dogs, stems entirely from the fact she knows how to watch television. She spends most of her time watching game shows as the life-or-death plot of the film carries on around her.

Without spoiling the plot, I’d like to let you know that at some point during the movie, a litter of perfect, beautiful puppies is born. They don’t speak, or really do anything beside nurse from their mother, but being able to speak or do things has never been part of the grading criteria for puppies.

Duke is a husky-like dog, part of a five-strong pack of alpha males that helps Atari find Spots. He is perpetually aware of various “rumors” that he’s heard from other dogs that help guide the pack safely on its journey.

Jeff Goldblum is one of the world’s best people, but even great people are worse than dogs. However, a husky that has the personality and voice of Jeff Goldblum is a particularly great dog.

Gondo is introduced as the fearsome leader of a pack of cannibal dogs; with huge fangs and a Two-Face vibe (one half of his face has fur and a blue eye, the other half is bare skin with a red eye), it’s easy to believe. But when accused of cannibalism, Gondo breaks down, revealing that his pack turned to cannibalism only once, and that the dog they ate, Fuzzball, was comatose. The pack only ate Fuzzball to survive and to put him out of his misery. Gondo howls plaintively, which means somewhere on earth, there is probably footage of Harvey Keitel standing at a microphone and howling plaintively.

Igor has no speaking lines; he is the leader of a rival pack of white dogs that gets into a scrap with the main pack early in the film. In the heat of the fight, his right ear is ripped off of his head by Chief, the best fighter of the bunch. “Sheesh, Igor,” one of the white dogs says when the fight is done, “I think he chewed your ear off!” Igor looks up at the bloody corner of his head where he used to have an ear, shrugs, and disappears, never to be seen again.

Spoiler alert: They were all very good boys and girls

Who voices spots in Isle of Dogs?

Spots is Atari’s dog who is the first canine sent to Trash Island as part of Mayor Kobayashi’s deportment initiative.

What are the dogs names in Isle of Dogs?

Spots (Liev Schreiber) Spots is an outrageously good dog. A short-haired Oceanic speckle-eared sport hound, Spots has a dalmatian-esque coat, a pink nose, and the bluest eyes in the world—eyes which, as we learn, are capable of producing actual tears when Spots is overcome with love.

What breed is boss from Isle of Dogs?

Appearance in the film. Chief was one of many stray dogs that were transferred from Megasaki City, Japan to Trash Island. There he befriended 4 house-pet dogs named Rex, King, Duke, and Boss. Since he lived most of his life as a stray, Chief was used to the conditions, unlike his friends.