We frequently get asked “When should I take my puppy to get groomed for the first time?” and “What type of haircut should I ask for to get the perfect teddy bear look?” Since we are not professionals when it comes to grooming we thought we would ask someone who is. We interviewed our grooming artist, TeAnna who is the owner of Ruffledales Pet Resort & Paw Spa and asked her several of those questions.

How often do you need to give your Poodle a teddy bear cut?

If you want your pup to always look freshly groomed, plan to give him a cut every 4 weeks. If you do not mind a bit of a grown-out look, then every 6-8 weeks will also be sufficient. (You can start trimming your Poodle puppy when they are young – this way they’ll get used to it and easily accept the grooming)

In the beginning you should aim to clip less hair and go slowly. Many owners initially cut off too much hair and are upset that their dog does not look like they envisioned.

Of course, that does not mean that you do not need to brush your pup in between. A Poodle or Doodle with a teddy bear cut should be brushed at least 2-3 times a week. If your dog spends a lot of time outside with you or plays wildly with other dogs, you should brush him every day. 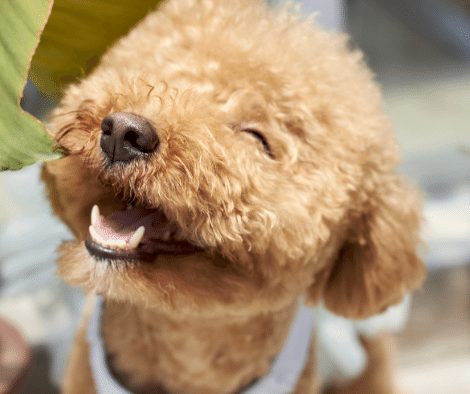 What is a Poodle Teddy Bear Cut?

Poodles have been groomed in a variety of ways ever since they became a popular companion and show dog. Poodles originally were hard-working water retrievers and their curly coat was kept short and easy to maintain for hunters. Nobody had time to brush out their Poodle after a long day of duck hunting!

Nowadays they rarely work in their original breed’s purpose anymore. Instead, they are beloved companions and show animals. We have time and resources to make them look as cute or fancy as we like!

The teddy bear cut is a Poodle or Doodle cut in which the hair is kept at about 1-2 inches long at all parts of the dog’s body, including the face. Traditional Poodle cuts have the face shaved closely to the skin. If shaved, the face looks more serious, regal and show-dog like.

In the teddy bear cut however, the hair on the face is left at the same length as on the rest of the body. This softens the face of the dog and makes him look puppy-like – or like a teddy bear. Skilled groomers will be able to shape the coat in a way that it looks very even and smooth and the dog appears to have round features, just like a teddy bear.

These terms refer to shaving the hair away from the groin and genitals, including the rectum, for sanitary reasons.

A maternity cut involves shaving the entire belly, from the armpits to the groin, to expose all of a female dogs nipples. This makes it easier to nurse puppies and will assist the mother in keeping herself a little cleaner.

My favorite top knot to do! I call this the pom-pom top knot. I use my Greyhound comb to gather the hair, use rubberbands for braces to hold hair, then put in bows afterwards.

This is the hair on the top of the head. We usually only refer to it as a top knot if we are talking about a poofy poodle style or when putting a bow in the hair of a long-haired dog such as a Yorkie or Shih Tzu.

What is the difference between a puppy cut and a teddy bear cut?

A teddy bear trim or teddy bear head usually describes a rounded, fluffy shape to the top of the head or entire face, so tends to be less confusing, although that also varies in style and length to suit the dog’s size, head shape and coat, and how you want the ears to be.

How do you do a bear cut on a dog?

Teddy bear cuts are similar to puppy cuts in that they involve an even cut around the whole body. The only difference is that they’re geared more towards curly-haired dogs like Poodles, Labradoodles, Goldendoodles, and any other -oodle you can think of!

How do you give a dog a teddy bear face?

Teddy bear cuts are similar to puppy cuts in that they involve an even cut around the whole body. The only difference is that they’re geared more towards curly-haired dogs like Poodles, Labradoodles, Goldendoodles, and any other -oodle you can think of!