Goldendoodles are known for their beautiful coats. Often gorgeously golden in color with curly locks, the coat is one of the distinguishing features of this breed.

And it’s this teddy bear appearance that has made the Goldendoodle so popular in recent years.

And all that fur means that pet owners worldwide have got creative when styling their precious pups. From the classic puppy cut to the intricate lion cut, there is no shortage of ways you can trim your Goldendoodle.

In this article, we will take a look at some of the most popular Goldendoodle haircuts around while also giving you some tips and tricks on how you can keep your pet’s coat looking stylish and feeling fantastic.

If you break down their name, you’ll quickly realize that these dogs are a cross between the popular Golden Retriever and the adorable Poodle.

As a result of their hypoallergenic, non-shedding coats, Poodle mix breeds became very popular in the 1990s.

Labradoodles were one of the first Poodle crosses that became popular, developed in 1988 by an Australian breeder who needed a dog suitable for blind people suffering from allergies.

Since that, many other breeds of Doodles have been developed to follow the success of the Australian Labradoodle, including the Schnoodle, Bernedoodle, and Sheepadoodle. And, of course, the Goldendoodle.

The coat length of your Goldendoodle will primarily depend on what generation cross your dog is. The most common types of Goldendoodle include F1 and F1B dogs.

F1 Goldendoodle dogs are first-generation crosses, meaning they are the puppies of a purebred Poodle and purebred Golden Retriever.

The coat of these dogs could resemble either of its parents and is typically longer and more wavy or shaggy rather than tightly curled like the Poodle’s coat.

On the other hand, F1B Goldendoodle generation dogs are backcrosses, meaning they have one purebred parent and one crossbreed.

This means that they likely contain more Poodle genetics and will have the shorter, non-shedding, curly coat of this breed.

The puppy cut versus the teddy bear Goldendoodle cut

Now that we’ve covered the difference between the “teddy bear haircut” and the “teddy bear Goldendoodle,” let’s talk puppy cut and teddy bear cut. Here’s where things get messy. It’s like the old saying, “You say tom-A-to, I say tom-AH-to.”

Rather than get caught up in the terminology debate, I’m sharing the overarching principles that I use to achieve the Goldendoodle teddy bear look.

Did you know that “teddy bear” is used to describe both the dog and the haircut? 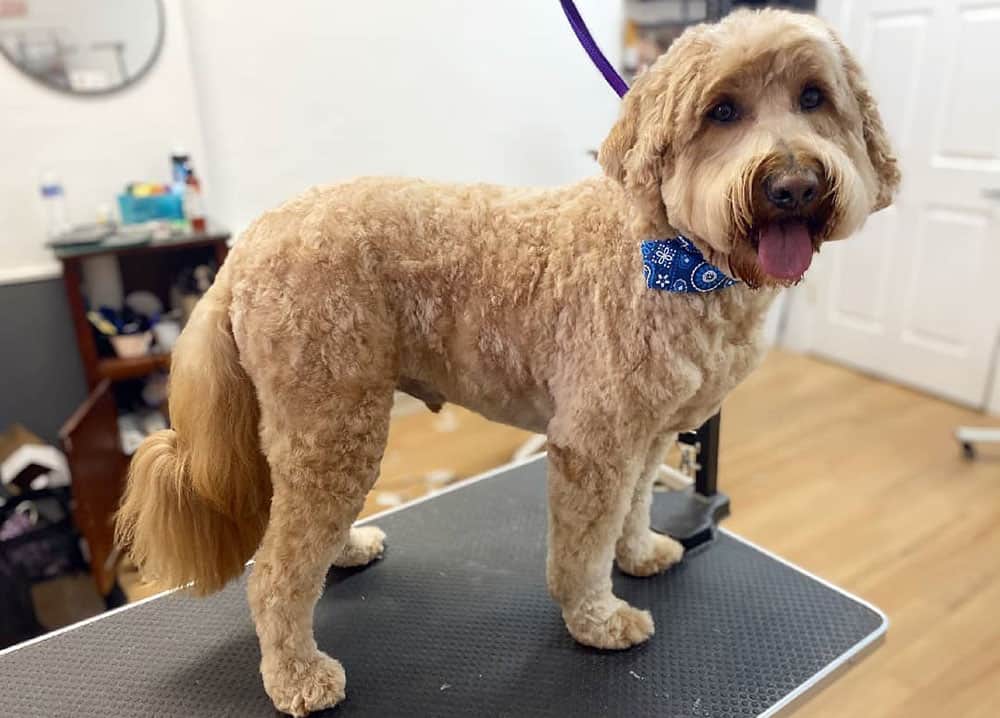 Goldendoodles should be taken to the groomer every couple of months while they also need daily brushing, particularly of the longer, fluffier parts of their coat.

When introducing the brush to your Goldendoodle puppy, be sure to do so slowly, so he gets used to the tool and the process, as you don’t want to have a daily fight with your dog.

You may want to initially give him some treats during brushing, so he sees the experience as a positive one.

How do you cut a Goldendoodle teddy bear face?

However, the look that I think is heart-stopping (and probably the most often associated with the Goldendoodle) is the teddy bear cut. This haircut has all the features of the classic teddy bear stuffed animal from our childhood days—the round face, button eyes, big bear paws, and the stuffed-with-fluff body.

What is the difference between a puppy cut and a teddy bear cut?

How to get the Teddy Bear haircut on a Goldendoodle?