Beethoven is undoubtedly one of the most popular and heartwarming dog movies of all time. Released in 1992, this fun family movie follows the story of Beethoven, a purebred Saint Bernard that made his way into the Newton family and filled their home with love and lots of antics.

Saint Bernards were already an impressive and distinct dog breed, but Beethoven really put them in the spotlight and brought attention to these loveable gentle giants. We’ll give you a sneak peek into what makes this dog breed so incredible and give a brief synopsis of the movie if you haven’t seen it already.

French Mastiffs have been around for a very long time, having the reputation as one of the oldest French breeds of dogs. In some areas, these dogs are called Bordeaux Bulldogs because of their facial similarities with the mentioned breed. French Mastiffs can weigh up to 65.2 kilograms and grow as tall as 69 centimeters in height.

This breed is not exactly friendly to strangers, being confrontational most of the time, but their loyalty to their master and family is strong. This trait makes the breed a highly bankable guard dog. No inexperienced or first-time dog owners should consider having this breed as their first, as it takes some skill to raise it properly.

They are observed to commonly suffer from epilepsy and heart problems but can reach up to 10–12 years in a healthy condition.

It takes a firm master to control a Bullmastiff effectively. They can be particular to the tone and timbre of the voice, so an assertive resonance might be required. One of the most alert guard dogs, Bullmastiffs do not necessarily attack immediately but may just pin and trap an intruder or enemy down. It is very important that at a young age, Bullmastiffs are trained to socialize with strangers and other dogs.

Prone to cancer and different types of tumors, a Bullmastiff is expected to live under ten years.

A Caucasian Shepard is the largest dog. They can stand when on their hind legs at 6 feet takl

We have a newfoundland and are totally in love with the breed. Ive enjoyed getting to meet most of these large breeds and find them magnificient!

How could you possibly forget Great Pyrenees? This is a wonderful breed (that from a golden retriever owner for 30 years), very loving, silly and majestic. Very much like a newfoundland. As a matter of fact, a newffie is a cross between, a pyrenees and a mastiff.

I love reading about all of these large, lovable animals.

St. Bernard: a Short History of the Breed

Many people associate these dogs with the Swiss Alps, and for good reason. These beautiful dogs do actually come from Switzerland, in an area near the Great St. Bernard Pass, which links Italy and Switzerland.

The history of the St. Bernard dog breed goes back to the late 1600s to this part of Switzerland, when they were used as watch dogs to go out and protect against marauders. The St. Bernard pass was a frequent pilgr route for those traveling to Rome. The dogs were also used as rescue dogs in the mountains.

In 1855, one of the dogs was sold to a Mr. Klopfenstein, who lived in Neuenegg. This man then sold the dog to Heinrich Schumacher that same year. The dog was named Barry I, and he became a stud dog for Schumacher’s kennel. By 1862, Schumacher began shipping the dogs to England, Russia and the U.S. Charles Grodin, Dean Jones, Bonnie Hunt and George Newton are all famous people who own a St. Bernard.

Should You Get a Saint Bernard? 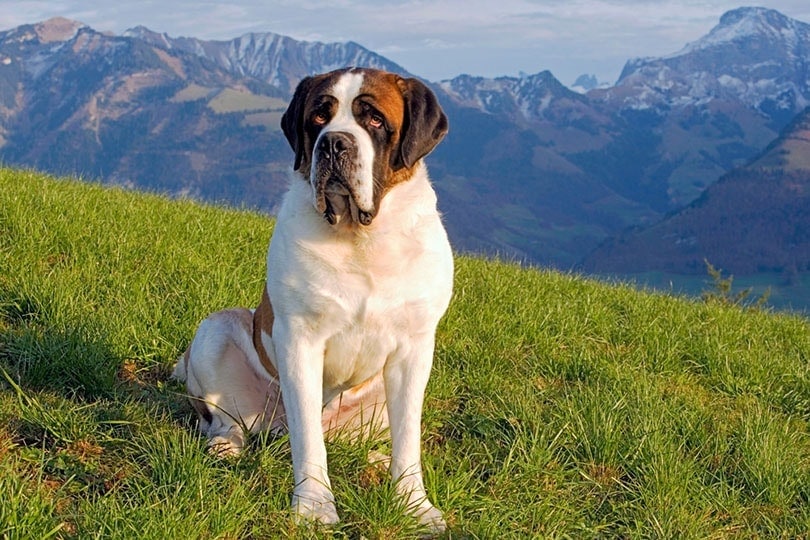 If you’re thinking of getting a Saint Bernard but wonder if it’s the right breed for you, we’re here to help! We will touch on some important topics to consider so you can figure out if a Saint Bernard is right for you.

First and foremost, a Saint Bernard is a large dog, which means it needs some space. If you live in a small apartment in the city, you probably shouldn’t get a big dog at all but instead opt for a smaller apartment-sized dog.

Even though Saint Bernards don’t need lots of room to roam, they do need some space, making a fenced-in backyard an ideal place for this big breed to feel right at home.

You should know that Saint Bernards shed and drool a lot. If you don’t mind having dog slobber on everything and you’re OK with vacuuming up dog hair, then you’d be able to handle owning a Saint Bernard.

Because of its size, a Saint Bernard must be trained early in life. Dog training requires some work and lots of consistency on your part. However, you don’t need any special skills to teach a dog a few simple rules of behavior. If you can’t dedicate yourself to training a dog, then you should think twice about welcoming a Saint Bernard into your life.

Is the Beethoven dog still alive?

The original dog playing Beethoven was only in the first two movies. He is no longer alive but some of the dogs in the later films likely are. His real name was Chris, owned and trained by Karl Lewis Miller who also trained animals for Cujo, K-9, Babe, and many others.

Is the St. Bernard the biggest dog?

Bernards weigh between 63 and 100 kilograms (140 and 220 pounds) on average, and stand anywhere from 70 to 90 centimetres (27 to 35 inches) tall. A St. Bernard named Benedictine holds the world record for the Heaviest Dog Ever.

How much is a St. Bernard dog?

The Dog Behind The Role

The much loved titular star of the first two films was the 90kg St Bernard, Chris. Teresa Miller, one of his trainers, described him as enjoying “being lazy and drooly and hanging around the house”.