If you have ever watched a male and female dog mate, you may have become worried or even confused at the point where the two dogs appeared to get “stuck” together. But is getting stuck a bad thing? Is it dangerous? Should we intervene?

During mating, a male and female dog get stuck together in what is called the “copulatory tie” or “lock”. The “copulatory tie” occurs when the bulbus glandis, an erectile tissue structure located at the base of a male dog’s penis, engorges with blood. This happens just after the male inserts his penis into the female’s vagina and he begins to thrust. The bulbus glandis swells quickly and forms a spherical enlargement, twice the diameter of the shaft of the penis. The circular muscles located just inside the female’s vagina, called the constrictor vestibuli muscles, contract against the bulbus glandis, completing the lock and preventing the penis from being withdrawn. The two dogs are now tied together.

Normal mating behavior in dogs begins with the male dog sniffing a female dog that is in heat. If the female is receptive, she will present her hindquarters to him, stand still, and hold or “flag” her tail to the side. The male dog will proceed to mount the female, hold onto either side of her back with his forelimbs, insert his penis into her vagina, and begin to thrust. During this phase, the male dog also ejaculates the pre-sperm fraction of his ejaculate. It is at this time that the “copulatory tie” happens — the bulbus glandis enlarges and the female’s vaginal muscles clamp around the bulbus glandis, preventing the penis from being withdrawn. The dog stops thrusting as soon as the “copulatory tie” is achieved and then ejaculates the sperm-rich fraction of his ejaculate. With their genital organs still locked together, the male dog will dismount and turn 180 degrees, which will result in the male and female facing in opposite directions. The male dog will then ejaculate the post-sperm fraction of his ejaculate over the next 5 to 30 minutes while continuing to stay locked with the female.

Why Do Dogs Get Stuck During Mating?

Dogs get stuck during mating because of a process called a copulatory tie. It is also one of the main stages in the process of intercourse.

The male dog has an organ called the bulbus glandis, which is responsible for keeping him tied up with the female. The dog breeding tie basically keeps the semen secured inside the female dog. The bulbus glandis expands and gets locked in the uterus, and the female dog gets higher chances of getting puppies.

The tie is extremely common but as opposed to common misconceptions, not a strict requirement for pregnancy as such. 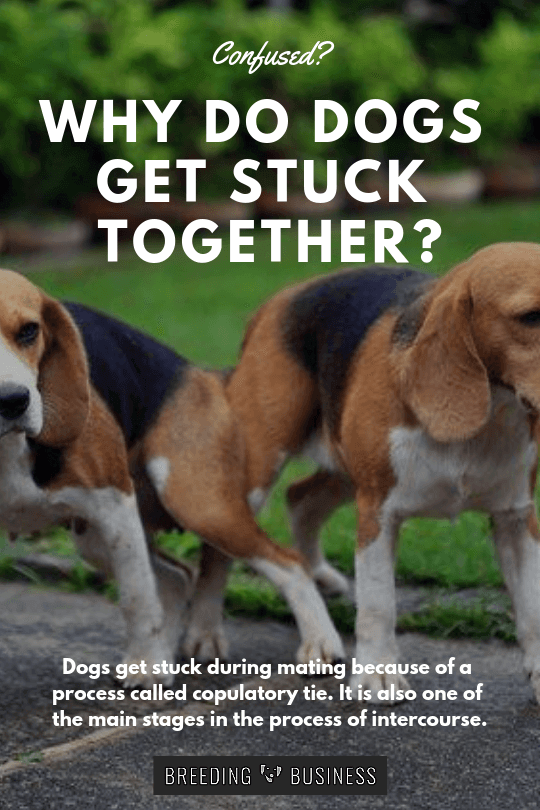 What Is The Purpose Of The Copulatory Tie?

The purpose of the copulatory tie is to keep the male and female joined together during and after ejaculation. This traps the semen inside of the female and increases the chances that the male’s sperm will successfully fertilize the female’s eggs. On average, female dogs only go into heat every 6 months, so this strategy helps maximize the chances that conception will occur and the female will produce a litter of puppies.

Does a Copulatory Tie Mean My Dog Is Pregnant?

As with people and other animals, when two dogs mate, it does not always result in pregnancy. Separating dogs that are stuck together during mating will not prevent pregnancy. Contrary to popular belief, it is not necessary for a copulatory tie to occur for a dog to become pregnant, although the tie does increase the chances of conception. The best way to prevent pregnancy in a female dog is to sterilize her. During this procedure, the female dog’s uterus and ovaries are surgically removed to prevent future pregnancies. This procedure is known as a spay or an ovariohysterectomy.

If your unspayed female dog accidentally mates with another dog, there are mismating injections that can be administered by your veterinarian within one to two days after mating. Unfortunately, these injections do carry risks and shouldn’t be given too often.

Why do dogs stuck during mating?

During intercourse, a part of the male dog’s penis called the bulbis glandis swells and prevents him from pulling out. Essentially, the pair are locked together until the swelling subsides. “Unlike cats who are fertile every 21 days, dogs only come into heat twice a year.

How long do dogs stay stuck together?

How Long Do Dogs Stay Stuck Together After Breeding? Dogs remain stuck together at the end-stage of mating for five to 45 minutes, says Greer. The male dog dismounts and ends up rear-to-rear with the female. Dogs new to mating may experience a bit of anxiety at being locked together, but it’s a natural process.

What to Do When dogs get stuck after mating?

The best and only thing that you can do is stay calm and wait it out. Given time, your dogs will separate themselves and be no worse for wear. If the tie lasts for longer than 20 minutes, try to relax the female dog by petting her. Otherwise, don’t try to get involved.

Do dogs get stuck every time they mate?

During ejaculation, the sperm and prostatic fluid are released into the female dog, traveling up her reproductive tract. After the dog’s mate, the male dismounts, and they remain stuck, with the male’s penis still inside the female.