Joe and Teresa Graedon answer questions, comments and suggestions sent in to them by fans of the People’s Pharmacy. Here are a few bits of advice on how to help with your pets:

I Iive in “the bird dog capital of the world,” where a common add-in to dog food is a sprinkling of garlic powder to repel fleas, ticks and mosquitoes. It seems to work, as many handlers and kennels do not give the dogs a flea and tick treatment before going into the field trials.

Readers of this column have been recommending garlic to combat fleas for years. Then we received this message: “I heard that garlic could keep fleas from biting, so I put some in my dog’s food for about a week. He became lethargic and couldn’t even climb the lowest stairs. My vet said that garlic is toxic to dogs. It causes something called Heinz body anemia. Please warn other readers.”

Veterinarians tell us that garlic does not protect dogs from fleas or ticks. They have found, however, that garlic and onions may cause dangerous anemia in dogs (Journal of Veterinary Medical Science, April 2010). It is not worth the risk.

I heard on your radio program about eating coconut macaroons to help with irritable bowel syndrome. Our dog was having trouble with recurrent bouts of diarrhea, and the vet could not find a reason.

I gave her coconut flakes twice a day, and it worked great. So this remedy also seems to work for dogs with sensitive digestive systems.

We have heard from many readers who have found that coconut helps to quell diarrhea. We first heard about this remedy from Donald Agar, who used Archway coconut macaroons to treat diarrhea from Crohn’s disease. Others have found that plain shredded coconut works just as well.

Although we could find no scientific support for the use of coconut to stop diarrhea, it is used in some traditional medical systems (Journal of Ethnopharmacology online, Nov. 23, 2012).

Several years ago, a vet suggested giving our dog Metamucil (psyllium fiber) to prevent chronic diarrhea. I, too, experienced chronic diarrhea because of food allergies. Because our dog had such good results, my wife suggested that Metamucil might help me. To my surprise, it was virtually a miracle.

When he learned of my experience, my son (associate dean of a pharmacy school) tested Metamucil to minimize his own chronic problem with diarrhea and found it beneficial.

Although most people think of Metamucil to counteract constipation, it also can be helpful against some types of diarrhea.

Our Westie has cleared up my athlete’s foot completely. The sensation was a little odd at first as the dog licked both my feet. Still, it’s better than suffering with this fungal infection. This worked better than the creams and potions I’ve bought through the years. Has anyone else ever had this experience?

Dog lovers have written in from time to time with testimonials like yours. The first one we received stated: “My uncle had his athlete’s foot cured by his small terrier dog back in the ‘50s. When my uncle came home in the evenings, he would remove his shoes and socks and put his feet on a hassock while reading the paper. The dog always went to him immediately and licked his feet all over, especially between the toes. After about three months, he noticed that the athlete’s foot, which had plagued him for most of his adult life, had gone away!”

But other readers were not amused by this form of treatment. Although dog saliva may have some anti-fungal properties, dogs often carry a variety of bacteria in their mouths, which could be a problem if saliva got on broken skin.

A vet tech added: “Not only is this ‘treatment’ ridiculous, it could be dangerous to your pet! Dogs and cats can get fungal infections from human carriers. Not only that, but they can also transfer the same fungi back to you, other people and other pets.

“Treating pets for fungal infections can be costly and time-consuming. If you love your furry friend and want to keep him/her healthy, please don’t recommend this remedy.”

After reading that potassium nitrate in sensitivity-preventing toothpaste could help with asthma and cat allergies, I tried it. I checked with my dentist first and got the OK.

I frequently used to have some type of cold or allergies, but in the two years since I started, I’ve not had either. I don’t know of anything else that could be responsible, and it is certainly a simple change to make.

The potassium nitrate found in some products for sensitive teeth was once used as an asthma treatment. Some other readers have also found it helpful against allergy symptoms.

I want to thank you for a recent tip on using Crest Sensitivity Toothpaste to help with allergies. My daughter always needs to use her inhaler frequently when she comes home from college, due to cat allergies. This past weekend, she didn’t need the inhaler one single time. She started using the toothpaste two weeks ago.

Thanks for sharing her experience. A caller on our radio show told us that Crest Sensitivity Toothpaste had helped his asthma. We found this fascinating but surprising. The active ingredient is potassium nitrate, a compound that was used to treat asthma and arthritis a century ago. Although it is unlikely there is enough in toothpaste to have a pharmacological effect, your daughter is not the only one to report benefit.

Boudreaux’s Butt Paste caught my eye in your column about diaper rash. Our beagle Buddy was bruising his nose, grinding it to the quick as he went about burying treats, small toys and other objects in some hidden nook of the carpet. He pushed and pushed outward with his nose, rubbing it raw.

Our veterinarian suggested Boudreaux’s Butt Paste, and we thought he was putting us on. Almost embarrassed to ask, I went into our drugstore and whispered the name of the product. “Sure, right up here,” said the pharmacist as he reached to the top shelf for a tube of it. It worked! It’s heavy enough that even constant licking kept it in place long enough for Buddy’s nose to heal.

Boudreaux’s Butt Paste is a diaper-rash ointment that contains zinc oxide. Our veterinary consultant confirmed that veterinarians sometimes recommend this type of ointment for a dog with a sore, raw nose like Buddy’s. She cautions, however, that a zinc-oxide product should be used for a short period of time and not in large quantities. Dogs do lick their noses frequently, and zinc oxide can be toxic if they ingest too much of it.

Dogs probably lick feet with athlete’s foot because they enjoy doing it. It most likely tastes salty and sweaty and, being the type of animals that they are, this smelly stuff will be appealing. If you have athlete’s foot though, using your dog as a cure is probably not the best option.

They get information about your pheromones.

A sense of smell is your dog’s dominant sense, so they love to sniff EVERYTHING, but did you know that by smelling and licking something, they can gather important information?

Humans release pheromones from all over their bodies, especially their private organs, which is why your pup may sometimes stick their nose in your cooch. But why the feet?

They might not even be licking your feet because of the athlete’s foot; they could be investigating what they find to be essential information.

Sniffing and licking something can tell them if you are stressed out, anxious, or even how healthy or ill you are.

Dogs are man’s best friends, so their interrogation isn’t meant to annoy you. They may just be seeking a whiff of your pheromones, and licking them gives them more information about your current state. 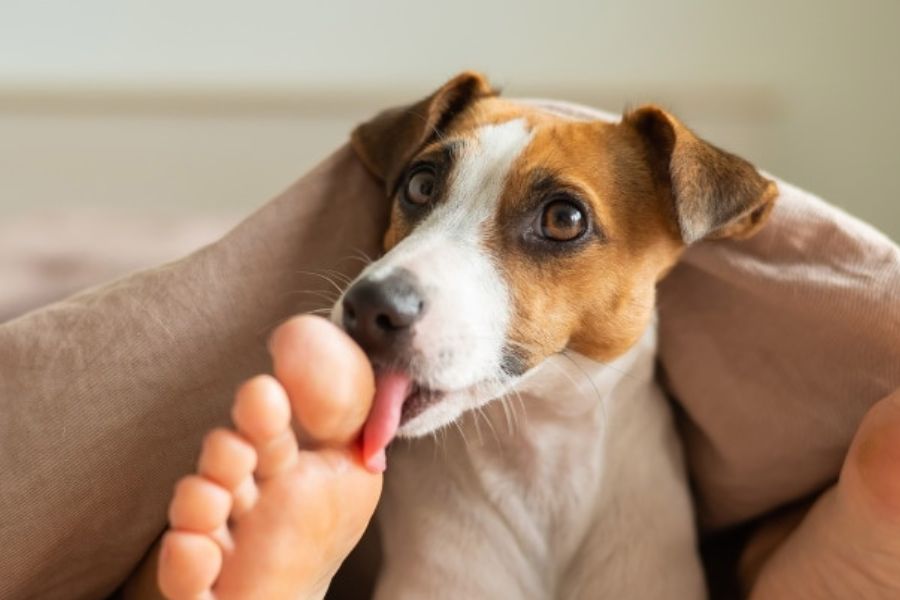 A: Nearly 20 years ago we received a letter from a reader about his uncle: “When my uncle came home in the evenings, he would remove his shoes and socks, and put his feet on a hassock while reading the paper. The dog always went to him immediately and licked his feet all over, especially between the toes. After about three months, he noticed that the athlete’s foot which had plagued him for most of his adult life had gone away!”

We warned readers not to allow dogs to lick skin with open wounds. That’s because dogs carry bacteria in their mouths that could cause infection. We also have been scolded by a vet tech who said that licking people’s feet could make the dog sick.

Some people report that beets also are helpful for reduce urination at night. That may be because compounds in beets help relax smooth muscle. Advertising

Obviously, my husband has not shared in the relaxing experience of having two small dogs lick his feet. So being the wonderful wife and partner that I am, I can’t wait to show my loving husband this article.

If you enjoy the taste of hot chili peppers, you could add salsa or hot sauce to your meals. If you don’t, you might want to take cayenne-pepper pills.

After about three months, he noticed that the athlete’s foot which had plagued him for most of his adult life had gone away!” We warned readers not to allow dogs to lick skin with open wounds. That’s because they carry bacteria in their mouths that could cause infection.

Can dogs get sick from licking athlete’s foot?

Can my dog catch my athlete’s foot?